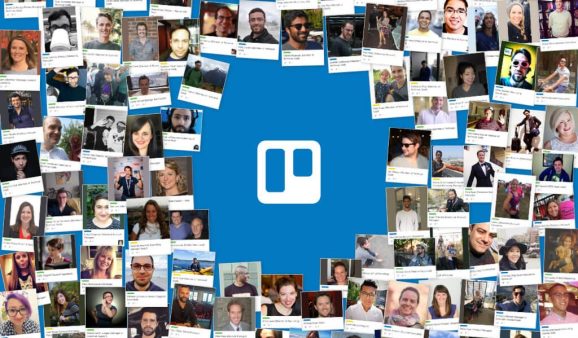 Trello, a Kanban-inspired project management app organized around the idea of boards containing cards with attachments, to-do items, and comments, is getting a few much-needed improvements. Today, the Trello team announced that Trello Enterprise, a corporate-class subscription tier launched in 2015, will gain 13 new features this week, including improved admin controls, a new visibility setting, and compliance certifications.

It’s the largest product update in Trello Enterprise’s history, the Atlassian subsidiary says, but it’s a tad bittersweet — a new restriction will be imposed on teams that use the free version of Trello. Moving forward, they’ll be limited to a maximum of 10 open boards at any given time. (Enterprise and Trello Business Class users get unlimited boards, and existing free teams will be able  to add up to 10 additional boards until May 1, 2019.)

“As we look to the future, we’re focused on making Trello the go-to tool for managing projects at work,” cofounder and Trello head Michael Pryor told VentureBeat in an email. “With the new Trello Enterprise features, we’re taking a big step forward toward this vision. We’re excited to deliver the highly requested security, admin control, and management settings big companies need to deploy Trello within their organizations.”

Above: The new Power-Up administration features in Trello Enterprise.

So what’s new in Trello Enterprise, specifically? Butler — the automation tool Trello acquired in December — is now available at no cost to Business Class and Enterprise customers. Enterprise customers can use an unlimited number of commands and access “advanced features,” while free Trello accounts get a stripped-down Butler that occupies a single plugin slot.

Butler, not unlike IFTTT, is a rules-based system that lets Trello users program routines using natural language. It consists of two components: Butler Bot, an autonomous bot within Trello that performs tasks on a user’s behalf, and an app that adds task-triggering buttons to the right-hand list of actions in Trello cards. Butler’s “trigger” commands kick off tasks when something occurs, like when a due date’s added to a card, while “actions” automate chores, like adding checklists and renaming cards.

In addition to Butler, Enterprise users have a new visibility setting from which to choose: Organization. It joins the existing Private, Team, and Public options and enables groups of teams to more easily share content among themselves.

As for the new admin controls, they touch on a range of categories, including permissions management, user management, and analytics. Within the revamped Trello Enterprise, managers can filter members by the date they were last active, enforce single sign-on (SSO), and impose restrictions on membership, board creation and deletion, and team invites. Additionally, they’re able to grant members admin status and deactivate or reactive accounts, and they can exercise greater control over which plugins users integrate.

Above: The new view in Enterprise.

Trello has come a long way in the seven years since Fog Creek Software debuted it publicly and Atlassian acquired it for $425 million. Today, it boasts a robust ecosystem of third-party Chrome extensions and native apps called Power-Ups, not to mention integrations with services like Bitbucket, Google Drive, Dropbox, Salesforce, Slack, and other apps via its API. But it faces stiff competition from cloud-based workflow startup Coda, which became generally available in early February, and from Airtable, an Excel-like extensible spreadsheet creator that secured $100 million at a valuation of $1.1 billion.

Still, Tello has managed to attract somewhere north of 35 million registered users to date and over 1 million active teams. And Atlassian says that over 80 percent of the Fortune 500 are using Trello “in some capacity.” That might be short of G Suite’s hundreds of millions, but it’s nothing to sneeze at — particularly considering AirTable’s last reported figure of 80,000 paying customers.

Trello Business class starts at $12.50 per user per month and adds priority support, the ability to bulk-add members through Google Apps, domain-restricted invites, bulk data exporting, and other tools. Trello Enterprise — which includes all of Business Class’ features plus support for SSO — is variably priced.