Who knew self-storage was a gigantic industry? According to some analysts’ estimations, it stands at $38 billion annually in the U.S. In the first eight months of 2017 alone, storage locker incumbents and startups spent about $2.27 billion to expand their infrastructures — more than the entirety of 2016’s $1.9 billion spend.

MakeSpace is one of the many firms vying for a shot at the top, and it’s aggressively raising funds to do it. Today the New York startup announced that it has secured $30 million in financing from information management services company Iron Mountain and that the two are entering a strategic partnership. It also said it’s acquiring Stashable, Iron Mountain’s valet consumer storage business, and will provide 2.1 million cubic feet of storage to Iron Mountain and its various subsidiaries. (That might sound like a lot of space, but it’s a tiny fraction of Iron Mountain’s more than 90 million square feet across 1,450 facilities in 50 countries.)

The fresh capital comes after MakeSpace’s $30 million series C raise in April 2017 and an $8 million series A in April 2014, which included individual contributions from NBA star Carmelo Anthony and rap legend Nasir Jones (Nas). (Winklevoss Capital, the investment vehicle for the Winklevoss twins, is another high-profile investor.) This brings MakeSpace’s total raised to $103 million, which CEO Rahul Gandhi says will enable the company to immediately scale to 20 new markets — including San Francisco, Boston, San Diego, Seattle, Philadelphia, and Toronto — bringing its total footprint to 24 markets.

Prior to today’s acquisition, MakeSpace had “tens of thousands” of customers across the four cities where it operated (New York City, Chicago, Los Angeles, and Washington, D.C.), and “well over” 200 employees. 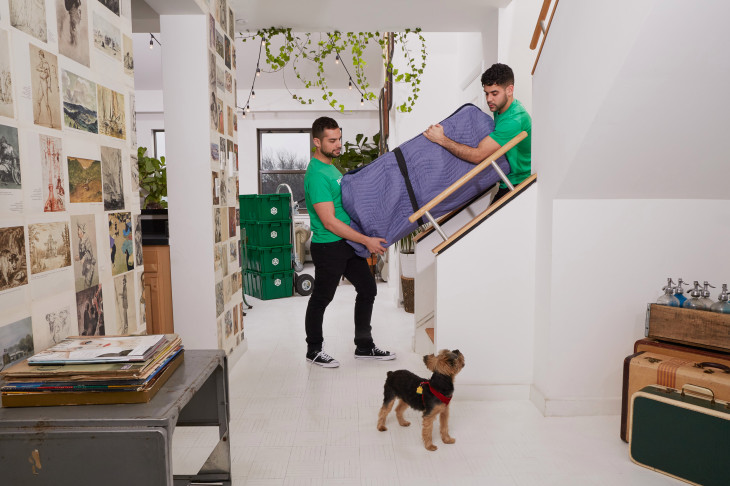 “Iron Mountain provides a massive global storage footprint, along with decades of operational experience. When combined with our industry-leading proprietary technology, customer service, and scalable go-to-market strategy, we have the opportunity to be operationally superior to competitors and exceed consumer demand for hassle-free storage,” said Gandhi. “We’re thrilled to work with the leader in information management and secure storage as we work to achieve MakeSpace’s mission of making more space easily accessible to everybody.”

MakeSpace, which was founded in 2013 by Gandhi, Adam LeVasseur, and Sam Rosen, aims to take the pain out of self-storage by employing a large workforce that tenders and transports items to camera- and alarm-outfitted storage hubs. Here’s how it works: Customers choose from one of several storage plans — ranging from a 2×2 (16 cubic feet) space to a 10×20 (800 cubic feet) space — which vary in price depending on locale. In New York City, pricing ranges from $69 up to $459 per month. No matter the plan, MakeSpace handles pickups and deliveries — either can be scheduled from its online dashboard — and its team members snap and upload photos of every item stowed to a digital catalog, where they can be managed individually or in bulk.

The first pickup is free, as are once-per-month hour-long appointments, with additional appointments available for $50 per hour per mover, with a one-hour minimum. Included in each subscription is a basic protection plan that covers $0.60 per pound of stored stuff; the $15 per month silver and $20 per month gold plans up the maximum to $1,000 and $2,000, respectively.

MakeSpace is far from the only startup in the self-storage market. Just last month, Los Angeles-based Clutter raised $200 million in a series D round led by SoftBank’s Vision Fund, while San Francisco-based rival Trove has attracted $8 million. Two others, Closetbox and Costockage, tweak the formula slightly — the former picks up and stores packed boxes and furniture, and the latter, which is headquartered in Paris, offers a peer-to-peer storage marketplace.

But Iron Mountain executive vice president and general manager of information and records Deirdre Evens was impressed by MakeSpace’s vision and execution.  “We’re excited to join forces with MakeSpace on a consumer storage offering that will help change the market landscape,” Evens said. “Iron Mountain’s storage business has been built on securing and protecting valuable records and assets, a value proposition that can be extended into other categories and markets, from artwork, film, and music assets to areas like consumers’ valued personal items. The combination of MakeSpace’s consumer storage brand and front-end customer platform with our operational scale, expertise managing the world’s most valuable assets, and brand promise of trust and security will allow us to deliver even more value for across our storage network.”