Close to 10 percent of the U.K.’s workforce — about 1.5 million workers — occupy jobs that are at “high risk” of automation. That’s according to a study today published by the U.K.’s Office for National Statistics (ONS), which found that of the 19.9 million people the department surveyed in 2017, approximately 7.4 percent could be replaced by autonomous machines in the coming years. (That’s a slight improvement from 2011, actually, when the number of at-risk jobs stood at 8.1 percent.)

ONS forecasts that service workers — chiefly waiters and waitresses, retail inventory restockers, and entry-level salespeople — will be disproportionately affected; it reports that 25.3 percent of supermarket checkout jobs disappeared between 2011 and 2017. And it expects agricultural, automotive, and service industries won’t fare much better — they’ve seen a collective 15 percent decline in the same timeframe.

Women, who in 2017 held 70.2 percent of high-risk jobs, might bear the brunt of the coming labor market shifts. But male workers between the ages of 35 and 39 are less likely to be impacted — just 1.3 percent currently occupy roles the ONS has designated as “high risk.” 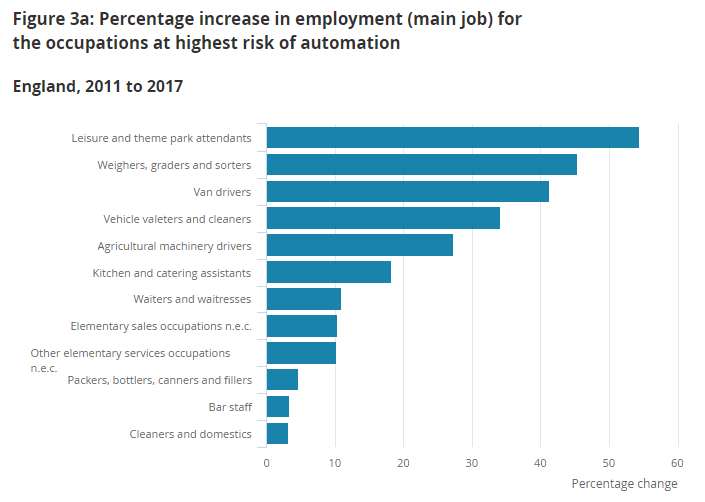 The U.K. isn’t the only country with a job market that’s being radically transformed by AI. In a report late last year, Forrester found that automation — specifically chatbot, internet-of-things (IoT) events, and analytics platforms — could eliminate 10 percent of U.S. jobs in the coming months as well. And the World Economic Forum, PricewaterhouseCoopers, McKinsey Global Institute, and Gartner have predicted that AI could make redundant as many as 75 million jobs by 2025, and depress the number of jobs requiring “low digital skills” to 30 percent in 2030 from the current 40 percent.

It’s not all bad news, though.

This past summer, a study published by PricewaterhouseCoopers (PwC) suggested that by 2037 in the U.K., widespread adoption of AI could generate more jobs than it displaces. The health care market alone stands to grow by 1 million (about a fifth of its existing jobs), according to PwC, while law, accounting, and advertising firms could gain as many as half a million jobs.

A separate Gartner survey predicted AI would create a net 500,000 jobs by 2020 and 2 million by 2025, in part by creating “new ways of working.” Moreover, McKinsey forecasts that AI could contribute an additional 1.2 percent to gross domestic product growth (GDP) for the next decade, and that it could help to capture an additional 20-25 percent in net economic benefits (equating to $13 trillion globally) in the next 12 years.