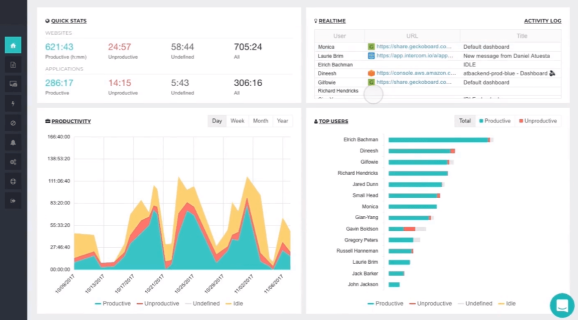 ActivTrak, an Austin, Texas-based cloud productivity monitoring software provider, today announced that it has raised $20 million in series A funding from Elsewhere Partners, a growth-stage venture capital firm that principally invests in B2B startups. The fresh capital — which comes as sign-ups for its freemium and paid subscription services exceed 130,000 and 5,000, respectively — will be used to maintain its office in Dallas and establish a headquarters in Austin, Texas, said cofounder Herb Axilrod.

“We considered investment from many sources, but we wanted more than a check,” Axilrod added. “My cofounder, Anton Seidler, and I were impressed with what Elsewhere Partners brought to the table with their team of operating advisors, deep experience in the software market, and access to talent that understood our business model and could provide the acceleration we sought for the company.”

ActivTrak’s cloud-based solution delivers aggregated data and analytics that “quantify” employee productivity, as Axilrod put it. A client installs to workers’ desktops to capture and record activity logs (including partially redacted screenshots) during preset timeframes, which might include usernames, app title bars, and website URLs, in addition to things like USB activity. That all gets transmitted in an end-to-end encrypted fashion to a web dashboard, where clients populate an ordered table prominently displaying their estimated web usage, app usage, and “productive” and “unproductive” time.

ActivTrak’s software — which can be hosted on in-house infrastructure or in the cloud, on Amazon Web Services — affords administrators a fair degree of control over PCs. They’re able to block websites, create alarms to capture suspicious activity (like USB file transfers, IP address connections, and website or app access), and monitor web and app traffic in real time. (When an alarm is triggered, they get a screenshot and email notification instantly and can configure the client to close offending apps and services automatically.) Moreover, the tool supports advanced SQL queries, enabling custom report creation with internal data sources, and it integrates via webhooks into business intelligence software like Slack, Basecamp, GitHub, Tableau, Trello, Jira, and Google Data Studio.

Sound a little dystopian? Perhaps. But Elsewhere Partners’ Chris Pacitti says that ActivTrak merely provides clients a window into their workforce. Indeed, the global employee monitoring market stands at $1,071 billion today and is expected to see a compound annual growth rate of 25.5 percent, led by a host of well-established players like Teramind, Time Doctor, VeriClock, and Hubstaff.

“Elsewhere Partners is focused on helping B2B software innovators build on their early successes and take their businesses to the next stage. ActivTrak has achieved considerable customer adoption with no outside capital and has the potential to become the mid-market leader for workforce analytics.”