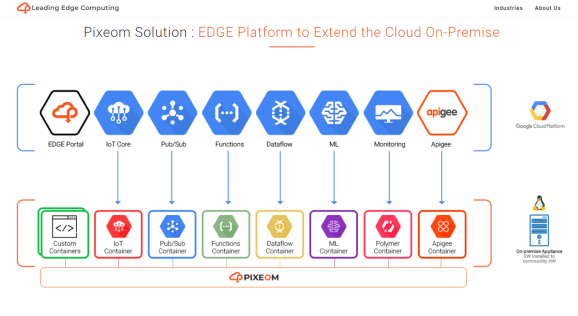 Given how dramatically containerized apps and microservices can simplify software management, it comes as no real surprise that enterprise adoption is on an upswing. According to 451 Research, the app container market could be worth a whopping $2.7 billion by 2020 (up from $762 million in 2016), and Portworx reports that over 30 percent of companies spent $500,000-plus on license and usage fees for container tech in 2017. Moreover, analysts at Gartner predict that in the next year, roughly 50 percent of companies will use containers in some form.

“While there are other cloud services on the market today, Pixeom is transformational,” said cofounder and chairman Sam Nagar, who previously worked as a software engineer at Microsoft on Hyper-V and PowerShell, developing the large-scale virtualization and management capabilities of Windows Server. “We have created a truly boundary-less … platform without rules and limits imposed on its users by other cloud service providers.”

Pixeom’s edge computing platform enables cloud service providers to package and orchestrate containerized apps like those found in Google Cloud Platform, Amazon Web Services, or Microsoft Azure, so that they’re able to run on edge infrastructure comprising a range of hardware and operating systems. Using “edge versions” of AI, data processing, messaging, stream processing, and analytics services recreated to match on-premises APIs, admins can create and submit containerized apps (or adapt existing apps) and publish them to public or private portals, from where they can be installed to edge devices and managed on-premises.

Pixeom’s service as it exists today is something of a pivot for the startup, which in 2014 launched a Kickstarter for what Nagar described as a personal, encrypted cloud device. The eponymous Pixeom X1, which packed a Raspberry Pi, plugged into a network via Ethernet and enabled customers to join a wider Pixeom community through which they could share apps and content.

The crowdfunded peripheral raised over $75,000 in the end, exceeding its goal by over $15,000. But despite the early success, Nagar and his sister and cofounder Karishma Nagar made the strategic decision in the intervening years to pursue a hardware-agnostic route. It paid dividends: Pixeom — which counts Google, Samsung, Honeywell, Comcast, and Vodafone among its ecosystem partners — now has “dozens” of Fortune 500 companies in the energy, telecom, manufacturing, security, retail, and health care sectors, and employs a workforce of more than 80 people.