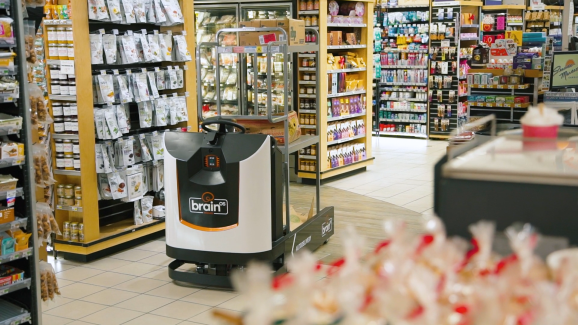 Why lug around heavy packages, bags, and boxes when a machine will uncomplainingly do it for you? Enter San Diego startup Brain Corp‘s AutoDelivery, a proof-of-concept autonomous, touchscreen-controlled delivery robot that’s designed to work in spaces such as retail stores, warehouses, and factories.

AutoDelivery, which will make its formal debut at the ProMat Show 2019 in Chicago next week, can tow several cart types along preconfigured routes and joins another Brain Corp showroom product that’s been tested in Jimbo’s grocery stores around San Diego. Like EMMA, Autodelivery boasts cameras, 4G LTE connectivity, and routing algorithms that allow it to learn its way around a store quickly. Underlying it is Brain Corp’s software management layer, BrainOS.

BrainOS — the brainchild of Brain Corp CEO Dr. Eugene Izhikevich and executive vice president Dr. Allen Gruber — is tailored to the needs of partners whose robots operate in fulfillment centers, airports, and elsewhere, Dr. Izhikevich told VentureBeat in an earlier interview. A learn-by-demonstration feature “teaches” managed machines to perform tasks automatically based on manual operations; its mapping and navigation algorithms are optimized for congested indoor locations with obstacles and tight corridors; and the devices it orchestrates coordinate with one another over on-premises and cloud networks, downloading new configuration files and updates as they idle.

Dr. Izhikevich said the bulk of Brain Corp’s current work is focused on exploring new industries and applications for BrainOS, with the goal of becoming a “robotics industry standard technology.” It also intends to partner with robotics startups to “expand [BrainOS] into applications beyond floorcare,” specifically in the areas of materials handling and store operations.

“The integration of BrainOS into not just another form factor, but an entirely new vertical outside of floor care further proves the robustness and extensibility of the BrainOS platform,” he said. “With the introduction of AutoDelivery, we are another step closer to fulfilling our vision of a world where the lives of people are made safer, easier, more productive, and more fulﬁlling with the help of robots.”

Brain Corp in December announced that it had entered a relationship with Walmart to supply the retailer’s stores with “AI services,” building on a pilot program involving BrainOS-powered floor scrubbers in Walmart locations across the U.S. More recently, it announced a partnership with Copenhagen-based Nilfisk, which will license BrainOS for its portfolio of connected autonomous cleaning solutions.

Brain Corp was founded in 2009, and employs a staff of “well over” 200 people. Last summer, it raised $114 million in funding led by SoftBank’s Vision Fund and Qualcomm Ventures (bringing its total raised to $125 million), and secured a partnership with floor cleaning company Tennant.