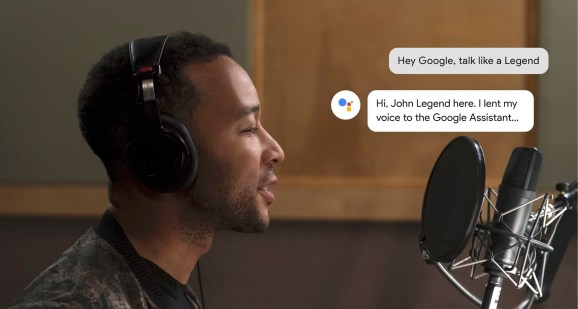 Singer John Legend is bringing his melodious voice to Google Assistant users in the United States. Starting today, users will be able to access Legend’s voice on any Home smart speaker, smart display, or smartphone.

The likeness of Legend’s voice will only be available for a limited time, a company spokesperson told VentureBeat in an email.

Legend’s voice will be able to handle a number of commonly heard personality-related questions or commands, such as “Tell me a joke,” “What’s your favorite kind of music?” and “Compliment me.”

The star will also do the singing any time you say “Sing ‘Happy Birthday’,” “Serenade me,” or “Sing a song.”

There will also be a number of John Legend-related Easter eggs and answers to obscure questions like “Why is the sky blue?” “How do you cook bacon in the oven?” and “Is Venus the same size as the Earth?”

A Google spokesperson told VentureBeat in January that initial plans to make the voice of John Legend available with Google Assistant had been delayed.

There was a time when Google Assistant only had one voice, but today there are six voices to choose from, as well as assistants with British, Australian, and Indian accents.

Google introduced an option for a male Google Assistant and the six new voices last year.

First introduced in 2017 by DeepMind, WaveNet has been used to create all six of Google Assistant’s available voice options.

It’s easy to imagine the incorporation of John Legend as just the beginning of celebrity cameos with Google Assistant. A short list of familiar voices could be a way to broaden users’ options for personalizing their Google Assistant. AI assistants made to match a user’s mood or personality could be another step in this direction.

Why the voices of Scarlett Johansson, Morgan Freeman, and Louise Belcher on Bob’s Burgers haven’t yet been added, for example, is a mystery.

Look for more news on this front next month when Google is expected to roll out a number of new features and upgrades at the I/O developer conference May 7-9 in Mountain View, California.