Microsoft today released the first Edge builds based on Google’s Chromium open source project, the same browser that Google’s Chrome is based on. Microsoft is even adopting the same naming scheme that Google uses for Chrome development: It is debuting Canary (preview builds that will be updated daily) and Developer builds (preview builds that will be updated weekly) today. They can both be installed alongside the old Edge as well as each other. You can download these builds now from the Microsoft Edge Insider site.

Here is how Microsoft differentiates the two channels:

Every night, we produce a build of Microsoft Edge — if it passes automated testing, we’ll release it to the Canary channel. We use this same channel internally to validate bug fixes and test brand new features. The Canary channel is truly the bleeding edge, so you may discover bugs before we’ve had a chance to discover and fix them. If you’re eager for the latest bits and don’t mind risking a bug or two, this is the channel for you.

If you prefer a build with slightly more testing, you might be interested in the Dev channel. The Dev channel is still relatively fresh — it’s the best build of the week from the Canary channel. We look at several sources, like user feedback, automated test results, performance metrics, and telemetry, to choose the right Canary build to promote to the Dev channel. If you want to use the latest development version of Microsoft Edge as a daily driver, this is the channel for you. We expect most users will be on the Dev channel.

In December, Microsoft embraced Chromium for Edge development on the desktop, announced it is decoupling Edge updates from Windows 10 updates, and said that Edge is coming to all supported versions of Windows and to macOS. The company also promised that the first preview builds of the Chromium-powered Edge would arrive “in early 2019,” and while it is starting to deliver on that today, the first builds are only for Windows 10 64-bit in English. Microsoft confirmed today that Beta builds are coming “in the future” and that support for 32-bit, other languages, and other operating systems “will also come over time.” 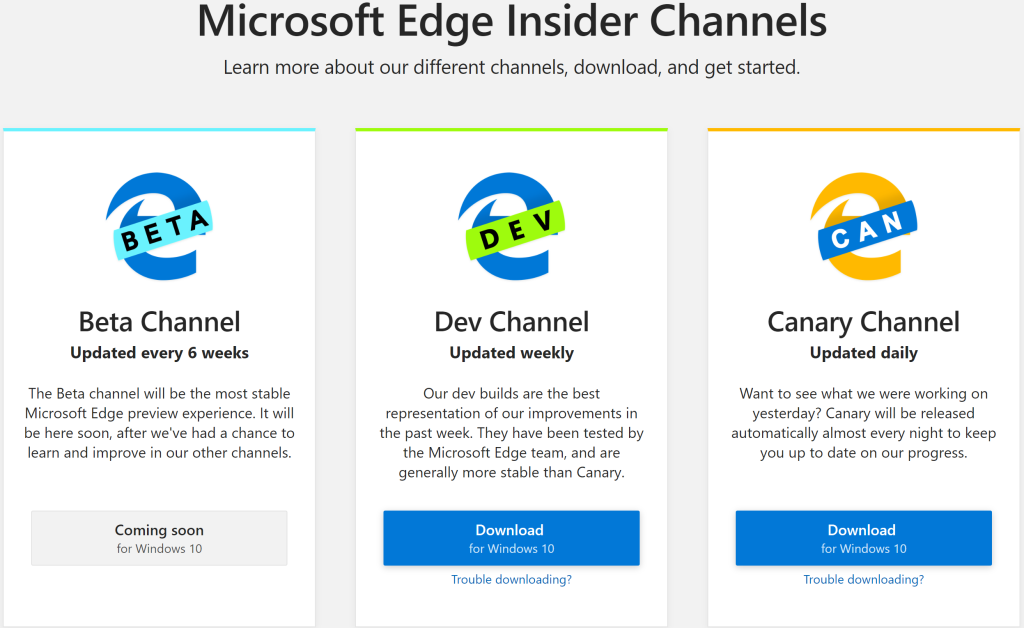 Microsoft gave us access last week to an early build of Chromium Edge. The browser feels snappy and stable for a preview. That said, don’t expect it to outperform Chrome or even the old Edge.

“In these first builds we are very much focused on the fundamentals and have not yet included a wide range of feature and language support that will come later,” Joe Belfiore, corporate vice president in Microsoft’s operating systems group, said in a statement. “We look forward to people starting to kick the tires and will be refining the feature set over time based on the feedback we receive.” 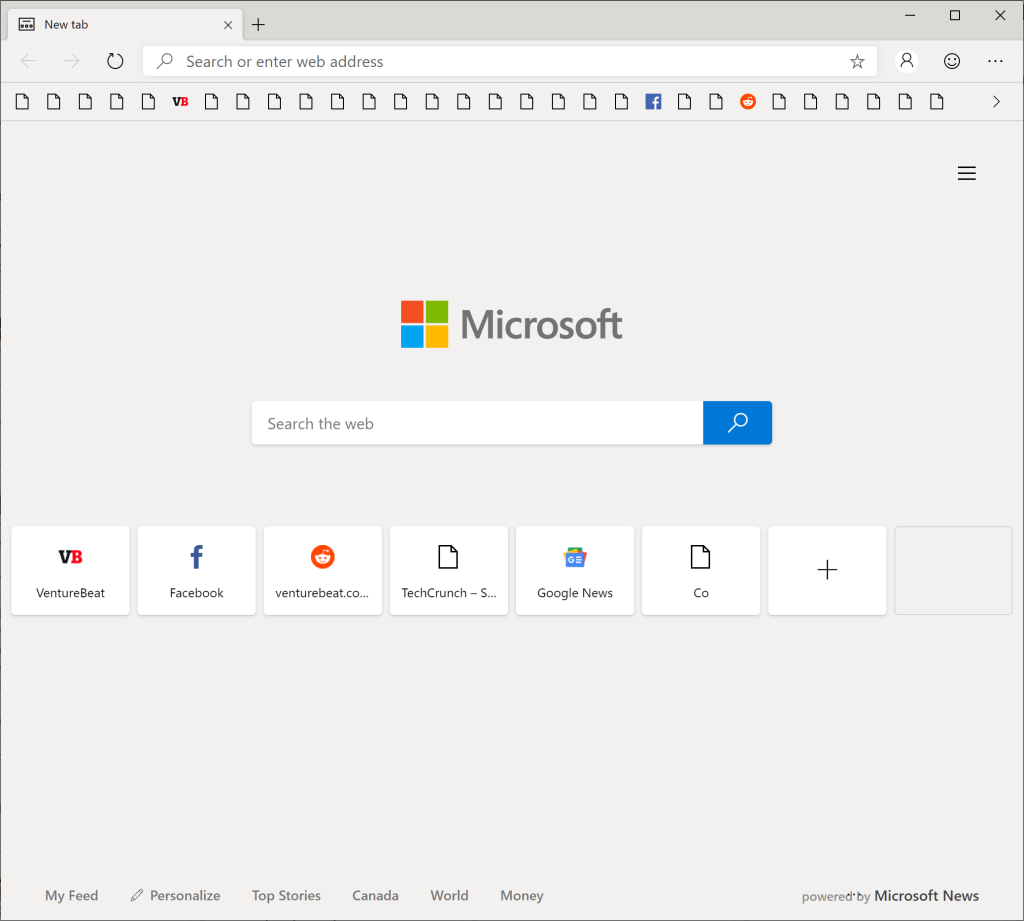 Here are a few changes you will notice in the preview builds: 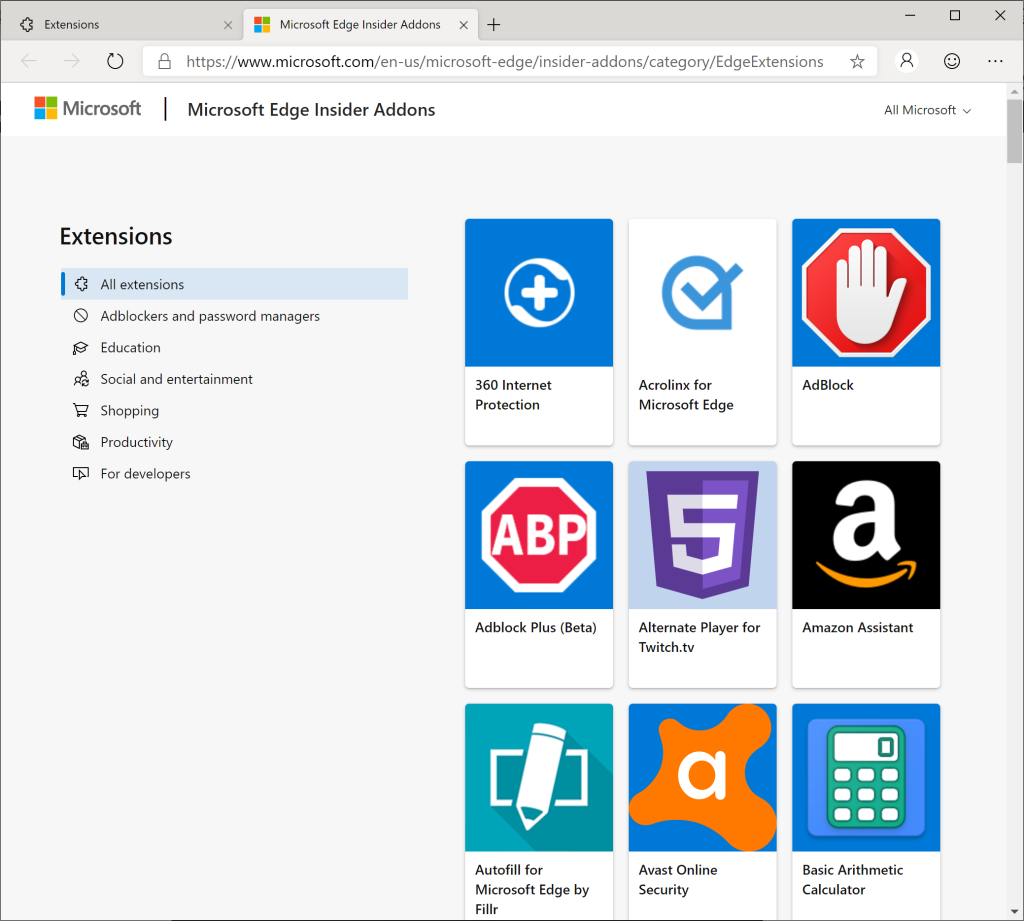 That last point is worth explaining further. Chromium Edge users can install extensions from the Microsoft Store (enabled by default) that extension developers have submitted and the company has confirmed work well with Edge. At the same time, Microsoft has added the capability for Chromium Edge users to opt into downloading and installing extensions from the Chrome Web store (disabled by default). Think of this option as similar to how Android users have to enable an option to “install unknown apps” if they want to use third-party app stores. 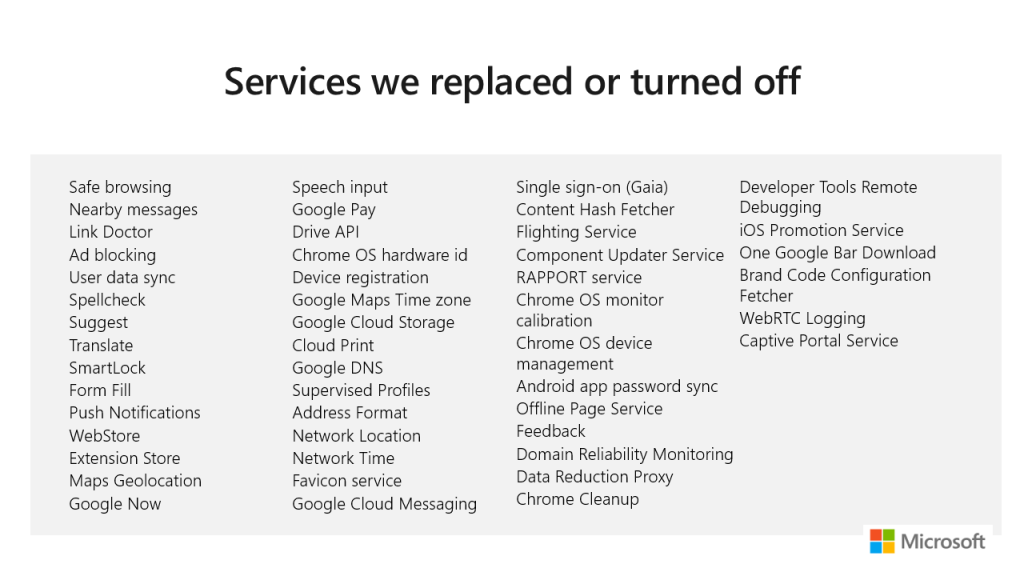 Update at 1:20 p.m. Pacific: And above you can see everything Google-related that Microsoft has removed, courtesy of Walking Cat.

Features still in the works

Again, the new Edge is still in an early preview phase. It is not at all feature-complete, and plenty of work still needs to be done. Here are a few things in the pipeline:

Microsoft isn’t releasing a feature-complete browser because it’s soliciting feedback from the Chromium open source community, extension developers, and web developers in general. That feedback will result in not only a better first stable release of Chromium Edge, but improve other browsers built using Chromium as well.

Indeed, Microsoft has started making contributions to the Chromium open source project (over 275 commits since December) in areas like accessibility, smooth scrolling support, Windows Hello integration, touch, and ARM64. (Microsoft likes to point out that Edge is the only major browser with a 100 percent HTML5Accessbility score and is known for having solid touch scrolling performance.)

Switching to the Chromium-powered Edge

Microsoft still hasn’t quite decided how it will switch old Edge users to the new Chromium Edge, but here’s the plan as it stands today. Over the coming months, the Edge Insider program will scale up to include more language versions, other Windows versions, macOS, and more users in general. Once Microsoft deems the quality, reliability, stability, compatibility, and features high enough, it will replace the old Edge with Chromium Edge. This will take the form of a normal update — on Windows it will not be tied to an operating system update as Edge updates have been in the past. After that, Edge will be updated every six weeks or so, similarly to how often Chrome and Firefox are updated.

If you’re not comfortable using preview builds, stick with the current version of Edge. Chromium Edge is not at the beta stage yet, so non-technical users and businesses should wait.

While these preview builds are certainly not ready to be used as your default browser, developers should switch to them for all their Edge testing purposes. Sure, Microsoft plans to continue supporting the Edge rendering engine EdgeHTML and the Chakra JavaScript engine, but Edge’s future lies with the Blink rendering engine and V8. You might as well ditch the old Edge now. 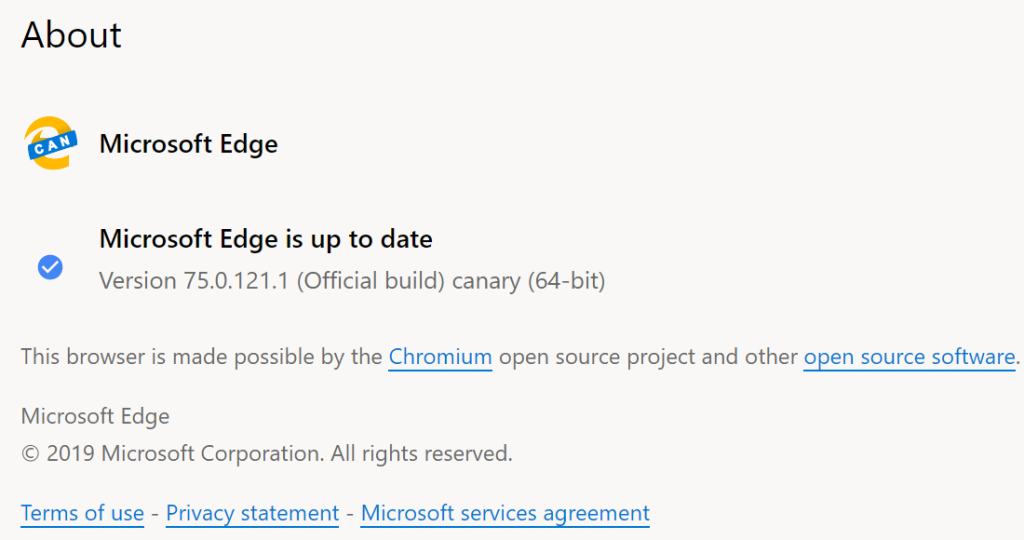 Web developers should also note that Microsoft has updated the user agent string. Chromium Edge has the Chromium user agent string with the addition of the “Edg” token. This is to avoid compatibility issues with the string “Edge” used by the current version of Edge based on EdgeHTML, and is consistent with existing tokens used on Android and iOS.

Microsoft launched Edge in July 2015 as the default browser for, and exclusive to, Windows 10. But it never saw much adoption. Sure, Microsoft claimed Edge had 330 million active devices back in September 2017, but it never did reveal an active user figure beyond “hundreds of millions” (Google said Chrome passed 1 billion active users in May 2015). Edge has 4.40 percent market share today, according to the latest figures from Net Applications. Whether switching to Chromium and adding more operating system support will make a material difference remains to be seen.