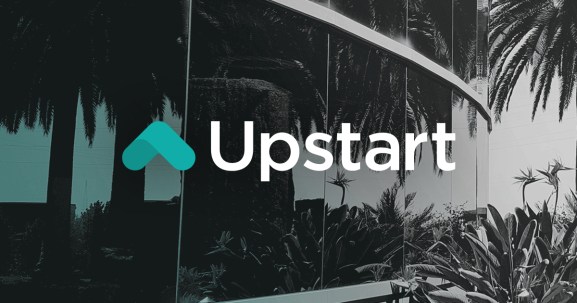 Upstart, a startup founded by ex-Googlers that uses AI to identify who should get a loan and of what size, said today it has raised $50 million. The startup has also inked deals with banks as it looks to expand its lending business.

The series D round for the San Francisco-based startup was led by Progressive Investment Company, Healthcare of Ontario Pension Plan, and First National Bank of Omaha. In total, the seven-year-old startup has raised $160 million to date, with more than $100 million in cash and equity capital in hand. The startup counts Google Ventures, Khosla Ventures, former Google executive chairman Eric Schmidt, Mark Cuban, and Salesforce founder and CEO Marc Benioff among its early investors.

In its seven-year journey, Upstart has scaled its business impressively. More than $3.3 billion in loans have originated from the platform, CEO Dave Girouard said. He told VentureBeat that the startup, which makes most of its revenue from borrower fees or servicing charges, has been profitable since the second half of 2018 — a status it expects to retain throughout this year.

Upstart is among a growing crop of peer-to-peer lending platforms that matches borrowers with those willing to lend. Upstart competes with a score of startups, including Funding Circle, Prosper, and SoFi, that are also attempting to tackle credit-card debt consolidations and small-business loans. These finances are different from typical mortgages and home equity loans that are secured against significant collateral such as a home.

Upstart’s biggest selling point is its use of machine learning to make its credit decisions — that is, who should be eligible to get credit, of what size, and at what rate. The startup largely serves college graduates aged between 28 to 35 with an average of $12,000 in credit card debt, Girouard said. These customers don’t have a comprehensive credit score history.

The startup also uses AI to eliminate fraud and automate most of its verification processes, Girouard said. In the past two years, the startup has fully automated two-thirds of the loans that it approves, he added. This means that a person who is looking to get a loan does not need to provide any documentation or sit through a phone screening.

Upstart said it has inked its first deal with Customers Bank and its BankMobile division as a technology partner, meaning it sees itself as a technology platform instead of a financial institution that would someday finance all the loans itself. First National Bank of Omaha, First Federal Bank of Kansas City, and Accion Chicago will be leveraging Upstart’s technology as part of a similar agreement.

These partnerships are important to Upstart, which has been increasingly trying to expand its licensing business — thereby operating as a “lending-as-a-service” — that sees bank partners share a cut. “With Powered by Upstart, banks and other lenders can leverage Upstart’s AI platform in the form of a white-labeled lending application to power their own lending programs,” an Upstart spokesperson said in a statement. “The Powered by Upstart platform allows banks and other lenders to enforce their own credit policy and lending terms while benefiting from Upstart’s patent-pending risk modeling and automation.”