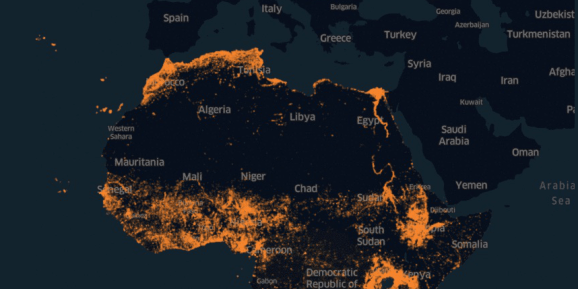 Facebook AI researchers are today making available a new and more accurate version of population heat maps of countries in various parts of the world. Researchers use computer vision in combination with DigitalGlobe satellite imagery and public census data to determine the approximate population of a given area based on the number of human-made structures. Facebook also worked with the World Bank to verify the accuracy of its results.

Researchers plan to map the world’s entire population using the same methods by the end of the year, a spokesperson told VentureBeat in an email.

Facebook AI researchers have also used satellite imagery to detect flooding in the wake of Hurricane Harvey in Texas and fire damage in Santa Rosa, California in 2017.

A detailed map of the 54 nations of the African continent was also introduced today.

The announcement today builds upon imagery for 22 countries introduced in 2016 and 2017 when Facebook first began to provide nongovernmental organizations with detailed population data adjusted with AI. Many African nations were among the initial 22, but also countries like Cambodia, Haiti, Philippines, Sri Lanka, and Thailand.

The maps are made available to nongovernmental organizations as well as government agencies through Facebook’s page on the United Nation’s Humanitarian Data Exchange to ensure they can accurately locate rural communities and account for humanitarian aid needs in a disaster.

The maps do not provide an independent assessment of government census data but rather verify the location of human populations based on the appearance of human-made structures in satellite imagery. No predictions are provided for the number of people in a structure, a company spokesperson said.

Weakly supervised learning is first used to eliminate satellite imagery of areas of trees, water, and places that contain no human-made structures, then use Facebook’s image-recognition engine powered by convolutional neural nets to identify buildings, and then apply an AI model to locate buildings.

“Since it is not feasible to find these buildings by hand, we rely on deep learning to find them,” researchers said in a blog post. “This sort of granularity is crucial for efficient allocation of resources for efforts such as vaccination campaigns.”

More than 11 billion images were analyzed to create Facebook’s population density heat map of Africa. The maps and data will be provided to humanitarian organizations to help them provide aid.

Facebook’s machine learning platform FBLearner Flow and Presto’s Geospatial were used in combination with a ResNet18 neural network trained on one million images to raise Facebook’s accuracy rate in finding building in images to from 81 to 92 percent, outperforming the old model in 75 of 79 mapped territories.

Working with the OpenStreetMap team helped Facebook avoid “developed world bias” in identification of buildings in its training sets, the company said.

The data is actively being used by the Humanitarian OpenStreetMap team and Missing Maps project, an organization cofounded by the Red Cross to find people living in sparsely populated areas. The data is also used internally by Facebook Research’s Connectivity Lab, an initiative to connect people to the internet in rural communities.

The method to determine the actual population of a given area was made by a group of AI researchers and data scientists from Facebook’s Boston office in collaboration with geographic and demographic experts at Columbia University’s Center for International Earth Science Information Network (CIESIN).

No Facebook data has been or will be used in the project, and census and satellite data used contain no personally identifiable information, a company spokesperson told VentureBeat in a statement.