Mozilla is bringing a couple of new privacy- and security-focused features to Firefox today, kicking off with the early-adopter versions of the browser.

So-called “fingerprinting” has emerged as a popular mechanism for tracking web users as they move across the internet inside a browser. It works independently of cookies, and allows companies (including advertisers) to build a picture of an individual over time through tracking a mixture of signals from their machine’s configuration, such as time zone, screen resolution, HTTP headers, and more.

While cookies are fairly easy to spot and block, fingerprinting is much harder to detect. Fingerprinting also happens to be against Mozilla’s recently announced anti-tracking policy, which is why it is working with anti-tracking company Disconnect to compile a list of known domains that serve fingerprinting scripts. So now, in the (alpha) Firefox Nightly 68 and Firefox Beta 67 versions of the browser, users can proactively block any websites that are known to employ fingerprinting techniques.

But this integration will go further than merely stopping spurious tracking techniques. The protection will also extend to malicious cryptomining, sometimes referred to as “cryptojacking,” which is when website operators surreptitiously leverage the power of a user’s computer to mine for cryptocurrency — this not only slows down a machine, but it can also drain the battery and drive up electricity bills.

To activate these two new protections, users need to head to the “Privacy and Security” tab in their browser preferences, and then hit “Content Blocking” and and “Custom” — here it’s just a case of checking the Cryptominers and Fingerprinters boxes. 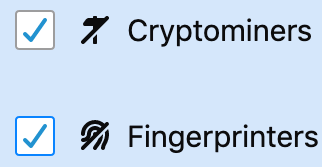 Users can also click on the little privacy shield icon in the address bar to see what protections are activated, and report any problems during the beta phase.

Above: Firefox Nightly: Reporting a problem

It’s clear that Mozilla is going all-in to position Firefox as the ultimate privacy- and security-focused browser. Last year, the company launched a new Facebook Container add-on that isolates all your web browsing activity from Facebook, and is designed to make it harder for the social network to track you when you’re not on its site. Elsewhere, Mozilla also launched a password management tool called Firefox Lockbox, while it introduced a Firefox-branded tool that tells you if your email address has been part of an online breach anywhere.

This latest launch follows Mozilla’s announcement back in August that it was getting tough on trackers, and although it is only an opt-in feature for now in the test versions of Firefox, Mozilla definitely intends for these to be core parts of the main consumer browser in the future.

In the coming weeks, it said, Cryptominers and Fingerprinters will be blocked by default in Firefox Nightly, and in the future it plans to roll these features out to all Firefox users, who will have these protections on by default.