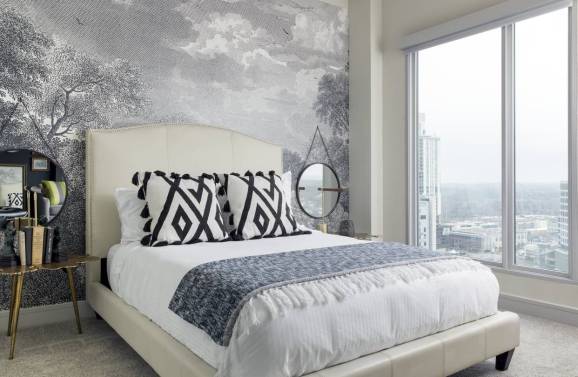 One of Lyric's rental properties.

Late last year, The Information reported that Airbnb was going to invest around $75 million in AJJK-owned Lyric (formerly Parallel), a San Francisco service that leases apartment units and floors, refurbishes them, and transforms them into hotel-like properties for business travelers. It would seem its sources were well-informed: Lyric today confirmed that it’s raised $160 million in series B financing and debt financing led by none other than Airbnb, with participation from a slew of investors including Tishman Speyer, RXR Realty, Obvious Ventures, SineWave, former Twitter CEO Dick Costolo and former Twitter COO Adam Bain, Starwood Capital Group cofounder and chairman Barry Sternlicht, NEA, SignalFire, FifthWall, and Tusk Ventures.

The fresh capital brings Lyric’s total raised to $185 million, following a $15.5 million series A round in February 2018, and will be used to expand its operations and support the buildout of its technology and data platform, said CEO and cofounder Andrew Kitchell. “We’re incredibly excited to have Airbnb, the company that reinvented how we travel, along with renowned real estate partners and elite investors believing in us at Lyric to create a new category of accommodations for the modern traveler.”

Lyric, which launched in 2014, caters its spaces — which it calls Creative Suites — to professionals seeking accommodations for between 2 and 200 days on Airbnb, HomeAway, Booking.com, and other hospitality marketplaces. It partners with local landlords and businesses (including 20 of the National Multifamily Housing Council’s top 50 developers) to build out properties and curate art, music, and coffee programs, and it facilitates site management through a dashboard and backend that secures each location, manages revenue, handles guest registration, and automates background checks and digital access.

All of Lyric’s suites include a Casper mattress, Wi-Fi, connected TVs, and keyless entry, in addition to a fully stocked kitchen, a washer and dryer, and access to fitness centers, pools, and business lounges.

“When people search for beautiful spaces or experiences, what they’re really looking for is a connection to a local community,” Kitchell said. “From the music and artwork we hand-select, to the wallpaper we curate, our job is to be a storyteller for that community or building, and to help guests feel like they are a part of it.”

So far, Lyric — which operates about 1,000 units — has stuck to cities where local governments are amenable to short-term rental businesses, like Chicago, Pittsburgh, Dallas, Houston, Minneapolis, New Orleans, and Philadelphia. And it’s worked with well-known multifamily landlords such as Hines, Bozzuto Group, and Camden Property Trust.

Lyric’s far from the only startup in the soft brand rental business, though. Competitors include WhyHotel and YouRent.com, as well as Sonder, a hospitality company offering hotel-style accomodations that recently secured $135 million in venture capital and which has hosted more than 200,000 guests across 2,200 leased and manged units in 12 cities. Others include Stay Alfred, OneFineStay, RedAwning, and Oasis Collection, the last of which has raised over $35 million and runs about 2,500 units.

Even big-name brands like Marriott are experimenting with home sharing. The Bethesda, Maryland company’s rental management subbrand Hostmaker offers international travelers access to more than 200 homes in London, all of which it says were selected for their “consistency” and “quality.”

For its part, Airbnb in 2016 launched Friendly Buildings Program, a program under which landlords put rental units on its platform. As of last August, there were 13,000 listings.