Google announced that it will begin rolling out new browser and search engine options to Android users in the European Economic Area (EEA). The move comes nine months after the Alphabet subsidiary was hit with a $5 billion fine by EU antitrust regulators for the way it reportedly forced manufacturers to preinstall certain Google apps on Android devices.

While Google has long argued that manufacturers are free to do as they please with Android, given that the operating system is released under an open source license, to access features such as YouTube and Google Maps they must also preinstall a full suite of Google apps, which includes Chrome as the default browser and Google Search as the default search engine.

This is what EU regulators deemed anticompetitive, which is why back in October Google announced it would overhaul its European licensing model to charge device makers a fee to preinstall its apps — including YouTube, Google Maps, and Gmail — while also offering them Google Play, Chrome and Search under separate licenses. That, it seems, wasn’t enough for European regulators, which is why Google revealed last month that it would proactively offer new and existing Android users a choice of browsers and search engines.

We now know that this rollout will kick off from today and continue over the next few weeks, according to Google product management director Paul Gennai, who outlined the change in a blog post. “Following the changes we made to comply with the European Commission’s ruling last year, we’ll start presenting new screens to Android users in Europe with an option to download search apps and browsers,” Gennai said.

We also now know how these options will look. Two screens will each offer five options for installing services that compete with Google, and they will be displayed the first time a user opens Google Play after an upcoming Android update.

The alternatives will vary by country, but a user may, for example, be offered the option to install Firefox, Microsoft Edge, Opera, or Puffin as their browser of choice. Or they may be invited to download DuckDuckGo or Qwant as their search engine. 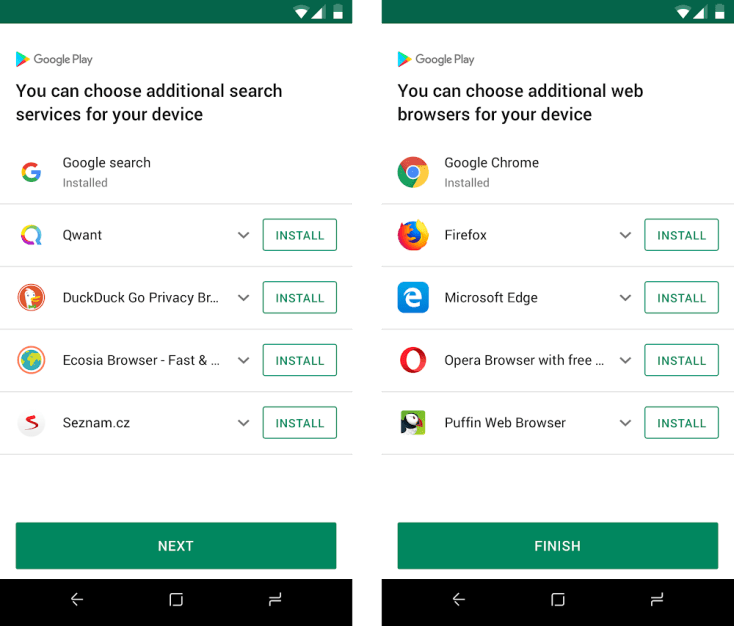 If they elect to install one (or more) of the apps, a user will be shown an additional screen that guides them through the process of setting it up, including how to set defaults.

Android will also prompt users to set their default search engine inside Chrome if they have installed a new third-party search app.

Above: Google Chrome will prompt the user to change their default search engine.

It’s not entirely clear how much of a difference this will make to Chrome or Google Search’s dominance in terms of usage on Android — users typically prefer the path of least resistance when it comes to using the internet on their phones. If they’re already using Chrome and Google Search and their needs are being met, we might end up seeing millions of European Android users simply getting frustrated and skipping the new options.

But this move should help Google appease European regulators. The changes Google started implementing last October would only have affected new mobile phones, and even then it would only have applied if a mobile phone maker had chosen to bypass Google’s default services. This latest update apples to all Android users — new and existing — regardless of whether a manufacturer is using an alternative default search engine and browser or not.

These latest updates may be only a first step in terms of meeting European competition requirements, and they will also likely change based on feedback, according to Gennai, who said the company “will be evolving the implementation over time.”

Google’s woes continue elsewhere across Europe, as it was recently hit with another $1.69 billion fine over AdSense antitrust abuses, in addition to a $57 million levy by France’s data privacy body.