The global ride-hailing market was reportedly valued at more than $61 billion in 2018, a figure that could rise to nearly $220 billion by 2025. With Lyft recently becoming the first ride-hailing company to go public and Uber preparing to follow suit, calling the e-taxi industry a big business is something of an understatement.

But if there is one ongoing complaint from the people powering this burgeoning industry, it’s that the pay is dismal. After expenses, taxes, and other deductions, the average ride-hailing driver reportedly earns very little. A recent report also indicated that Uber and Lyft will often apply surge pricing to riders but not pass the increased fees on to the driver.

Against this backdrop, some third-party services have emerged to try to help drivers earn more.

Pittsburgh-based Gridwise claims it can help drivers earn as much as 39% more per hour by leveraging vast swathes of data to tell them where they should be, and when. Founded in 2016, the Techstars alum has expanded to 18 cities across the U.S. so far. This week, it launched in San Francisco and San Jose, and it also announced a fresh $900,000 in funding from Swallow Point Ventures, Quaker Capital, Innovation Works URA (Pittsburgh), and a host of angel investors. The company has now raised $1.7 million.

Gridwise collates data from myriad third-party APIs, including traffic services, social media, weather, events, and local news, as well as leveraging crowdsourced data from its own network of drivers, who install a dedicated mobile app on their phones.

Some 40,000 drivers use the Gridwise app, the company said, and each receives alerts for the best times and days to drive based on factors like airport congestion, whether it’s raining, and pickup locations that get hot due to major events, such as concerts. 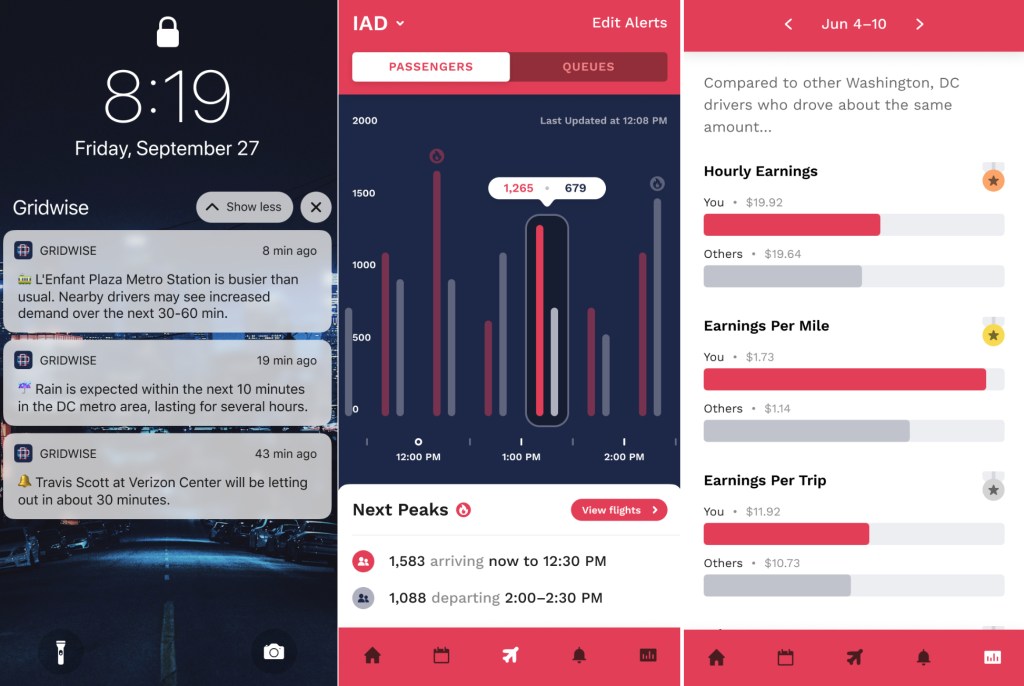 Above: The Gridwise app

Gridwise offers a free basic service, which includes notifications based on airport flight data, local events, and weather, along with performance features that track drivers’ mileage, time, earnings, and trips. For $10 per month or $96 per year, they can also upgrade to Gridwise Plus, which provides access to additional features, such as 24-hour airport graphs, real-time flight status, and other types of alerts.

In some regards, Gridwise is a little like PredictHQ, a startup that emerged from stealth last year with $10 million in funding. PredictHQ also aggregates data sets from various third-party sources and throws its own proprietary and “hard to find” data into the mix — and then bundles all this into a single API that it licenses to companies such as Uber, Domino’s, and Booking.com. The main differentiator with Gridwise, of course, is that it targets drivers directly. Moreover, it garners data from drivers across multiple ride-hailing services — including Uber, Lyft, and Via — and feeds this information back into the Gridwise data stream.

“We have a much deeper focus on ride-share use cases, and we possess validated outcome data from our driver network to support building models for predicting demand across multiple ride-share services,” Gridwise CEO and cofounder Ryan Green told VentureBeat.

It’s also worth highlighting another startup, called Cargo, which has been helping drivers earn extra cash by selling stuff to passengers from their cars. It’s a completely different proposition from Gridwise, of course, but the goal of helping drivers earn more money is the same. Uber officially partnered with Cargo last summer, before the latter went on to raise more than $22 million from notable investors that include Peter Thiel’s Founders Fund.

So Gridwise, it seems, is onto something — the ride-hailing industry is big and getting bigger. And although the company’s seed extension is modest, it speaks volumes about the side industries cropping up around the mobile-focused transport networks offered by the likes of Uber and Lyft.

“As the industry continues to change and we’re seeing one of the biggest players evolve post-IPO, we wanted to offer our services to even more drivers,” Green said. “This announcement highlights our nationwide expansion push in 2019.”

While the extra funding will certainly help Gridwise expand across the U.S., where it currently counts seven employees in its Pittsburgh HQ, Green said that the company plans to invest in R&D efforts for the oncoming autonomous ride-hailing revolution and also has at least one eye on markets elsewhere.

“After expanding our driver network in the U.S, we plan to launch into international markets,” Green added.