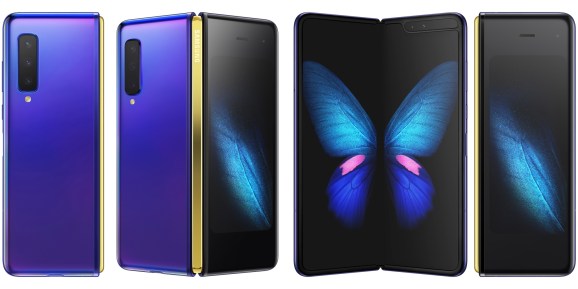 It’s been almost two months since Samsung announced the Galaxy Fold. The $1,980 foldable phone starts shipping on April 26. Samsung should absolutely delay it. Update on April 22: Samsung is delaying the Galaxy Fold.

Unless you’ve been living under a rock, you’ve certainly heard that some Samsung Galaxy Fold review units have been failing. After a day or two of use, some reviewers were left with flickering screens or broken displays, including CNBC’s Steve Kovach, Bloomberg’s Mark Gurman, The Verge’s Dieter Bohn, and Marques Brownlee (aka MKBHD). Other reviewers have not experienced problems with the screen.

A limited number of early Galaxy Fold samples were provided to media for review. We have received a few reports regarding the main display on the samples provided. We will thoroughly inspect these units in person to determine the cause of the matter.

Separately, a few reviewers reported having removed the top layer of the display causing damage to the screen. The main display on the Galaxy Fold features a top protective layer, which is part of the display structure designed to protect the screen from unintended scratches. Removing the protective layer or adding adhesives to the main display may cause damage. We will ensure this information is clearly delivered to our customers.

As far as PR statements go, this one is decent. Unfortunately for Samsung, this isn’t a case where messaging will fix the underlying problems.

The first part of the statement is standard: Using words like “limited,” “early,” and “few” — followed by saying the company will investigate the problem — is common when downplaying issues in consumer devices. But Samsung has only given itself a week to figure out the problem, and by then preorders will have already shipped.

Kudos to Samsung for making sure to break out the second part of the statement. While some reviewers did remove the protective layer before their screen broke, others did not. So Samsung needs to figure out why some screens are breaking on the Galaxy Fold regardless of the protective layer.

Great products are designed to be fail-proof. That’s true for hardware and software. You want to give your customers as few instructions and warnings as possible. Anytime you have to tell them they’re doing something wrong is a failure on your part, not theirs.

A screen that breaks in a day or two is enough reason for Samsung to push back the Galaxy Fold launch. And yet, I don’t think the company should cancel it.

As Evan Blass put it, the Samsung Galaxy Fold isn’t for you. This is a proof-of-concept device for early adopters.

If Samsung does not delay the Galaxy Fold, however, even enthusiasts won’t bother with it. The Galaxy Fold’s issues will continue dominating the conversation. Already that’s the main focus of the reviews. The narrative will never shift to the pros and cons of foldable screens, what this form factor means for the future of smartphones, and what the second-generation needs to address.

That will simply result in Samsung being forced to cancel the Galaxy Fold. If the company doesn’t act now, it may very well be too late. Delaying the launch is the only rational choice.