As Apple’s Siri, Amazon’s Alexa, Google Assistant, and Microsoft’s Cortana see usage climbing around the world, it’s hardly surprising that some folks are expressing misgivings about the always-on voice assistants in their homes. A report commissioned by Microsoft found that 41% of those surveyed had trust concerns, while a third said they’d prefer to use assistants that don’t tap their personal information or data. These are not baseless fears — Bloomberg earlier this month reported that Amazon contractors listen to and annotate sample audio from Alexa-powered devices, and Google patents detail audio systems that could recognize when a kid is engaging in “mischief.”

It’s in this climate of wariness that Chatterbox, a startup headquartered in Campbell, California, is launching a build-it-yourself smart speaker for kids on Kickstarter. The company’s plan to convince skeptical parents? Instead of leveraging Amazon or Google’s platforms for voice recognition, it’s smartly using Mycroft, an independently developed and open source assistant focused on privacy.

“We’ve … [honed in] on privacy, safety, and accessibility because our mission is to provide the healthiest and safest alternative computing platform for children,” Chatterbox CEO and former Tynker and Piper employee Kevin Elgan told VentureBeat via email. 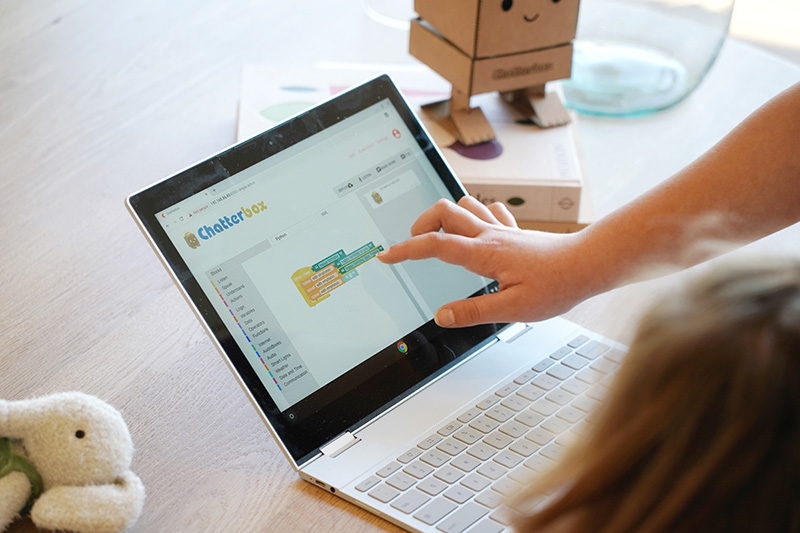 Above: Building voice apps for the Chatterbox.

To that end, Chatterbox’s eponymous speaker — with an enclosure constructed from recyclable cardboard — packs a Raspberry Pi, a custom-designed expansion board for a microphone and speaker, and a physical button that triggers all voice functionality. It only listens for commands when the button is pressed, unlike Google Home, Amazon’s Echo, and most other AI-imbued speakers. Moreover, Elgan says it is fully compliant with the Children’s Online Privacy Protection Rule (COPPA), the U.S. Federal Trade Commission regulations governing online services directed at children under 13 years of age.

Hardware Kickstarter projects are notoriously risky, but Elgan claims Chatterbox has already been tested for more than a year by kids and teachers in “top” Silicon Valley schools. And it isn’t exactly a fly-by-night operation — Elgan says the engineering and software team built products that are today used by over 60 million people and 80 thousand schools.

It’s worth noting that while Chatterbox is unique in the demographic it’s targeting, it isn’t the first crowdfunded product designed to give users greater control over assistants’ data-gathering activities. Project Alias, a 3D-printed housing that attaches to the top of a Google Home or Echo, features a Raspberry Pi-powered microphone and dual-speaker combo that produces white noise, preventing the speaker it’s attached to from activating. 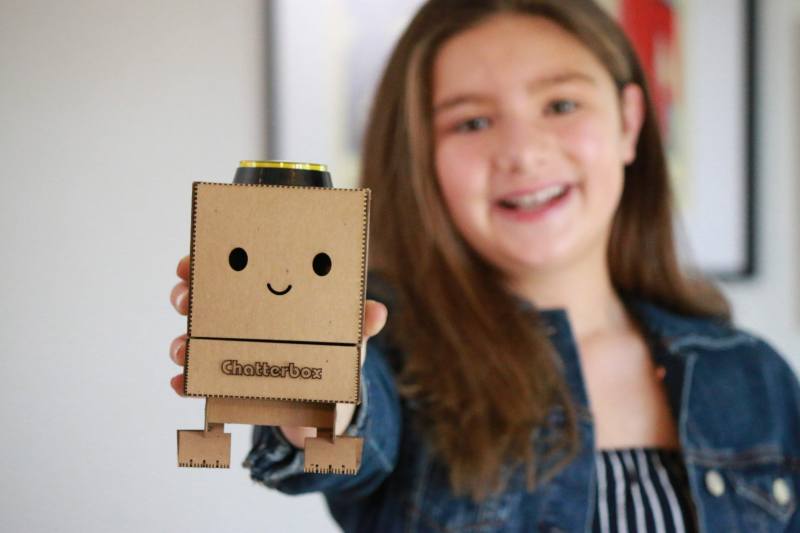 Elgan thinks Chatterbox’s differentiator is its commitment to education. Kids can easily disassemble the Chatterbox to expose its electronic innards or experiment with its software development tools to create and use their own “AI.”

“The computer interface of the future is voice-driven artificial intelligence. Chatterbox’s mission is to prepare kids for a future where a human-like AI is ubiquitous,” Elgan said. “By building the hardware and teaching Chatterbox, kids learn how and why assistant technology works, rather than being tricked by black-box technology into thinking voice AI is human, or some kind of authority.”

Ubiquity is a safe bet. The global smart speaker market could top 200 million units by the end of this year, according to analysts at Canalys, and those numbers jibe with reports from Voicebot.ai and Voicify. In a survey published in March, the firms found that the number of smart speaker owners reached 66.4 million in the U.S. and 133 million globally in 2019, representing year-over-year growth of 39.8%.

The tech’s omnipotence seems another solid bet. An MIT study investigating the ways kids interact with conversational assistants found that children generally consider them to be “friendly” and “trustworthy.” Some developmental psychologists, like Kaveri Subrahmanyam, chair of child and family studies, believe this perception of “friendliness” could encourage kids to offload tasks to AI rather than complete the tasks themselves.

“I truly believe Chatterbox is a revolution in technology education because it helps solve many of the problems that technology currently creates for kids,” Elgan said. “By crafting conversations, kids learn how to communicate clearly with people, [and by teaching] Chatterbox, smart speakers are demystified so kids understand them.”

Chatterbox is available on Kickstarter starting April 30 and will ship to consumers in schools in December 2019, with a suggested retail price of $179.