The digital entertainment revolution often feels like a clash of the titans. But somewhere between Disney and Netflix sits independent French animation studio TAT Productions, which so far has successfully navigated the upheaval and found international success.

Yet even as the small studio releases its second feature film and prepares an ambitious production slate, it’s still grappling with two forces squeezing from either side.

Giant studios are pumping out growing numbers of animated films. At the same time, streaming platforms are eating away at cinemas even as they offer the tantalizing opportunity to instantly reach millions of viewers.

As such, TAT’s dreams of remaining an independent force in control of its destiny and art are under increasing pressure.

“We are independent and we like it,” says TAT cofounder Eric Tosti. “This is great because we control what we do next. But at the same time, it’s possible in maybe two or three years there will be no more room in movie theaters for the movies that we make because there is only a place for one of the big machines like The Avengers.”

Despite some looming clouds, a sense of optimism was evident when I recently visited the headquarters of TAT Productions in Toulouse, France, as the company celebrated the release of its second feature film: Terra Willy: Planète Inconnue (Planet Unknown). The film was released on a Wednesday, and I came on a Friday, just as the critical first weekend lay ahead. 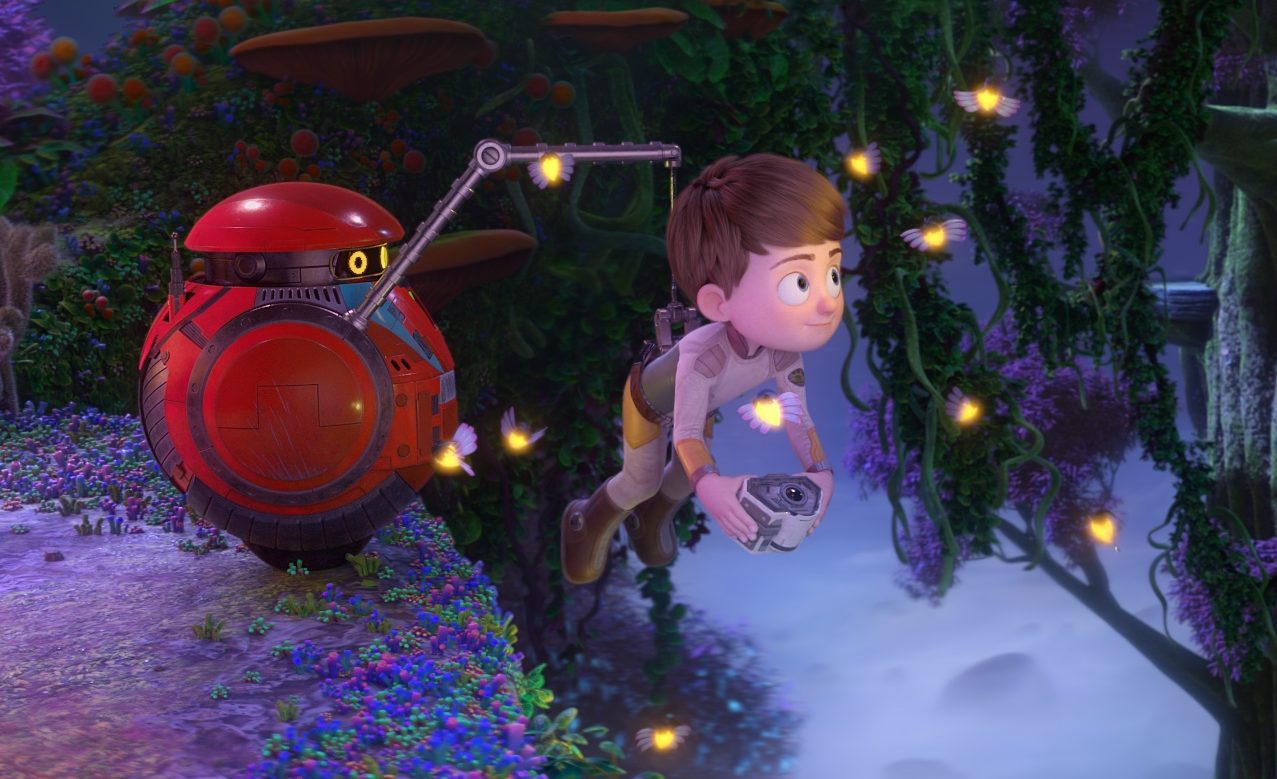 The headquarters are located in a nondescript brick building just outside the city center. Inside, however, the offices have the look and feel of a tech startup. Employees, numbering about 70 now, were hunched over computers in several different rooms, each dedicated to various projects. At the far end was a sound mixing room. 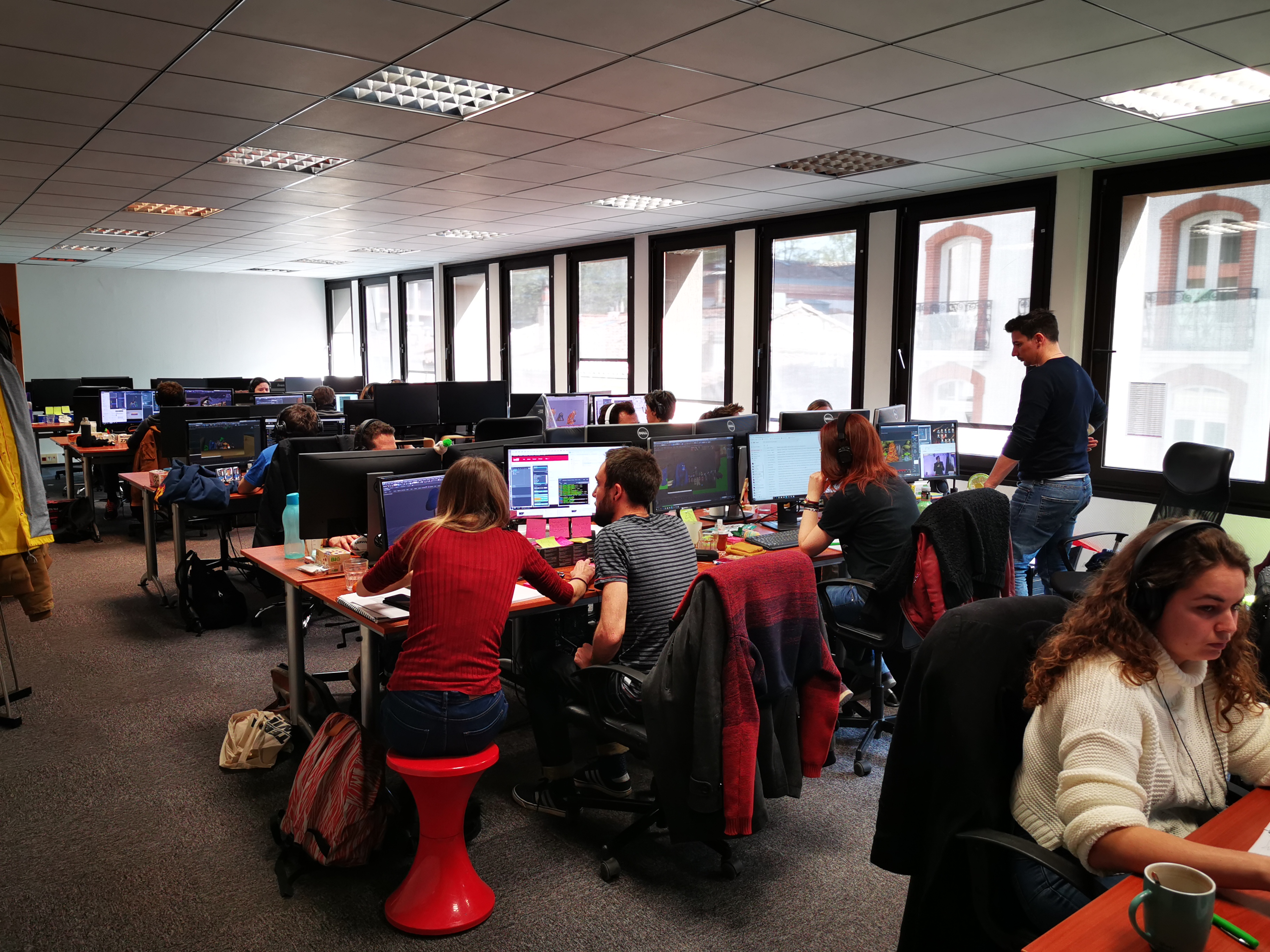 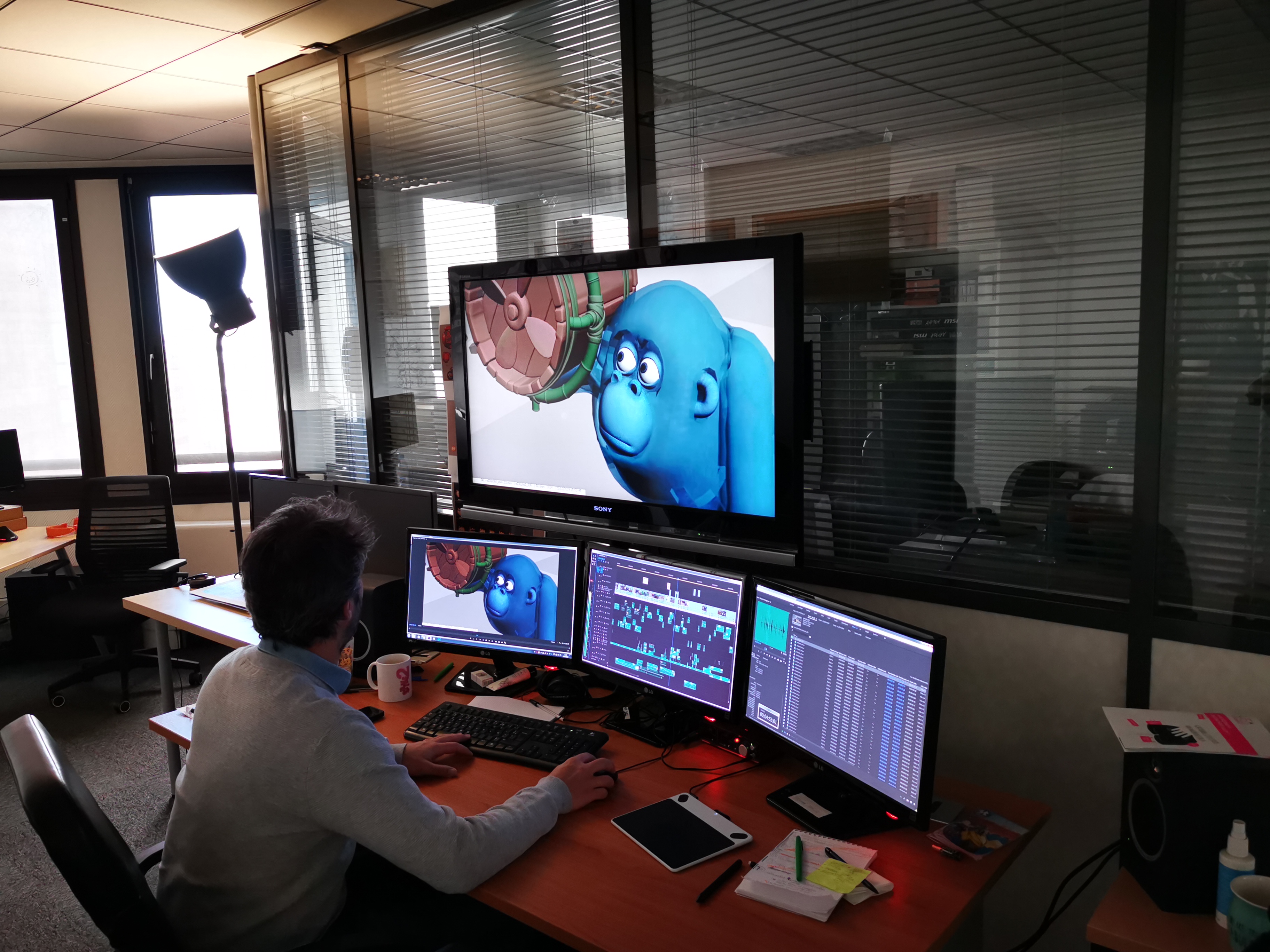 Tosti greets me and we walk past posters of characters of different TAT productions before settling into his office for an interview.

His own office has a collection of posters and figurines that suggest a student well-versed in anglophone pop culture: Spider-Man, the Stay Puft Marshmallow Man, Chuck Norris, Dobby of Harry Potter, E.T., and Buzz Lightyear. The last, of course, is one of the most famous confections of Pixar, the studio whose family-friendly blend of comedy with strong stories and a heart TAT seeks to emulate.

Such is the tone of Terra Willy, a science fiction tale that tells the story of a young boy who is separated from his family during a voyage through space. His parents place him in a rescue capsule that lands on an unexplored planet. Willy has only a survival robot named Buck to help him until he’s rescued. Adventure, comedy, and self-discovery ensue.

The film already has distribution deals in 70 countries (though not yet in the U.S.), evidence that this little studio has become a global player despite being located in the southwest corner of France, far from the Paris capital. Those markets include China, Russia, South Korea, the United Kingdom, Spain, Canada, Germany, Austria, Scandinavia, Poland, Israel, and Italy.

Once upon a time

While no one will mistake TAT for Pixar, its ambitions have grown well beyond its modest founding in 2000. Back then, Tosti joined with his brother, Jean-François, and their childhood friend David Alaux to make stop-action animated shorts. In 2009, the group decided to shift toward digital production.

They made their mark with an animated TV showed called Spike and another called Les As de la Jungle, or The Jungle Bunch as it was known in English-speaking countries. After a couple of seasons, Jungle was turned into the studio’s first feature film in 2016.

The movie sold 700,000 in tickets in France and was the 4th best-selling French film abroad for 2017. It eventually sold into 70 markets (though, again, not the U.S.). That established strong relations that made distribution deals for Terra Willy much easier to close.

“It’s ridiculous compared to Disney or Pixar,” Tosti says. “But at our scale it was huge for a movie … It also showed that from France, and even from Toulouse, we could make films that are sold around the world.”

That raised TAT’s profile considerably as it pushed ahead with production of Terra Willy. This would represent another challenge: a set of original characters who didn’t have a built-in fan base.

Terra‘s ultimate success or failure remains in play. For one thing, the French government still supports filmmaking through a generous financing program. So the risk factor is lower for a studio like TAT. And the opening weekend came just as the country was at the start of a two-week spring break, which could offer time for more family viewings.

And in terms of support, the film is already sold to distributors in 70 countries, ensuring that TAT will come out ahead in the end. And it expects that number to climb.

Still, those critical first-weekend box office figures highlight one of the big differences between creating for TV and cinemas.

“It’s super violent when the film comes out, because either it works right away or it does not work,” Tosti says. “With a TV series, if it does not work for a month, it is not necessarily very serious.”

While it’s always hard to pinpoint the reasons a film succeeds or doesn’t, a look at the top films in France that first weekend reveal the kind of market such an independent studio faces. Disney’s live-action Dumbo was the top film in France during its second weekend, while Captain Marvel was number 6. Terra Willy was one of 10 new releases that week, facing off against such major studio releases as Shazam.

But another part of the issue is that large number of French releases. For its size, the country produces a huge number of films thanks to that state support system which helps underwrite productions. Each weekend, cinemas have new releases that star big French names that virtually no one goes to see and then disappear. That has ignited a debate over whether it’s too many films, and whether some of those stars are overpaid by public money.

Willy went up against three new French comedies the weekend it was released.

“In France we are one of the only European countries that continues to produce so many films because there is a financing system with a lot of support for the film industry,” Tosti says. Of course, TAT also receives money from that system, which has helped maintain creative independence without having to worry that a bad box office weekend could sink it.

Still, there is yet another, perhaps larger issue. Willy had the even worse luck of facing another new animated feature in its first weekend: Wonder Park (Le Parc des Merveilles). And it’s this film that starts to really highlight the challenges ahead for TAT.

Wonder Park was made by Ilion, a studio based in Madrid, Spain. Having watched the growth of animation by other Hollywood studios, Paramount decided it wanted in. The film giant created Paramount Animation, and then signed a partnership with Ilion to produce films under that label. Wonder Park is the first product of that partnership. That first weekend in France, it was the third highest grossing film with $2,587,417, helped by Paramount’s publicity machine.

That continues a bit of a trend here in Europe. Back in 2011, NBCUniversal’s Illumination animation division acquired Paris-based animation and visual effects studio Mac Guff, which created the Despicable Me franchise and the Dr. Seuss’ The Lorax film. There has been an explosion in animated releases, which are attractive to global audiences.

“Before there was Disney and that was it,” Tosti says. “Now there is Universal. And there is Sony (Hotel Transylvania and Spider-Man: Into the Spider-Verse). All the studios will be doing cartoons so there will be more and more cartoons from studios and less and less space for independent cartoon. So it will be more and more difficult to exist when studio animated films multiply like rabbits.”

Tosti says TAT very much would like to remain independent. But he has gotten calls from unnamed people wanting to discuss a wide range of potential partnerships, or perhaps even something more.

Meanwhile, the company is already hard at work on another season of the Jungle TV show; its next feature film, The Adventures of Pil, which is targeted for 2021; and Argonauts, an adventure comedy for 2022. Its past track record, range of partners, and the state financing system have it on firm footing for now. Tosti says the goal is release a film every year, which means continuing to expand, hire, and move faster.

But as those projects advance, another decision looming is the company’s approach to distribution. Until now, it hasn’t signed any deals with streaming platforms. There were some talks with Netflix that did not result in a deal, Tosti says. But in part, that’s because TAT is still very attached to the notion of seeing its films as primarily a product for movie theaters.

“For the moment, we have decided to focus on movie theaters,” Tosti says. “It’s still one of the things that excites us, to say that there are people who will pay in their place to see the film in ideal conditions in a cinema with the atmosphere of a cinema. That remains something incomparable.” 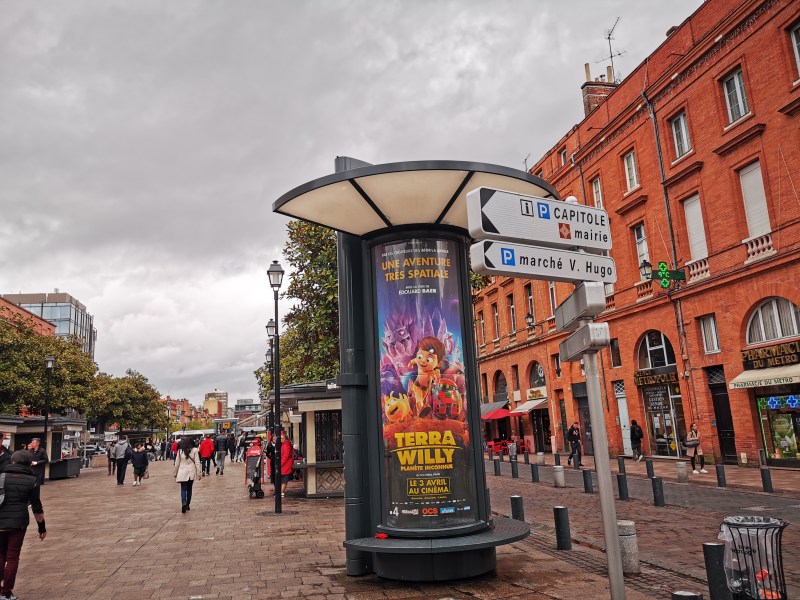 France’s creative community continues to struggled with its relationship to Netflix. Many of France’s major TV stations have decided to remove their content from Netflix to create their own streaming service, Salto. At the same time, Netflix must ensure that at least 30% of its content in European Union countries is of local origin.

In the end, streaming platforms and TAT may need each other. And if the cinema squeeze continues, it’s hard not to be tempted by the reach of streaming services, Tosti says.

“What if nobody sees the film, whereas if I go to Netflix, I reach millions, maybe even billions of people?” he says. “So maybe, yes, salvation will come from Netflix or from Amazon or Apple. Because if in a few years, if there is no more room for us because we are too small, there may be a way to flourish elsewhere. We must try to be vigilant.”