Anki, the San Francisco startup behind AI-imbued robotics toys like Overdrive, Cozmo, and Vector, today shuttered its doors after raising close to $200 million in venture capital from Index Ventures, Two Sigma Ventures, J.P. Morgan, Andreessen Horowitz, and other investors. According to Recode, it’ll lay off its entire workforce of just over 200 employees, each of whom will receive a week of severance.

A failed round of financing was reportedly to blame. CEO Boris Sofman told employees last week that a deal failed to materialize “at the last minute,” as did acquisition interest from companies such as Microsoft, Amazon, and Comcast.

Anki claimed to have sold 6.5 million devices total, and 1.5 million robots last August alone. (Cozmo was the top-selling toy on Amazon in 2017 with a community of more than 15,000 developers.) And in fall 2018, the company revealed that revenue was close to $100 million in 2017, a figure it expected to beat the subsequent year.

“Despite our past successes, we pursued every financial avenue to fund our future product development and expand on our platforms,” a company spokesperson told Recode. “[We were left] without significant funding to support a hardware and software business and bridge to our long-term product roadmap … We’re doing our best to take care of every single employee and their families, and our management team continues to explore all options available.”

Anki, which was founded by Mark Palatucci, Sofman, and Hanns Tappeiner in 2010 with the mission of “bring[ing] artificial intelligence and robotics into [users’] daily lives,” made a splash six years ago with its smartphone-controlled car set Anki Drive (alternatively Anki Overdrive), which was demonstrated onstage at Apple’s 2013 WorldWide Developer Conference. Anki later became an Apple retail partner and introduced several Overdrive accessories, including a series with Hot Wheels branding.

Cozmo — a cute robot toy that made use of Anki’s company’s deep artificial intelligence research and team of Pixar and Dreamworks animators — debuted in October 2016, ahead of Vector. But despite their novelty and sophistication, the robots shared relatively high launch price points ($180 for Cozmo and $249 for Vector), which likely contributed to their slow uptake in the notoriously unforgiving consumer robotics space. 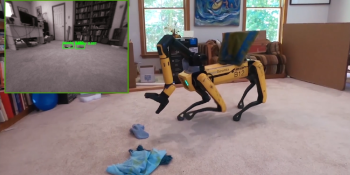