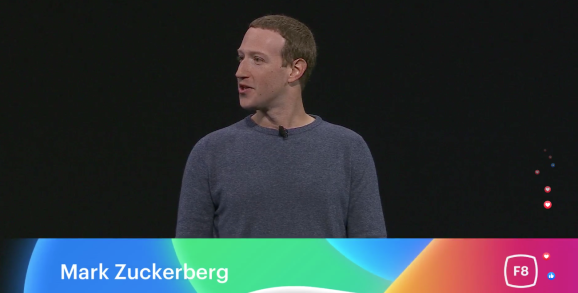 “I know that we don’t exactly have the strongest reputation on privacy right now, to put it lightly,” said Mark Zuckerberg from the F8 2019 stage. He was attempting levity, but the joke didn’t land, because it was true but not funny. However, the new and improved Facebook — the company and the site and the associated apps under the Facebook umbrella — are now all about privacy. Zuckerberg swears.

The opening few minutes from Zuckerberg’s keynote on the F8 stage were essentially a rehash of his March blog post in which he espoused his “privacy-focused vision for social networking.” The new Big Idea is that whereas in the past we consumers have thrived on a digital town square, increasingly we crave a digital living room. And that new, smaller, more intimate, more privacy-focused space is driven more by messaging than by Facebook Pages or the News Feed.

In the blog post, and from the F8 stage, Zuckerberg listed six core principles around which the company will build this new privacy-focused social network. They are:

They all sound great. End-to-end message encryption is a must have, to protect data from even Facebook’s prying eyes; the temporary nature of messages gives people more confidence that encrypted transmissions can’t be hacked later on; and so on. But much of this seems to merely describe what’s already present in WhatsApp.

Many of the early F8 announcements had to do with feature improvements to Facebook’s roster of messaging applications, like a completely rebuilt Facebook Messenger app that has a desktop app and the ability to watch the same video at the same time with a friend. There’s increased interoperability between Messenger and WhatsApp, too, with new features that will let you make calls and send messages seamlessly across them all. Messenger and Instagram are set to enjoy the same end-to-end encryption as WhatsApp.

The company is also now keener than ever on features like Groups, where Facebook users can gather into “meaningful communities.” Simply, Groups give people more private spaces within Facebook where they can engage more freely without worrying about trolls and the like. “Privacy” is sprinkled throughout Facebook’s other announcements, too, like how Portal lets you share and send private photos and video messages or a new Instagram feature that shows you who liked something, but not a numerical tally.

Where the winds are blowing

Despite the recent announcements, it’s not a stretch to posit that Facebook doesn’t care about privacy in the way consumers do, nor for the reasons that consumers want it. There’s virtually nothing in the company’s history that indicates anything but lip service to the issue, but there is a litany of missteps and bad moves that show the opposite.

It’s aggravating, but it shouldn’t be surprising. Facebook was arguably built specifically for not-privacy, with a business model that vacuumed and acted on data that users created all day, every day, across the globe.

What’s changed is how people are using Facebook and its associated services. According to Facebook, 1.5 billion people use WhatsApp, and late last year Zuckerberg stated in an earnings call that “On average, more than 2 billion people use at least one of our services every day.” That includes all of the company’s messaging apps. Anecdotally, teenagers seem to be using messaging apps with fervor while eschewing Facebook itself.

So then, this renewed focus on privacy, as Zuckerberg himself describes it, looks less like Facebook has developed a conscience about how it views privacy and data handling and more like the company is sagely seeing user trends, and adapting to them in order to continue running a successful business. That’s a cynical take, but looked at another way, it shows how powerful consumers can be. People are shifting away from the digital town square to the digital living room to have more private and intimate online relationships and communications, forcing Facebook to provide features that enhance those experiences. The net result appears to be more privacy features.

In that sense, now when Zuckerberg says, “We need both private and public spaces” and “Privacy gives us the freedom to be ourselves” and “The future is private,” we can perhaps take him at his word. For real this time.