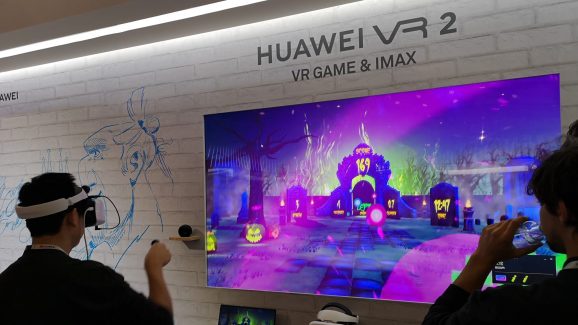 Though its 5G products are not entirely welcome in the United States, Huawei is reportedly pushing forward with a unique new product: the world’s first 5G television. As Nikkei reports this morning, the Chinese company plans to use the cellular-enabled TV and new PCs to challenge Samsung’s and Apple’s dominant positions in the global consumer electronics market.

While the TV specifications aren’t comprehensive, two details are eye-catching: a 5G modem and an 8K display resolution. Nikkei suggests that the television will be able to download high-resolution programming over cellular connections, including 360 degree videos and virtual reality programs, though it’s not clear how a conventional flat television would make the most of such content. But apparently the TV might also act as a 5G router for other wireless devices, serving VR content to VR glasses and high-definition videos to phones or tablets.

As of today, 8K broadcasts are all but entirely unavailable across the world, and 8K televisions are at best rare. Samsung has recently started to sell a $5,000 8K TV, and other Korean, Japanese, and Chinese TV makers are expected to follow in the lead-up to the 2020 Tokyo Olympics, which will be broadcast in 8K resolution — to a presumably limited audience of viewers — next year.

Fewer than 20,000 8K sets were sold in 2018, but annual sales are projected to increase 100 times by the end of 2020. Sony has announced that its next-generation PlayStation will be 8K-capable, potentially providing another reason for millions of consumers to consider investing in beyond-ultra HD resolution displays. With over 33 million pixels — 4 times as many as on current 4K screens — 8K TVs will generally need to be very large — and supplied with gigantic data pipes — to make full use of their resolution advantages.

Nikkei also suggests that Huawei plans to be one of the world’s top five PC makers within the next three years and is mounting a more aggressive challenge to Apple’s leadership of the premium desktop and laptop computer markets. Unlike Apple, Huawei makes its own 5G chips, which it could conceivably integrate into computers — a step Apple has not taken with its Mac lineup. Apple’s iPhones and iPads are its only computers with cellular features, giving Huawei the opportunity to easily distinguish its premium next-generation laptops from those of rivals.