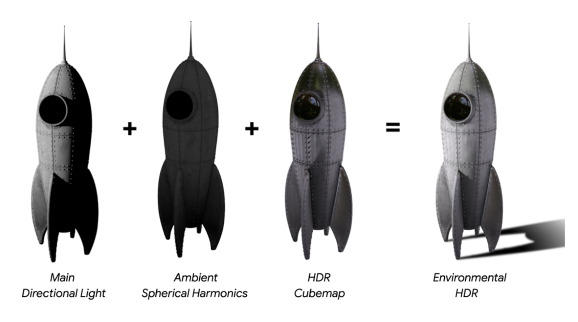 ARCore has been used to create thousands of apps to date and now supports an estimated 400 million devices (up from about 250 million devices in December), Google says. And this week, it’ll gain improvements on the rendering, design, and interactivity fronts.

First up: The Augmented Images API, which lets users point their cameras at 2D images (like posters or packaging) and bring them to life, can now simultaneously track moving images and multiple images. “This unlocks the ability to create dynamic and interactive experiences, like animated playing cards where multiple images move at the same time,” wrote Google director of engineering Anuj Gosalia in a blog post.

The Light Estimation API, which provides a single ambient light intensity to mimic real-world lighting in digital scenes, has also been upgraded. A new mode — Environmental HDR — taps machine learning with a single camera frame to “understand high dynamic range illumination” in 360-degrees, taking in available light data and extending the light into a scene, with accurate shadows, highlights, reflections, and more. “When Environmental HDR is activated, digital objects are lit just like physical objects, so the two blend seamlessly, even when light sources are moving,” said Gosalia.

Above: Before and after Environmental HDR is applied to the digital mannequin on the left.

Last, but not least, Google today debuted Scene Viewer, an AR experience that can be launched from the web instead of an app. It’s the framework that powers Google Search on mobile’s AR viewer.

Google says Scene Viewer and the other enhancements will roll out over the next two ARCore releases.