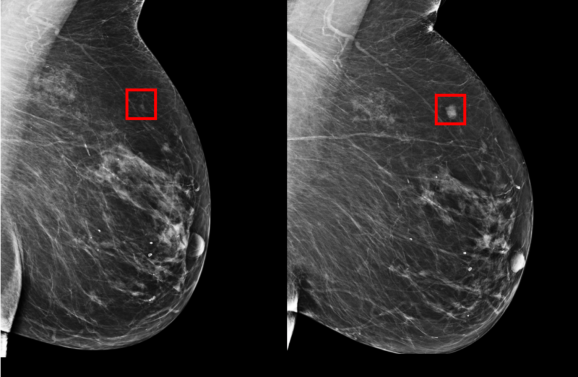 Breast cancer is the second leading cancer-related cause of death among women in the U.S. It’s estimated that in 2015, 232,000 women were diagnosed with the disease and approximately 40,000 died from it. And while exams like mammography have come into wide practice — in 2014, over 39 million breast cancer screenings were performed in the U.S. alone — they’re not always reliable. About 10% to 15% of women who undergo a mammogram are asked to return following an inconclusive analysis.

Fortunately, with the help of AI, scientists at MIT’s Computer Science and Artificial Intelligence Laboratory (CSAIL) and Massachusetts General Hospital are making steps toward more consistent and reliable screening procedures. In a newly published paper in the journal Radiology, they describe a machine learning model that can predict from a mammogram if a patient is likely to develop breast cancer as many as five years in the future.

Their work builds on that of Google AI, which in October said it had developed a model that could detect metastatic breast cancer with 99% accuracy, and Alphabet’s DeepMind, which last year validated an AI system with the University College London exhibiting “near-human performance” on CT scans. Separately, scientists at New York University recently made available a breast cancer screening model trained on over 200,000 mammography exams, and a team at Harvard Medical School devised AI that can detect a genetic defect responsible for some cancers.

“Rather than taking a one-size-fits-all approach, we can personalize screening around a woman’s risk of developing cancer,” said Regina Barzilay, a senior author of a new paper who’s herself a breast cancer survivor. “For example, a doctor might recommend that one group of women get a mammogram every other year, while another higher-risk group might get supplemental MRI screening.”

As Harvard professor and paper coauthor Constance Lehman explained, most breast-cancer risk models focus on a range of risk factors such as age, family history of breast and ovarian cancer, hormonal and reproductive factors, and breast density. But some of these factors are less correlated with breast cancer than others, harming the models’ accuracy.

Barzilay and colleagues eschewed manual pattern and risk identification in favor of an autonomous system trained on over 90,000 mammograms and known outcomes from over 60,000 Massachusetts General Hospital patients. From these samples, the AI system “learned” relationships among the data that even highly skilled radiologists and oncology might miss.

“Since the 1960s radiologists have noticed that women have unique and widely variable patterns of breast tissue visible on the mammogram,” said Lehman. “These patterns can represent the influence of genetics, hormones, pregnancy, lactation, diet, weight loss and weight gain. We can now leverage this detailed information to be more precise in our risk assessment at the individual level.”

The team also took pains to ensure the risk assessment model was just as accurate for racial minorities as for Caucasian patients, which isn’t always the case with early models. They say it’s equally accurate for white and black women, and in experiments, they say the model managed to accurately predict 31% of all cancer patients in the highest-risk category compared with only 18% for traditional models.

Barzilay says it could lay the foundation for mammogram screenings that identify patients who are at a greater risk for other health problems, such as cardiovascular disease or other cancers. “Our goal is to make these advancements a part of the standard of care,” says coauthor Adam Yala, doctoral student at MIT CSAIL. “By predicting who will develop cancer in the future, we can hopefully save lives and catch cancer before symptoms ever arise.”

The researchers leave to future work applying to model to other diseases.