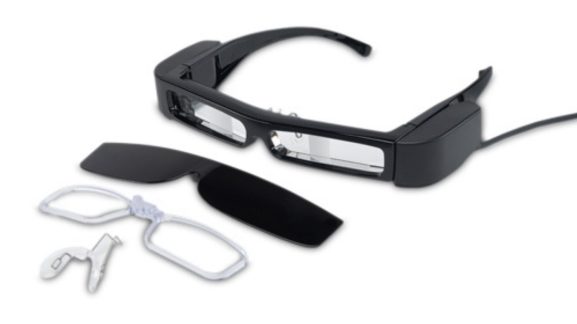 Mainstream success has eluded augmented reality glasses for years, but tech companies keep advancing the underlying technologies with the expectation that they’ll eventually take off. Epson’s newly announced Moverio BT-30C is a prime example of this strategy. Based upon Qualcomm’s new XR Viewer platform, the $499 headset connects to Android phones and Windows PCs via USB-C, offering instant access to videos and apps at the dawn of the 5G era.

Somewhat resembling a pair of reading glasses, Moverio BT-30C uses OLED displays with an oddly unspecified but “high” resolution to place what appears to be a small, bright window within the wearer’s field of view — largely transparent by default, so the world remains visible around it. Easily attachable magnetic dark shades are included for users who want to block out their surroundings for video playback.

From an AR perspective, the BT-30C’s capabilities appear to be fairly simple. Used without custom software, it acts like an external display. But app developers can use a Moverio SDK to obtain headset orientation data to synchronize display content with head movement, as well as accessing a side-by-side 3D display mode. Android users can download a free Moverio Link app to adjust brightness and switch between 2D and 3D modes, amongst other settings.

Common AR features such as headphones or cameras appear to be missing in action, making the headset useful largely as a viewing device — a way to comfortably monitor a video feed from a drone or to “augment” a live walk through an art gallery, with pop-up information based on your current location. An in-line controller allows you to attach and adjust the volume of self-supplied 3.5mm headphones; alternately, you can pair your favorite Bluetooth headphones with your device.

Convenience and pricing are the latest Moverio’s key features. BT-30C is less expensive than the company’s earlier models, which have been on sale for eight years, and despite utilizing a very similar form factor, it doesn’t require a breakout box or special software. USB-C enables it to be completely plug-and-play, and at just over a fifth of a pound — more than a pound lighter than a fully standalone AR headset like Microsoft’s HoloLens — and one-sixth or one-seventh the price. It’s also an opportunity to leverage upcoming 5G networks to display content on something other than a smartphone screen.