Chances are you haven’t spent much time thinking about diabetic foot ulcers, but they’re shockingly common in the U.S. Over a million occur annually among the 30.3 million Americans with diabetes, and they recur in as many as 40% of patients within a year of diagnosis. If left untreated, they can lead to chronic pain and debilitating injuries, and in the severest of cases non-traumatic limb amputations.

That’s why Dr. Jonathon Bloom teamed up with MIT graduates David Linders and Brian Peterson eight years ago to found Podimetrics, a care management company developing diagnostic solutions for diabetic foot ulcers. The Somerville, Massachusetts-based company today announced that it has closed a $13.4 million series B funding round, with contributions from Rock Health, Norwich Ventures, and Scientific Health Development, bringing its total raised to over $20 million.

Bloom, who serves as CEO, said the fresh capital will be used to accelerate Podimetrics’ presence within the Veterans Affairs (VA) health care system and commercial payers nationwide. 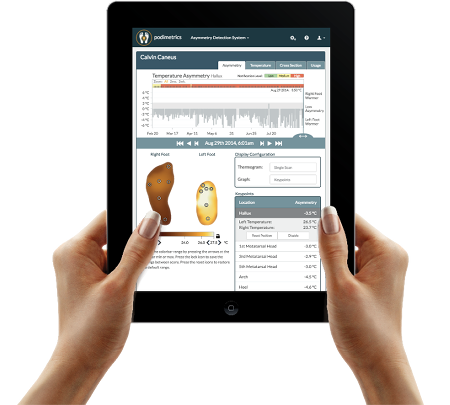 “Diabetic foot ulcers are one of the most devastating and costliest diabetes-related complications. In fact, data suggests that today as many as one out of every three dollars spent on diabetes is linked to lower extremity complications,” said Bloom. “At Podimetrics, we are working diligently to prevent [foot ulcers] … As the son of a veteran, it is gratifying to know this funding will accelerate our efforts to bring this solution to more patients, especially in the VA system.”

Patients step on the matt for 20 seconds a day, and the metrics it collects are beamed to Podimetrics’ cloud for processing by algorithms that consider both temporal changes and incongruities between the left and right foot. The company’s care team then triages anomalies and abnormalities, and patients receive personalized, preventative treatments under the direction of their doctor.

Podimetrics claims its technology can detect ulcers that might normally take five weeks to present clinically, and it says one of its largest customers is the VA, where an estimated one in four veterans has foot ulcers. In a ringing endorsement of Podimetrics’ technology, the agency recently released a guidance document recommending the SmartMat for high-risk patients.

“We continue to be impressed by the clinical outcomes delivered by the Podimetrics platform, which has been achieved by integrating proprietary remote-monitoring technology with a proactive care management program,” said Rock Health Venture’s Jeff Trost. “We are excited to support Podimetrics as they scale and bring this clinically-validated solution to the millions of patients who can live healthier lives free of [foot ulcers].”