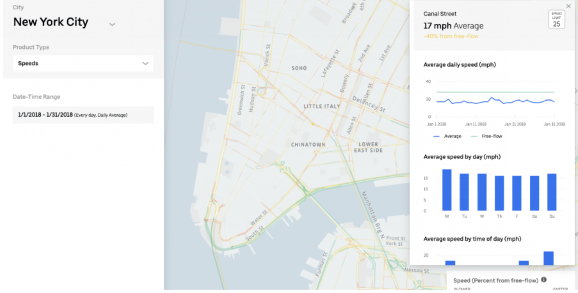 “The key to solving this nation’s immense transportation challenge is cooperation, and Uber has been a champion partner for OKI,” said Mark Policinski, CEO of the Ohio-Kentucky-Indiana Regional Council of Governments (OKI), a pilot Movement Speeds user.

As Uber explains, speed info is particularly handy in analyzing congestion and street networks and in prioritizing the implementation of “traffic-calming” measures like speed bumps and raised intersections. But when combined with data from other sources — like SharedStreets, a nonprofit referencing system of mapped collisions, curb inventories, and more — it becomes much more powerful. A metro might use a cyclist-pedestrian data set to identify corridors where high-speed bike accidents occur, for example, to justify investments in protected cyclist infrastructure.

“This can help planners better understand where cyclists are most at risk and prioritize and plan for more protected bike lanes,” wrote Uber product manager Jordan Gilbertson in a blog post. “SharedStreets references allow a city to bring this critical data into their workflow and work with it on their terms … [with it,] you’re able to combine them seamlessly with Uber Movement speeds, [and] the picture of the street comes into full focus.”

One Movement Speeds user — Dr. Jane MacFarlane, executive director of the University of California Berkeley’s Institute of Transportation Studies — is already leveraging the tool to validate urban simulation modeling. “With Uber travel time and speed data, we’ve had the invaluable opportunity to capture the real-world dynamics, which informs our computational models and validates our findings,” she said. “Our long-term vision is to provide next-generation transportation planning and control capabilities for optimizing the movement of goods and people and improving the quality of life in our cities.”

Uber’s Movement, for the uninitiated, is the work of a civic data tool development group known internally as Project Metropolis. It enables users to measure travel times in cities with trip data collected from Uber’s GPS check-in function and broken into segments to make it harder to identify individual rides. This is just one of many private-sector initiatives aimed at tackling urban design challenges.