More than a third of U.S. workers — about 57 million people — are part of the so-called gig workforce, according to a recent Gallup poll. In fact, it’s estimated that on-demand jobs add $715 billion to the economy annually and that the contractor market exceeded $3.7 trillion globally in 2017.

Business is booming for intermediaries who connect gig workers with employers, including a relatively new entrant, Instawork. The San Francisco-based Y Combinator alum, which targets the hospitality sector, has been quietly expanding in the Bay Area, Los Angeles, and San Diego for the better part of four years. Today, Instawork announced the closure of a new funding round it says will enable it to roll out in Phoenix, Las Vegas, and Chicago this year.

Instawork told VentureBeat that it secured $18 million in a funding round led by Spark Capital, GV (formerly Google Ventures), and Burst Capital, with participation from existing investors Benchmark, Y Combinator, Tuesday Capital, and SV Angel. This brings the startup’s total raised to nearly $30 million and will result in Spark Capital general partner Nabeel Hyatt joining its board of directors.

“The response to Instawork so far in San Francisco, Los Angeles, and San Diego has been very strong by both professionals and our partners,” said CEO and cofounder Sumir Meghani via email. “In fact, it has been so strong that we are using our new round of funding to quickly expand Instawork to more markets.”

Instawork posts shifts for chefs, event servers, housekeepers, and other positions its customers need to fill quickly (within hours if necessary), which vetted professionals book at their leisure. (Workers are required to submit their full names, a valid phone number, and an email address and home address, along with up-to-date work experience, references, and things like vehicle information and job preferences.) Jobs range in length from a few hours to weeks — workers see the estimated pay, location, and total duration before they commit — and hirers are encouraged to rate workers after the completion of each gig. 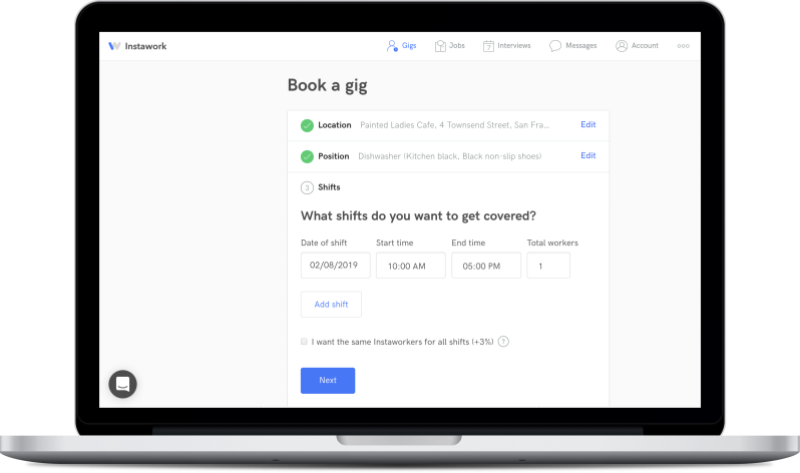 Above: Booking a gig through Instawork.

Instawork holds contractors accountable by suspending them if they cancel a job within 24 hours. It reserves the right to deactivate the accounts of workers who cancel under 24 hours more than once in the same 30-day period, and it suspends workers who consistently earn one- or two-star ratings or who show up late more than once. Those who don’t show up to work without canceling are permanently banned from the platform, excepting “properly documented” emergencies.

On the other hand, job seekers who consistently excel are awarded in-app badges that confer special benefits. After a 4-star or 5-star rating from an Instawork partner, hirees are added to that partner’s favorites list automatically. And if workers complete 10 gigs, invite two friends, and maintain an average rating of 4.5, they graduate to Gold status, which gives them access to merchandise, special events, exclusive gigs, monetary bonuses, and more.

Instawork provides up to $1 million in occupational accident and liability insurance for jobs, and it handles all 1099-related billing and payments processing. The company charges a booking fee of $10 per shift and says the thousands of professionals on its platform make $140 a shift on average.

By focusing on the hospitality niche, Instawork is hoping to carve out a position in a crowded field of on-demand gig platforms. Jitjatjo and Jyve similarly pair customers with workers from talent marketplaces, as does talent-finding app Pared. TaskRabbit, Porch, Thumbtack, NeedTo, Handy, Zaarly, Eden, and Managed by Q are just a few of the dozens of other services vying for clients.

Above: The Instawork mobile app for workers.

But investors like GV general partner Jessica Verrili think Instawork’s scale gives it a leg up over rivals. The company claims that after its expansion it will be one of the largest hospitality and service gig marketplace in the United States.

“We believe the future for the hospitality industry is having access to both full-time employees and gig workers,” said Verrili in a statement. “Instawork’s approach to building this gig marketplace is working incredibly well, and we are excited to support the team as it expands Instawork across the country.”

In addition to its headquarters in San Francisco, Instawork has offices in Bangalore, India.