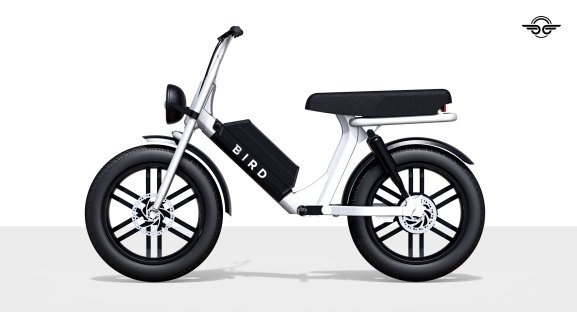 Bird, the Santa Monica, California-based mobility startup that in May unveiled Bird One, a $1,299 e-scooter architected with “industry-leading” battery life, today took the wraps off of another compact electric vehicle — albeit one with a slightly different form factor. Bird Cruiser, which is designed for sitting rather than standing and looks not unlike a miniature motorbike, features a padded seat that can accommodate up to two riders and an optional pedal-assist or peg.

It will roll out this summer in unnamed test markets via Bird’s first-party service and its platform partners.

The Cruiser, which Bird says was exclusively designed for ridesharing, has hydraulic disc brakes that “reliably” and quickly bring the vehicle to a stop. It’s also powered by a 52-volt battery and boasts a built-in LCD display that shows route progress and other key trip details.

Even the motor is a custom job, apparently. Bird says it was specially engineered to ensure that rides aren’t “disrupted” by hills or inclines. “Cruiser is an inclusive electric-powered option that is approachable, easy-to-ride, and comfortable on rough roads,” added VanderZanden.

The Cruiser’s unveiling comes months after the company announced a monthly rental program to complement its existing on-demand service. For $25, Bird customers in San Francisco and Barcelona get unlimited rides on a personal scooter, with additional cities to follow.