Amazon in January took the wraps off of Scout, an autonomous delivery drone that’s today ferrying goods to homes in Snohomish County, Washington, near Seattle’s King County. And this morning during a session at the company’s inaugural re:MARS conference in Las Vegas, Hao Chen, senior principal engineer of Scout, detailed a few of the simulation systems Amazon’s using to train the AI algorithms that underpin its navigation systems.

For the uninitiated, Scout is a watertight, six-wheeled, cooler-sized robot that was developed, built, assembled, and programmed in-house by Amazon engineers. It’s designed to be robust, with wheels that made of material firm enough to survive the rigors of daily sidewalk driving, and it packs cameras, ultrasonic sensors, and other sensors that enable it to detect and maneuver around obstacles in real time.

Scout typically sticks to the sidewalk, but if it’s blocked by something untraversable — a group of joggers or cones around a manhole, say — it’ll drive on the street instead. When it needs to cross the street, it’ll activate blinking lights to ensure cyclists and drivers spot it quickly. 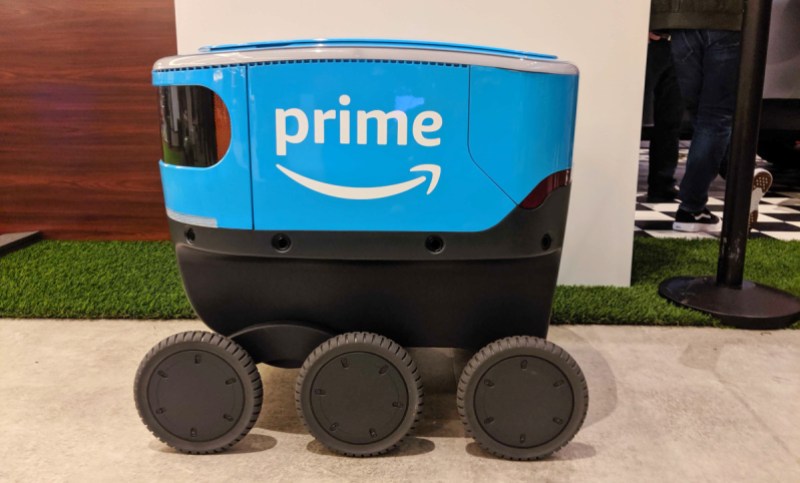 The Scout team is performing testing both in the real world and on a simulated sidewalk they built in the lab, but to train the machine learning models that guide Scout down suburban streets, they architected a pipeline that generates detailed virtual training environments mimicking every real-world neighborhood where Scout operates.

The Scout team collects petabytes of high-resolution imagery, scans from lidar sensors (which bounce light off of objects to measure their relative distances), and GPS location data (when available) and feeds them into a processing pipeline, employing photogrammetry along the way to recover exact positions from surface points. Next, they annotate curb, pothole, sewer drain, road, and driveway elements with color-coded labels, in part with the aid of computer vision tools that automatically identify things like the edges of sidewalks.

After successive stages of geometry, texture, and mesh optimization and rendering, all of which is performed in the cloud on Amazon Web Services (AWS) instances, the result is a 3D map accurate down to the sub-centimeter. It’s fully navigable — camera controls enable engineers to fly over homes or view lawns from street level — and has realistic physics driven by an engine that approximates real-world friction, pressure, and velocity.

“We’ve actually simulated [friction] on [packages to be delivered inside Scout], which gives unnaturally large pressures,” said Chen. “This is important, because if my physics are wrong, then my control dynamics are wrong, and then my power draw assumption is wrong and so on. This is the key takeaway.”

A corpus for an area roughly 1.17 square kilometers in size comprises over 21,000 photos and takes about 400 hours to model on a single computer, or roughly four hours on 50 AWS instances running in parallel. “We can recreate a real environment to almost any fidelity,” said Chen. “Think about the freedom this allows us to achieve.” 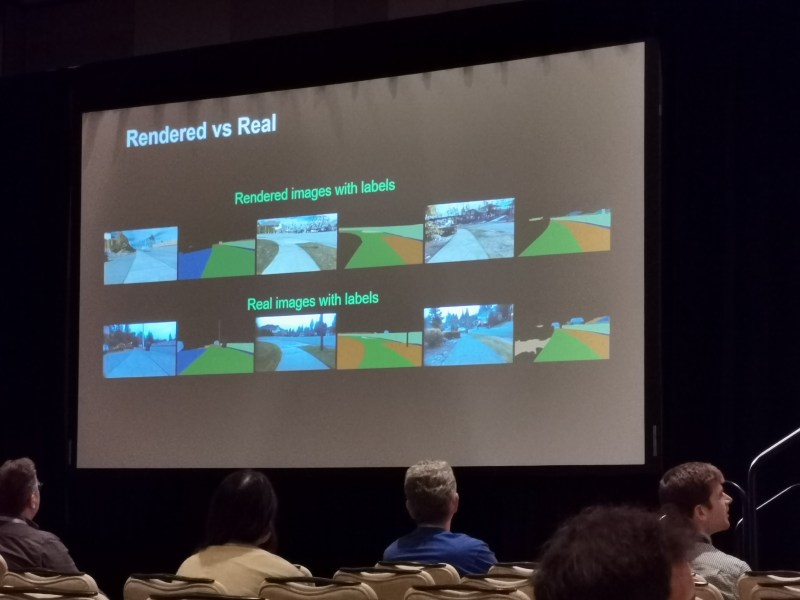 Above: Real-world environments compared to their AWS-generated digital counterparts.

All the more impressively, these environments can be streamed to virtually any device — including smartphones, laptops, and tablets — thanks to an extensible, bespoke software development kit. From the client side, the Scout team can orchestrate active learning approaches that fine-tune the navigational models through thousands of simulated deliveries.

Despite the robustness of the framework that Amazon’s developed and the volume of data that’s been collected to date, it’s worth noting that Scout isn’t quite ready for prime time. The company is piloting a small fleet of six Scouts currently, transporting them in a van to which they return after they’ve dropped off a customer’s package. They’re accompanied by assistants who retrieve boxes from the robot and put them on doorsteps.

It’s also worth noting that Amazon is far from the only company vying for a slice of the lucrative autonomous delivery market, which is filled with well-funded startups like Marble, Starship Technologies, Nuro, Robomart, Boxbot, Dispatch, and Robby, to name a few, not to mention FedEx and Postmates.

That’s all to say that it’ll likely be a while before Scout starts making deliveries nationwide (or even in more than a handful of cities), and when it does, it won’t be the only delivery drone on the block.