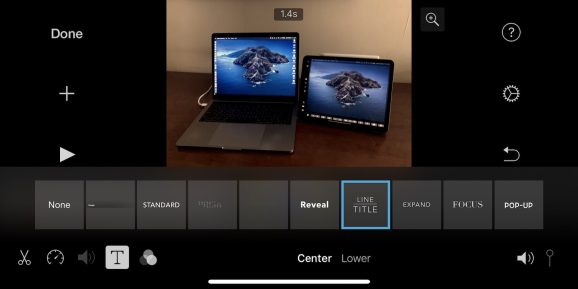 Apple’s consumer-level video editing application iMovie has continued to improve on iOS since its initial release in 2010, though major new feature additions have only been intermittent in recent years. Newly released version 2.2.7 is noteworthy, though, because it brings a valuable new feature — a green screen effect — to the app, along with 80 new soundtracks that can be used for videos or trailers.

The green screen effect enables iMovie for iOS to do something that previously required third-party apps: automatic detection and removal of either a blue or green background, enabling the remaining people or objects to be superimposed on another video clip or still background image. Apple includes a four-point mask and strength slider as adjustments for the effect.

It’s worth mentioning that Apple acquired real-time green screen developer Spektral last year, though the technology was expected to be used for augmented reality rather than video editing, since it works while shooting live video at up to 60 frames per second. Even so, the same or much less complex technology could be applied to pre-recorded videos being processed by iMovie.

Version 2.2.7’s 80 new soundtracks span genres ranging from “action” and “chill” to “playful,” “pop,” “retro,” and “sentimental,” with a separate section for holidays and events. As before, you can also choose music to match iMovie’s built-in themes, and access your own music library to use in the backgrounds of videos.

The new update also supports the addition of logos or custom graphics to videos using still images with transparent backgrounds, and overlaid photos for picture-in-picture and split-screen effects. PIP and split-screen borders can also be removed so that the overlaid images aren’t as obviously separated from the rest of the content, if you wish.

iMovie 2.2.7’s new features are available now as a free iOS App Store update for both iPhones and iPads, with no special differences besides standard screen layout variations between the two devices. It’s unclear whether these devices will continue to have feature parity after iOS and iPadOS split off this fall, as Apple may have special plans for iPad users, perhaps including even greater feature overlap with the same-named Mac app.