It’s estimated that tens of millions of people in the U.S. suffer from disabilities that impair mobility, such as cerebral palsy, muscular dystrophy, and spina bifida. In fact, every day about 15 people are diagnosed with amyotrophic lateral sclerosis (ALS), a progressive neurodegenerative disease that attacks cells in the brain and spinal cord.

Those with the severest cases require assistive tools to perform tasks like flipping on light switches or twisting doorknobs. Watching television poses an added challenge, because the tactile buttons on most remote controls weren’t designed with accessibility in mind. That’s why Comcast designed a feature — a web-based remote for tablets and PCs  — that enables users to navigate TV menus using only their eyes.

“Changing the channel on a TV is something most of us take for granted, but until now, it was a near-impossible task for millions of viewers,” said Comcast VP of accessibility Tom Wlodkowski. “When you make a product more inclusive, you create a better experience for everyone. And we’re hoping our new X1 feature makes a real difference in the lives of our customers.” 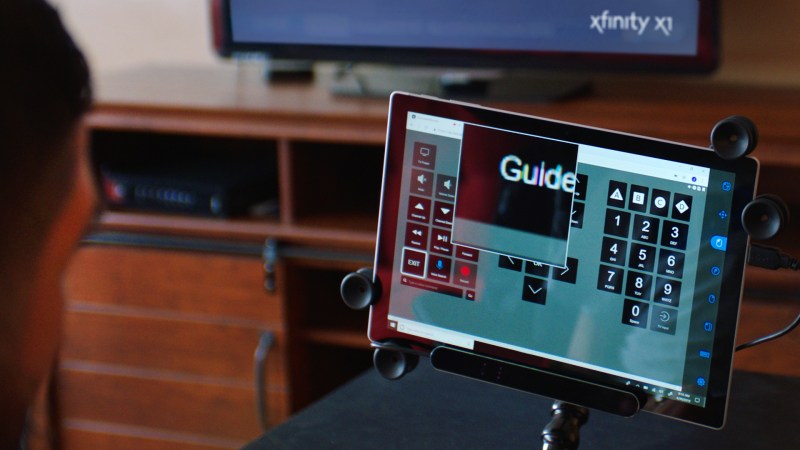 To that end, the new Xfinity X1 web remote pairs with existing eye gaze hardware and software, including Sip-and-Puff switches commonly used to send signals to devices with air pressure, and lets users perform tasks like changing the channel, setting a recording, searching for a show, and more. Customers log in through a web portal (xfin.tv/access) and use their credentials to pair the remote with their set-top box. From that point forward, direct gazes at buttons on the remote send the corresponding commands to the TV.

Here’s a sampling of features the remote supports:

“Comcast knows that TV and media access is a powerful part of life for most people,” said Assistive Technology Industry Association CEO David Dikter of today’s announcement. “That X1 can now be used with eye gaze and an array of other assistive technologies shows a new level of commitment to access and independence for persons with disabilities. A company that understands that users have their own specialized technology and works to bridge these technologies in a way that delivers value deserves applause.”