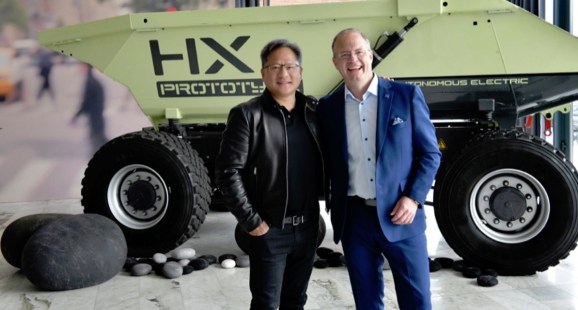 Speaking at Volvo Group’s Gothenburg, Sweden headquarters on a press call, Nvidia CEO Jensen Huang said the deal will help transform the multi-hundred-billion-dollar commercial truck industry and improve safety for construction workers. The companies did not share financial details of the announcement.

“For Nvidia, this is a gigantic announcement and a very important milestone because, as you know, we have been working on autonomous vehicles for some time,” Huang said.

Lars Stenqvist, Volvo Group chief technology officer, said on the call that his company has been using its own self-driving technology at a mine in Norway, but to take the experiment onto public roads, Volvo will need to use Nvidia’s artificial intelligence and self-driving car technology. (I wrote recently how Volvo is working with Varjo on augmented reality and virtual reality technologies to improve driver safety.)

Volvo Group is a $40 billion company with 100,000 employees and 12 brands for trucks, including Mack trucks. Stenqvist supervises 12,000 engineers, and they have been working on autonomous driving technology for some time. The companies will work in areas such as public transport, freight transport, garbage collection, construction, mining, forestry, and more.

“I’ve been in the industry for 25 years, and it has never been as exciting as now,” Stenqvist said. “It’s a big technology shift ongoing in the commercial vehicle industry that will radically change our business.”

Huang said that the utilization of trucks is very low today, and that’s bad for a capital-heavy industry. Artificial intelligence will help with that. Safety incidents are also one of the greatest costs and liabilities in the industry. With intelligent, connected cars, the industry will be able to add new services to the trucks.

They will test the systems with Nvidia Drive hardware-in-the-loop simulation technology. Nvidia noted that more than 35 million packages are delivered worldwide each day, and that number is growing 28% annually. By 2040, delivery services will have to travel another 78 billion miles each year to keep up with goods ordered online, according to KPMG.

Autonomous trucks can help because they can operate 24 hours a day, lowering annual costs in the U.S. for logistics as much as 45% per day and saving $85 billion to $125 billion, according to McKinsey.

“The benefits are going to be extraordinary,” Huang said. “This is a $400 billion to $500 billion industry. There are all kinds of trucks. Commercial vehicles like buses and shuttles. There are all kinds of earth movers and construction vehicles. One area where we can add value is the development of the AI software running on top of our DGX supercomputer and simulation systems.”

Huang said the tech would not necessarily reduce the number of jobs, but would help construction workers and drivers do their jobs better, extending their ability to work and to do so in a safer manner.