Bitrise, a five-year-old startup developing continuous integration and delivery solutions for mobile platforms, today announced that it has secured $20 million in a series B funding round led by Partech. The round, which saw contributions from new investor Zobito and existing investors OpenOcean, Y Combinator, and Fiedler Capital, brings Bitrise’s total raised to over $40 million, following a $3.2 million series A in July 2017. Cofounder and CEO Barnabas Birmacher says the new funds will be used to ramp up hiring in the company’s U.S., U.K., and Hungarian offices and to explore new markets.

“Mobile is the world’s most popular computing platform and critical to every business’ long-term success,” said Birmacher. “At the same time, developing for mobile is fundamentally different than any other form of software development. By acknowledging those differences, we’ve crafted a mobile CI/CD platform that unburdens and empowers close to 100,000 mobile developers to deliver their best possible work.”

Bitrise supports a wide range of platforms and frameworks, including iOS, macOS, Android, Xamarin, Ionic, Cordova, React Native, and Flutter, with customizable block-based workflows that can be rebuilt, reconfigured, specified for repeat stages, and connected together on the fly. A smart cache configures caching at setup for all dependencies, and every build runs in its own virtual machine that discards data at the end of the build.

Bitrise integrates with GitHub, GitLab, and BitBucket for end-to-end integration testing, feature merging, and deployment and offers trigger functionality that optionally builds for push, pull requests, tag events, and more. Moreover, it boasts over 180 integrations with tools like Jira and Slack and platform-specific features like autonomous code signing for iOS, compatibility with Firebase Test Lab for Android, and automatic deployment to third-party services like HockeyApp and TestFairy and stores like Google Play and iTunes connect. 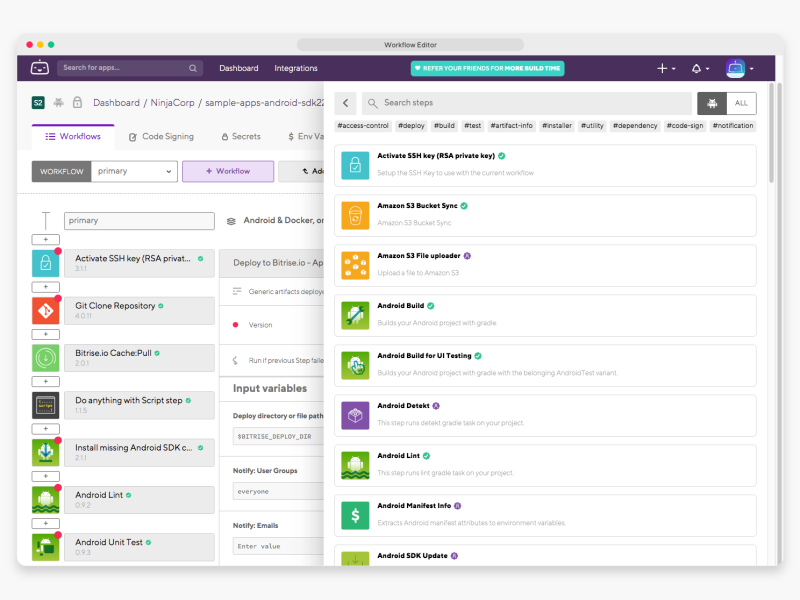 The end goal is to develop a “full” and entirely end-to-end mobile DevOps suite, according to Birmacher. He says that — thanks to a project scanner that automatically detects platform, dependencies, and configuration and creates a build, test, and deployment environment — it currently takes the average customer less than 60 seconds to add a cross-platform app to Bitrise.

“We’re investing heavily into expanding the stages of the DevOps process we cover, as well as bringing management and monitoring for all these processes together into a single screen mobile DevOps solution,” he said. “Additionally, we’re looking to double the number of supported integrations to 400 by the end of the year. All of this will mean even less time spent configuring connections to the services you use, less time looking for the metrics you need, and more time to build and operate impactful mobile experiences.”

It’s estimated that the continuous integration tools market will be worth $1.14 billion by 2023, and Bitrise is well on its way to cornering a portion of it. Companies among its growing customer base include Duolingo, Virgin Mobile, Citymapper, PagerDuty, Strava, InVision, Zeplin, Wunder, Mapbox, Runkeeper, Lovoo, Tavelex, EyeEm, and TNT.

“I believe Bitrise addresses a problem nobody else quite managed to tackle before,” said Partech general partner Reza Malekzadeh. “They allow businesses to capture the immense value represented by doing mobile ‘right’ while empowering developers to spend their time doing impactful work. We’re happy to play a role in accelerating their evolution to a full mobile DevOps platform, and I’m excited by the tremendous opportunity this represents for Bitrise, as well as the countless app developers they’ll help along the way.”