In an era of unprecedented gun crime, including frequent mass shootings, technology companies have come under scrutiny for their role in propagating such atrocities. Facebook, for example, was used to livestream the Christchurch terrorist attack in March. In the aftermath, the company conceded that while artificial intelligence (AI) can help restrict certain types of content on its platform, it likely won’t be able to stop violent broadcasts from being streamed.

A better solution, in truth, would be to prevent such horrors from happening in the first place — and AI could play a role there, too.

With that in mind, Liberty Defense is bringing to market radar imaging technology that leverages AI and deep learning to identify concealed weapons. This week, the Atlanta, Georgia-based company announced a partnership with German soccer giant FC Bayern München to beta-test Liberty Defense’s technology inside the Allianz Arena stadium in Munich.

FC Bayern München is Liberty Defense’s first customer in Europe, but it has already inked deals with a number of other notable parties, including Vancouver Arena Limited Partnership, which operates Rogers Arena; Sleiman Enterprises, a developer that runs around 150 shopping malls; and the Utah Attorney General, who has signed a memorandum of understanding to beta-test Hexwave across the state. 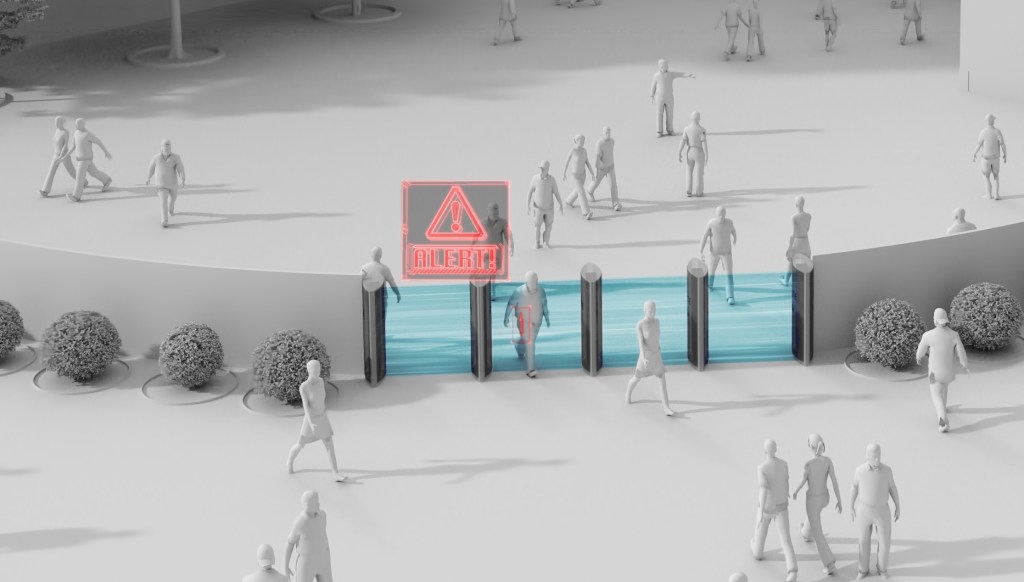 Founded in 2018 by CEO Bill Riker, who claims more than three decades of experience in the defense, aerospace, and security systems industries, Liberty Defense said it has secured an exclusive license from Massachusetts Institute of Technology (MIT), in addition to a technology transfer agreement, for patents relating to 3D radar imaging technology, which now constitute part of a product that is marketed as Hexwave.

“The reception to our Hexwave product has been fantastic, and we are excited about working alongside FC Bayern Munich, a team that is a household name in both Europe and North America,” Riker said. “Our ability to deploy in either indoor or outdoor settings with both covert and overt applications sets us apart and has also been driving increasing interest from the market.”

Hexwave’s 3D imaging technology sends low-energy radar — 200 times less powerful than Wi-Fi, according to Riker — through materials, including clothing or bags, that then bounces back off a person’s body to generate “images of threats” on the outside of the body, rather than images of the body itself. This technology is capable of displaying the outlines of guns, knives, suicide vests, and other weapons. 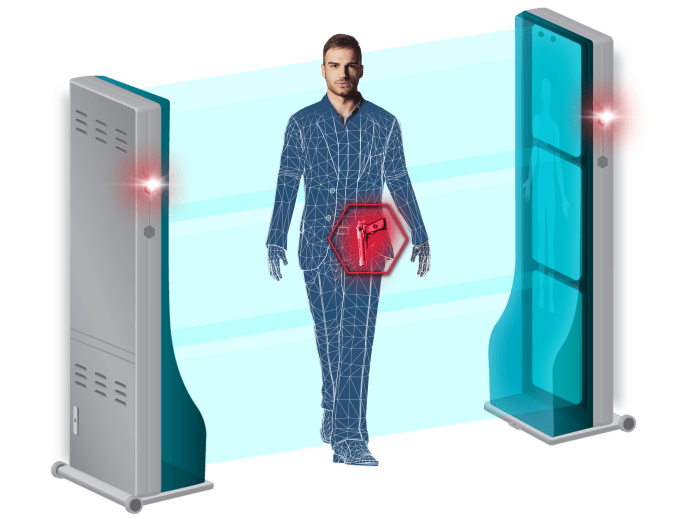 Above: How Hexwave works

Hexwave is built on technology developed at MIT: the antenna array and transceiver, which is what makes it capable of capturing real-time data, and the 3D image generation technology for converting the captured data into images. But Liberty Defense is adding its own ingredients to the mix.

Of course, X-ray is already used in many security scenarios, such as for scanning bags in airports or other venues, and it can also provide 2D scans of a person’s exterior. Millimeter wave scanners are also used in some locations for 3D body scans. But what Liberty Defense is pitching is technology that can detect potentially dangerous weapons while an individual is in motion. It’s all about speed.

“Hexwave provides 3D imaging at a rate that is in real time — it can assess for threats while the person is still walking, which means it is well suited for higher, faster throughput,” Riker told VentureBeat.

Liberty Defense has raised around $5 million to date to commercialize its product and see it through the beta phase, though it’s worth noting here that the company recently went public in Canada, following a reverse takeover of an existing public company.

“Being public helps not only our public awareness, but we believe it will enable us to gain access to the next tranche of funding that we require to continue the development of Hexwave,” the company told VentureBeat.

A number of companies are leveraging AI to help detect weapons, including Austin-based Athena Security, which uses computer vision to detect guns, though its system doesn’t work on concealed weapons. Elsewhere, a Canadian company called Patriot One develops technology similar to Liberty Defense’s, while Bill Gates-backed Evolv Technology also operates in a similar ball park. Oakland International Airport installed Evolv’s technology last year as part of an employee screening program, and it is also piloting the technology at Gillette Stadium, home of the New England Patriots.

All this movement helps demonstrate the growing demand for automating weapon detection at scale, be it at airports, shopping malls, or sports stadiums. Citing data from a Homeland Security Research report, Liberty Defense said the weapons detection systems industry is expected to hit $7.5 billion by 2025, up from $4.9 billion today, with public venues constituting around one fifth of the market.

While facial recognition holds a great deal of potential in the security realm, it’s mired in controversy over its potential for misuse, inaccuracy, and implications for personal liberty — concerns that could help technology such as AI-powered 3D imaging gain traction. Indeed, privacy is an angle Liberty Defense is actively pursuing, noting that “…no personal identifiable information is collected or viewed by security teams or other operations personnel, which helps protect the privacy and modesty of individuals.”

The company will be kicking off its live environment tests throughout 2019 and 2020 starting in North America, followed by Europe.