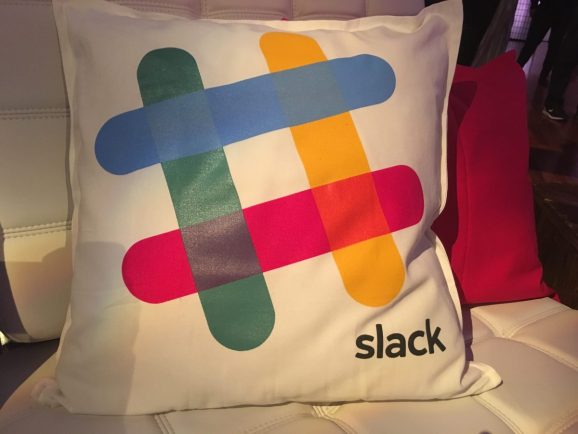 A Slack pillow at a Slack event in San Francisco on December 15.

Cultish devotion to Slack in offices around the world will propel the workplace collaboration platform to a $16 billion IPO today. But investors who have fallen under the charms of this hotter-than-hot unicorn are about to plunge their money into an extremely risky public offering.

The idea that Wall Street only wanted IPOs from companies with proven business models has turned out to be nonsense. But Slack’s odds of building a sustainable company seem long at best.

Of course, those losses have shrunk as a percentage of revenues, which shot up from about $100 million to $400 million during those three years.

But the company emphasizes that those losses are likely to start climbing rapidly again post-IPO:

We expect our operating expenses to significantly increase over the next several years as we hire additional personnel, particularly in sales and marketing, expand our partnerships, operations, and infrastructure, both domestically and internationally, continue to enhance Slack and develop and expand its features, integrations and capabilities, and expand and improve our application programming interfaces, or APIs. We also intend to continue to build and enhance Slack through both internal research and development as well as selectively pursuing acquisitions that can uniquely contribute to Slack’s capabilities. In addition, as we grow and become a public company, we will incur additional significant legal, accounting, and other expenses that we did not incur as a private company.

At the same time, Slack’s growth is slowing. The company has forecast annual growth of 49% for the year, down from 67% annualized growth in the first year of its fiscal quarter. It’s also below the 82% and 110% growth of the previous two fiscal years.

Yes, such slowing is typical as companies get larger. But if they are wildly unprofitable, like Slack, and their expenses are going soar, like Slack’s, then slowing growth heading into an IPO is problematic. And that doesn’t even take into count ongoing competition from companies like Cisco and Microsoft.

The result, of course, is that Slack makes the usual disclaimers companies make in such filings about not being sure it can ever be profitable. In this case, it sounds more ominous than usual.

Of course, we’ve seen a parade of IPOs from money-losing unicorns this year. Pinterest has done okay post-IPO, managing to still trade above its opening day price. Lyft surged on the first day of trading and then plunged, and it has spent most of the year of dreaming about getting back to its IPO price. Uber finished the first day of trading down and then fell some more, but it has now almost scratched its way back to its IPO price.

Slack’s performance today will be hard to predict, as the company is using the direct listing method. This means it won’t actually raise any money but will instead take the path Spotify took and simply let its stock begin trading today.

The latest word is that the initial price of the stock will be $26 per share for a $15.7 billion valuation, but that’s more of an imprecise attempt to estimate the beginning value than a fixed number determined by the company. Expect the price to go much higher today.

Because love is blind. And people, probably including the humans on Wall Street, love Slack. So a big first day will indicate a lot of emotional investing and a desire to be in on the hot thing that everyone is talking about.

It’s the longer-term fuzziness in Slack’s business model that should have investors worried. But don’t bet on that happening today.