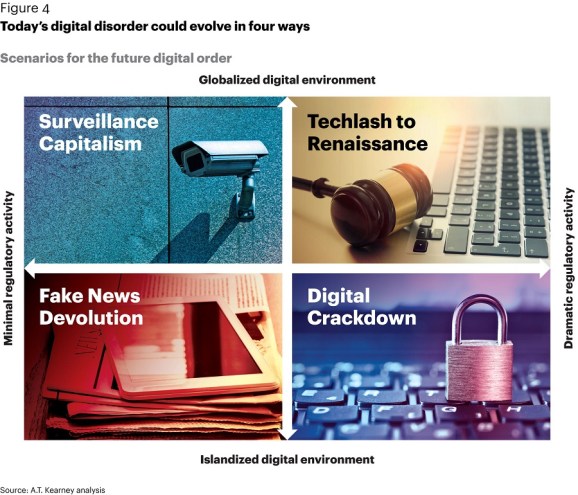 How digital disorder could wreck our future through 2030.

A.T. Kearney said companies should get used to an age of “digital disorder,” characterized by an increasingly complex patchwork of policies and regulations intended to manage the digital economy amid growing geopolitical competition.

But the global management consulting firm predicted in a report that a new digital era will emerge by 2030 — and the trajectory of the global regulatory environment for technology, as well as the extent to which the internet remains open, will determine the contours of this period.

The firm saw different possible futures, with fears about a new “digital cold war” and the “splinternet,” in which the internet becomes more Balkanized, forcing companies around the world to shift strategies on everything from procurement to customer engagement.

In a new report by A.T. Kearney’s Global Business Policy Council, “Competing in an Age of Digital Disorder,” the firm warned that companies cannot afford to passively observe the digital revolution. 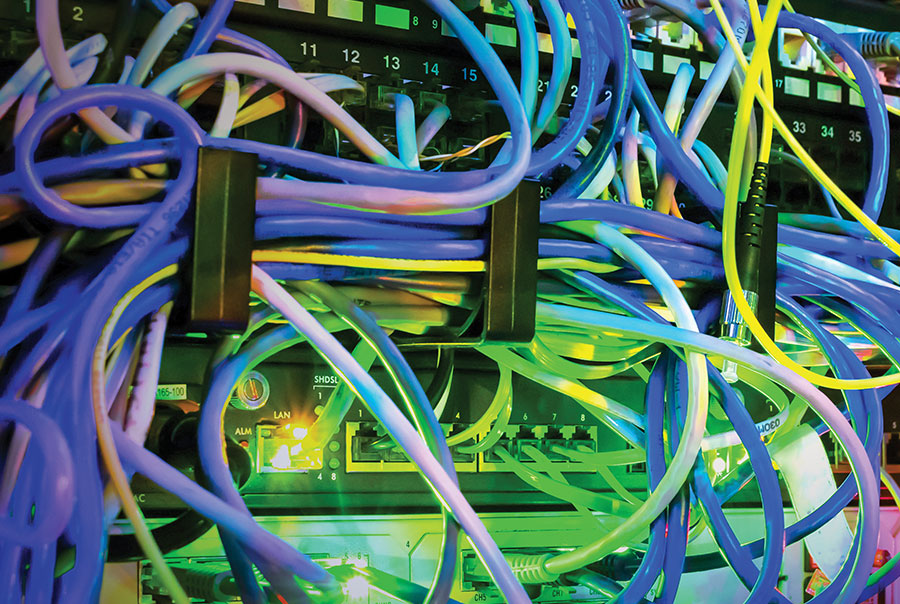 Instead, they must actively adapt to the present disorder while also preparing for the future digital order by embarking on strategic end-to-end digital transformations.

Much attention is focused on the “techlash” behind new policies on key issues such as consumer privacy, data protection, and anti-competitive practices. But many governments are now seeking to strike a balance with policies that maximize digital’s upsides and mitigate its downsides as they prepare to regulate the ecosystem for the first time. Either way, government actions will influence companies’ ability to use digital technologies effectively in the coming years.

“This cycle of innovation, adoption, and then regulation is consistent with previous waves of technological change,” said Paul Laudicina, chair of A.T. Kearney’s Global Business Policy Council and a coauthor of the report, in a statement. “Today, the intense regulatory debate regarding digital technologies is creating a high degree of uncertainty about how the policy environment will evolve.”

After providing an extensively researched background on the opportunities and pressures facing societies, governments, and businesses in this period of digital disorder, the study offers four scenarios for the emerging digital order. 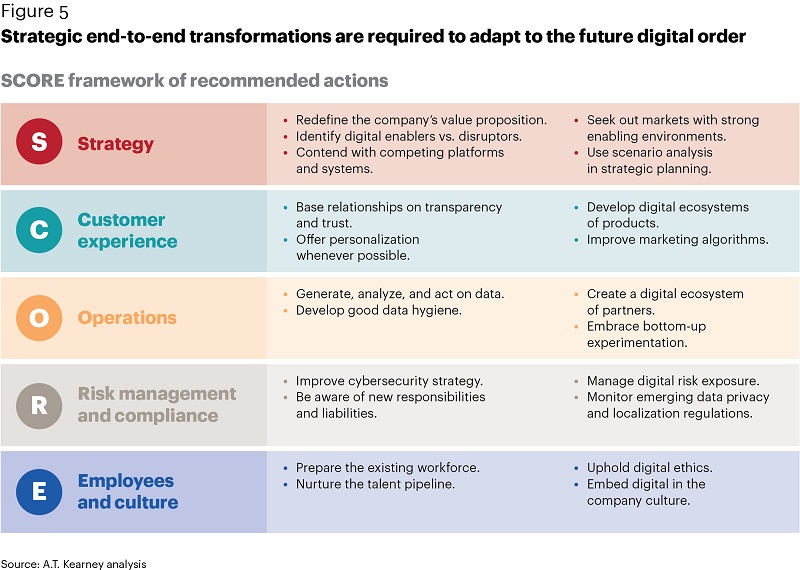 Above: The digital disorder horizon

These scenarios are based on two unfolding political uncertainties:

“These scenarios are designed to be compelling and plausible visions of the future that challenge and test executives’ capacity to anticipate and plan for their companies’ digital strategies in the coming years,” said Erik Peterson, managing director of the Global Business Policy Council and a coauthor of the study, in a statement. “In fact, some aspects of these scenarios, such as the
emergence of a digital ‘cold war’ between major global powers and early indications of a ‘splinternet,’ are already playing out in various markets around the world.”

Finally, the study argues that executives will need to guide their organizations through strategic digital transformations across a variety of business functions.

“Companies must adapt to the emerging digital order across strategy, customer experience, operations, risk management and compliance, and employees and culture — our Score framework,” said Courtney Rickert McCaffrey, manager of thought leadership for the Global Business Policy Council and a coauthor of the study, in a statement. “To compete in the 21st-century digital economy, companies must embark on end-to-end digital transformation in all SCORE areas.”