Zillow says it’s now leveraging computer vision to improve the accuracy of its Zestimate appraisals. The Seattle, Washington-based real estate management and listings company today launched a new benchmark that considers homes’ visual highlights in tabulating property prices and then adjusts those estimates for locations on the market to account for real-time sales data.

“The new Zestimate was inspired by the way the human brain interprets scenes, objects, and images,” said Zillow chief analytics officer Stan Humphries. “It’s a big leap forward, because it means the Zestimate can now understand not just a home’s facts and figures, but its quality and curb appeal.”

To that end, the Zestimate now leverages AI models trained on millions of photos from sellers, listing agents, and homeowners. It’s tuned such that highly desirable and in-demand features, like new granite countertops and remodeled bathrooms, have a greater pull on a home’s estimated market value. Even natural light and curb appeal make a difference, according to Zillow, as do touches like high-end finishes, fireplaces, remodeled kitchens, updated fixtures, and well-manicured lawns. 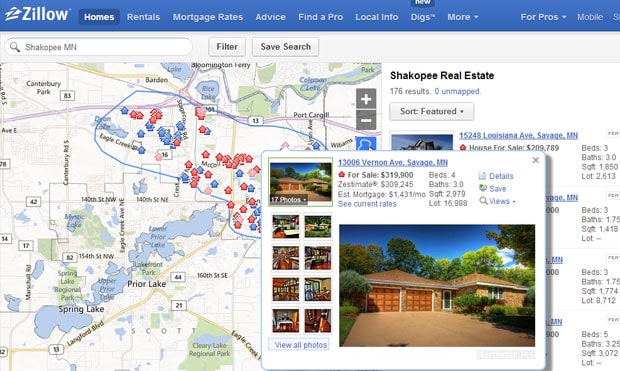 Zillow says that over the roughly 100 million property values it’s caluclated for homes nationwide, the error rate is now less than 2%, meaning that half of all estimates fall within 2% of the home’s eventual sale price. That’s down from 4% in April.

Home snapshots aren’t the only thing Zillow uses to calculate a Zestimate, of course. It taps data from county and tax assessor records and direct feeds from hundreds of listing services and brokerages, as well as facts contributed by homeowners, including road noise and commute times. (Zillow says that 70 million home listings have been updated by its community of users.) And all those funnel into the 7.5 million statistical and machine learning models responsible for determining the final estimated property value.

It’s the second major Zestimate upgrade this year. In January, Zillow awarded $1 million to a team participating in the Zillow Prize, an open contest on Google-owned machine learning community Kaggle that reduced the home valuation error to below 4%. At the time, the company said it expected the optimizations would bring most Zestimates $1,300 closer to the actual price.

Zillow, which says its mobile real estate apps are the most popular in their respective categories, is increasingly investing in AI in an effort to remain ahead of competitors like Trulia, Redfin, Homesnap, and Realtor.com. In April, it rolled out 3D Home, an AI-powered iOS app that stitches photos captured by a phone’s camera or a compatible external camera into virtual walkthroughs. Processed tours populate a dashboard, where they can be edited, shared privately, or added directly to a home listing

Zillow is also investing in homes directly. Earlier this year, the company revealed that it has begun buying and selling properties in the Phoenix market, where it is targeting homeowners through its Instant Offers program. It’s a lucrative gig, the company says: Zillow projected upwards of $255 million in revenue from 300 to 1,000 homes last year.