Enterprise AI adoption continues to climb, with analysts at Gartner estimating that 37% of organizations now implement AI in some form or another, whether as customer support chatbots or expense-expediting receipt scanners. And companies say they’re already reaping the benefits of automation, with 82% telling Deloitte in a recent survey that they expect a positive return on their AI investment in 2019.

San Francisco-based Aera (formerly FusionOps) develops data processing and augmentation products powered by machine learning. It has ridden the corporate AI wave rather successfully, raising $25 million in April 2016 and another $50 million in June 2017. But the company is now ramping things up a notch.

Aera today revealed that it has secured $80 million in a new round round led by DJF, a growth VC firm with investments in such startups as Twilio and Box. The influx of cash brings the 12-year-old company’s total raised to just over $170 million, and cofounder and CEO Fred Laluyaux — former CEO of Anaplan — says it will be used to support development of current and future products.

Aera’s offerings tap natural language processing and domain knowledge to drive what Laluyaux calls “cognitive automation.” Its crawling technology collects, indexes, and reconciles up to “billions” of transactions from internal and external systems before sending the encrypted results to the cloud, enabling real-time analytics without impacting the underlying data sources. 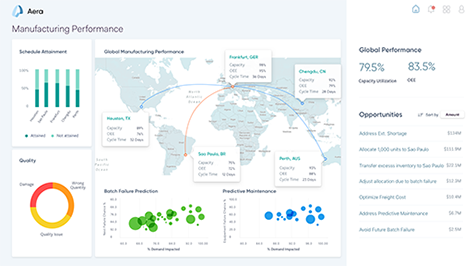 Above: One of Aera’s customizable dashboards.

Aera’s processing engine correlates and normalizes raw data into a single model, building graphs that reveal relationships and dependencies among products, customers, and vendors. On the analytics side of the equation, it uses cross-functional joins, multilevel aggregations, and calculations in its in-memory analyses and exposes models comprising thousands of predefined measures tailored to sales and other scenarios. Managers can search these graphs using natural language and see role-based and contextually sensitive results or program alerts that highlight risks and opportunities.

Aera’s platform boasts a skills designer that allows customers to create apps for personalized insights, recommended actions, calculations, workflows, and intelligent conversational voice interactions. It also hosts a library of prebuilt skills that combine data crawlers, content libraries, and data models and logic. For instance, the Supply Chain 360 skill offers visibility into demand, supply, production, and inventory with a suite of metrics and trends collated in a cloud dashboard, while the Predictive Sourcing skill offers visibility and insights into deliveries, quality, and spend and forecasts supplier delivery and subsequent business impact.

In the coming weeks, Aera intends to make generally available three new products: Cognitive Workbench (which was announced late last year) and Cognitive Decision Board. The former autonomously identifies and prioritizes opportunities and risks, recommending actions and maintaining a memory of the consequences in order to improve organization-wide decision-making. Meanwhile, Cognitive Decision Board lets executives and managers monitor high-priority opportunities and ensure they’re acted on swiftly.