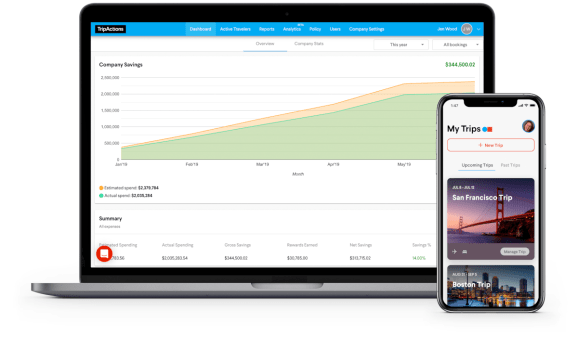 Corporate travel booking and management company TripActions today announced the close of a $250 million funding round that raises its valuation to $4 billion. Andreessen Horowitz led the round, with participation from Zeev Ventures, Lightspeed Venture Partners, and Group 11.

This series D follows a $154 million round in November 2018 that was also led by Andreessen Horowitz and brought the company’s valuation to $1 billion.

“We still have most of the funds from our previous round, but we want to begin to accelerate everything, to accelerate development of our enterprise-grade product, to grow globally even faster,” TripActions CEO and cofounder Ariel Cohen told VentureBeat in a phone interview.

TripActions takes a mobile-first approach, employs user activity monitoring to minimize clicks, and taps machine learning that ranks booking search results based on a user’s previously stated preferences. The company credits this approach with its 90% adoption rates within companies that use its service.

TripsActions’ solution can provide central billing for administrators and reduce planning for the majority of business trips down to a matter of minutes, cofounder and CTO Ilan Twig told VentureBeat. The company also provides touches clients expect from a travel program, like taking care of employees on the road.

“We are doing proactive support. We know we should reach out to you because probably something … has happened on your trip — and users love it,” he said. “It’s creating a win-win between the corporate and the employees, and that’s actually the reason we’ve been growing at a 5 times rate year-over-year.”

The company has nine offices globally — in cities like Amsterdam, London, and Sydney and in Chicago, New York, Seattle, and San Francisco in the United States.

TripActions has raised over $480 million and currently has more than 700 employees.