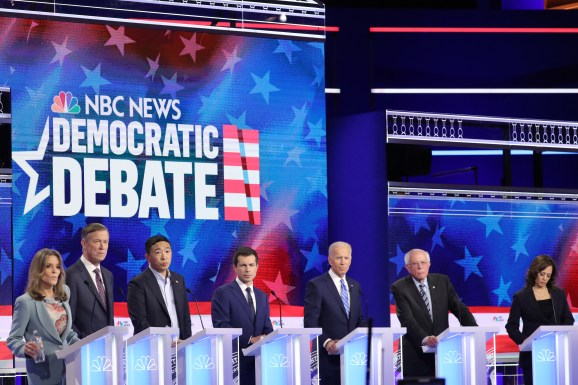 This week, 2020 presidential hopefuls took the stage in Miami for the first Democratic primary candidate debates. At times the whole thing felt a bit like a reality show, because some desperate people knew they wouldn’t make it to the next round, but also because of a smattering of meme-worthy moments.

I know nobody wants political content on this account but it's 2:30am and I am awake and putting Marianne Williamson's speech to Twin Peaks music pic.twitter.com/fSjP5wzrnR

Most debate time went to issues like health care, climate change, or immigration after the tragic, avoidable deaths of children along the U.S.-Mexico border in recent weeks. And notably, Elizabeth Warren defended her position that Google, Facebook, and Amazon should be broken up.

China was a hot topic. At the end of night one, several candidates referred to China as the biggest external threat the United States faces today. That sentiment was echoed during the second night of debates, and it’s a judgment no doubt made in part because of a number of economic and military-related issues, but also because of China’s stated desire to become a world leader in AI within approximately the next decade.Tech investor Andrew Yang said his first call as president would be to China, to work together on issues like AI.

South Bend, Indiana mayor Pete Buttigieg talked about Chinese AI investments as more important to the U.S. than present Trump administration arguments over tariffs. “China is investing so that they could soon be able to run circles around us in artificial intelligence, and this president is fixated on the relationship as if all that mattered was the balance on dishwashers,” he said.

Buttigieg further asserted that in order to compete, we must be an alternative to China, who he said is “using technology to perfect dictatorship.” He continued, “If we really want to be an alternative, a democratic alternative, we actually have to demonstrate that we care about democratic values at home and around the world.”

Outside of the U.S., while China is sometimes seen as dystopian because of its social credit score and use of facial recognition to track people like its Uighur Muslim minority, the European AI community is talking about the creation of a third way to incorporate AI into business and society. EU experts said this week AI consistent with EU democratic values means no mass surveillance or social credit score.

In a meeting held at Stanford University last month, members of the public stressed the importance of international coalitions and the U.S. Department of Defense being an international leader in AI ethics.

The White House emphasized work with “international allies” in a recent revision of the U.S. AI R&D strategy. Futurist Amy Webb’s The Big Nine imagines what our world, shaped by tech giants in the U.S. and China, will look like in the decades ahead. In the most ideal scenario, she envisions international coalitions being formed around the responsible use of AI, similar to the role NATO played during the Cold War, tying democratic nations together for collective action.

Like Cold War debates over democracy and communism, U.S. leadership in AI will depend on more than economic influence or military might, but also on adherence to our own values. They’re often talked about separately, but in this context, all of these issues — the humane treatment of asylum seekers, the future of AI, China’s New Silk Road and growing influence — are connected.

We’re more than 400 days away from Election Day 2020, but no matter who becomes the 46th president of the United States, building AI into business and society in the years ahead may depend on building bridges with allies, and loyalty to our own democratic values. Only then will we be able to envision a better world, and then build it.

Send your news tips to Khari Johnson and Kyle Wiggers — and be sure to bookmark our AI Channel and subscribe to the AI Weekly newsletter.