The San Francisco-based company unveiled Uber Pro back in November as part of a broader charm offensive to regain public support ahead of its IPO. For the U.S. launch, Uber Pro offered drivers benefits based on their ratings and trip cancellation rates, with some drivers promised earnings of up to 6% more on their time and distance rates, fuel cash back, car maintenance discounts, and tuition for courses through Arizona State University (ASU).

Back in May, the company expanded Uber Pro to most of its major U.S. markets and teased a new pilot program for Mexico. Today, Uber Pro is officially landing in Mexico, with full details about the various driver perks available for locations such as Mexico City, Tijuana, Guadalajara, and a handful of other cities. The program is also launching in India today, where it will be known as Uber Plus. It will be available in Mumbai, Chandigarh, and Delhi NCR. According to this legalese, the Indian rollout is just a pilot to begin with.

Ultimately, this launch represents the start of a bigger global Uber Pro rollout. Although Uber didn’t offer more specifics, according to screenshots shared by the company, it appears that Uber Pro is also being tested in French- and Portuguese-speaking markets. And there is already a landing page for drivers in France, which further hints at the company’s upcoming international expansion plans for Pro. 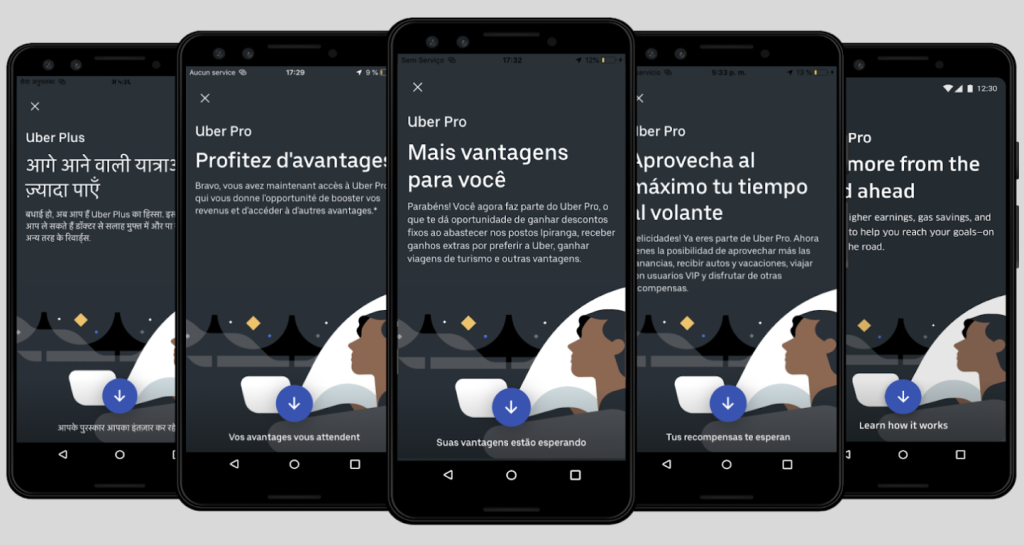 The perks available to drivers in each market will vary — in India, drivers will apparently receive “free medical consultations,” education discounts, and “micro-credit loans.” In Mexico, drivers are being offered “discounted, flexible study programs” through a partnership with UTEL, as well as a debit card with rewards based on spending, and access to Instant Pay.

While these various perks may be welcomed by many, it’s safe to say the one “perk” drivers would prefer is higher take-home pay — Uber has faced criticism on a number of fronts, but particularly over the amount of money its drivers earn once expenses, commission, and taxes are taken into account. Some reports also suggest that ride-sharing companies don’t pass on the extra fees they charge for surge pricing.

In its pre-IPO filing with the U.S. Securities and Exchange Commission, Uber openly acknowledged driver dissatisfaction. “While we aim to provide an earnings opportunity comparable to that available in retail, wholesale, or restaurant services or other similar work, we continue to experience dissatisfaction with our platform from a significant number of drivers,” the company said.

And as it battles to reduce costs and hit profitability (something that could be a long way off), the company suggested it may have to eat into driver earnings. “As we aim to reduce driver incentives to improve our financial performance, we expect driver dissatisfaction will generally increase,” it said.

So while performance-based incentive systems such as Uber Pro are arguably something to celebrate, what drivers really want is more cash for their hard work.