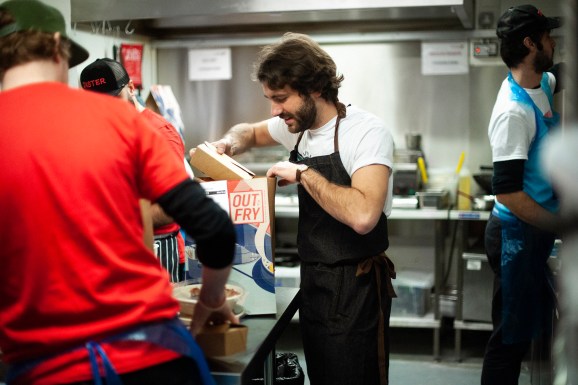 Taster CEO and founder Anton Soulier in the kitchen.

The rapid rise of meal delivery services is happening in plain sight, as companies like Deliveroo and Uber Eats send riders and drivers zipping around town with takeout of every variety. But as so often happens with new platforms, a secondary and less visible revolution is rippling across the restaurant industry thanks to the rise of virtual kitchens.

London-based Taster is an example of how the intersection of meal delivery services, artificial intelligence, and data is creating opportunities that threaten the restaurant industry with even greater disruption. While meal delivery services initially seemed like a boom for local restaurants, it is virtual kitchens — with their ability to optimize and automate — that may ultimately win the food wars.

Taster was founded two years ago by Anton Soulier, an early employee of Deliveroo who wanted to take this food transformation further.

“I thought there was a big opportunity to build a food company on top of these platforms,” he said. “They are really good at the logistics. My job is to provide the food.”

Delivery services are powering a fundamental shift in the way people buy and consume food, gradually reducing the amount of cooking people do at home in favor of prepared meals delivered on-demand. In 2018 report “Is the Kitchen Dead?“ UBS projected that the $35 billion meal delivery economy would grow to $365 billion by 2030.

That includes newcomers such as CloudKitchens, a startup from former Uber CEO Travis Kalanick that offers space for chefs who want to launch delivery-only brands. Last year, California-based Kitchen United raised $10 million to expand its warehouses, which offer cooking space to delivery-only startups. And earlier this year, Berlin-based Keatz raised $13.5 million in new funding for its network of virtual kitchens in places like Berlin, Amsterdam, Madrid, Barcelona, and Munich.

Meanwhile, delivery platforms themselves have also gotten into the food preparation game. Two years ago, Deliveroo launched Deliveroo Editions to offer data and kitchen space to delivery-only restaurants. Uber has also reportedly been dabbling in this space, testing a service to rent kitchen space to virtual brands. And it’s also working with existing retail restaurants to use their kitchens to house virtual brands that only are available on UberEats.

This means Taster is facing an intensely competitive landscape. Consolidation among these efforts will likely be inevitable. But a look at how Taster works today offers a glimpse into why this trend toward virtual kitchens is accelerating.

The startup operates a series of kitchens in London, Paris, and Madrid, where it prepares meals that are only available by delivery. These are sold under brands that only exist on these services’ various apps: Out Fry (Korean fried chicken), O Ke Kai (Hawaiian food), and Mission Saigon (Vietnamese). From a consumer perspective, Taster as a brand doesn’t appear in any marketing for these virtual kitchens.

This approach confers a number of immediate advantages over incumbent restaurants. There is no need for a dining room or a pickup counter, which means savings on real estate. Everyone working is solely focused on food preparation, cutting out front of house expenses. And the kitchens can be used to launch additional virtual brands as new opportunities emerge.

“I was watching how people were using Deliveroo every day,” Soulier said. “The growth was just amazing. But traditional restaurants, where you cook for a human coming to eat there, they weren’t very well adapted to a delivery model.”

Because a service like Taster was conceived for delivery, packaging was designed to keep food fresh and hot and menu items are chosen with the idea that they will not be consumed right away, Soulier said.

This approach gets even more powerful when it’s combined with the data Taster receives from delivery platforms, which allows the company to adjust menu items quickly, based on what is most popular, he said.

Taster’s back end is also directly connected to many of its own suppliers. So as menu items are changed, the system updates orders with suppliers.

“It’s a big challenge we wanted to tackle early,” he said. “Being able to place orders directly to suppliers, it really automates the process and reduces waste.”

That data has in turn allowed the company to begin developing its own algorithms to start projecting how supply and demand will vary according to factors like holidays and the weather. The system tracks these fluctuations and automatically adjusts orders.

This part of the business is still emerging. But Soulier is convinced that as the number of kitchens expand and the amount of data grows, the company will be able to go further with artificial intelligence to extend automation and create even more predictive, data-driven operations.

That scale and level of automation is going to make it even tougher in the coming years for single, standalone restaurants to keep up. Consumers are likely to see a growing range of niche eating options based on data collected by these platforms, further boosting adoption. And the virtual kitchen movement will further streamline operations by significantly reducing the risk associated with launching new eateries.

This transformation will ripple far beyond the ability to get sushi delivered by a bike messenger.