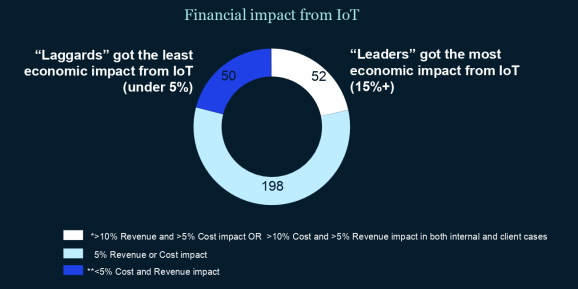 Spending on IoT is 70% behind where research firm McKinsey predicted in 2015 it would be by now — at $37 billion, it’s a fraction of the earlier projected $122 billion. McKinsey senior partner Mark Patel believes the lag in IoT adoption has less to do with the nature of technology itself, and more to do with how businesses work. “The data, self-reported in our surveys, suggests that it’s a lot about people and organizations,” he said at VentureBeat’s Transform 2019 conference.

Patel outlined three strategies that help businesses incorporate IoT into their operations and products sooner: “Lead from the top” with an agenda that starts at the level of the CEO; dedicate resources to incorporating IoT; and work with technology partners.

Elevator company Otis has started installing sensors on elevators to monitor things like when doors open and close and how long it takes them to do so. “We’re actually starting to get some really early insights on what is happening with the elevator before we actually have a mechanic show up on site,” said Neil Green, an executive at the company.

The 160-year-old company was able to implement the technology faster in a legacy industry thanks to the creation of Green’s role as chief digital officer, a position that comes with considerable authority over a wide span of related areas: IT, infrastructure, data analytics, and information security, as well as relevant partnerships, strategy, and business development related to digital initiatives.

“I get to be a little bit of a dictator in saying, ‘You don’t have a choice, this is what we’re going to do.’ And when I have the backing from the CEO, it just enables us to go even faster,” Green said.

For John Deere, the challenge is getting customers to trust tools that incorporate IoT and artificial intelligence. The strategy to achieve this has been ensuring customers understand how the enhanced machinery works and see that it “is going out there and performing the task optimally,” said John Deere engineering manager Mark Chaney.

“We need to build trust with our farming customers. It’s their bank statement that we’re dealing with, how much grain they’re going to lose or gain every year — and that takes a tremendous amount of trust,” he said.

The next question for both legacy industry companies is what to do with all that data that their IoT devices pick up. Can it remain proprietary?

“I would just say robust conversations are happening inside, always, on how we manage that. [I’d] love to have some conversations with others in the industry to see how we can get to a platform where we do maintain some competitive advantage based on the data [and] the investments that we made,” said Green.