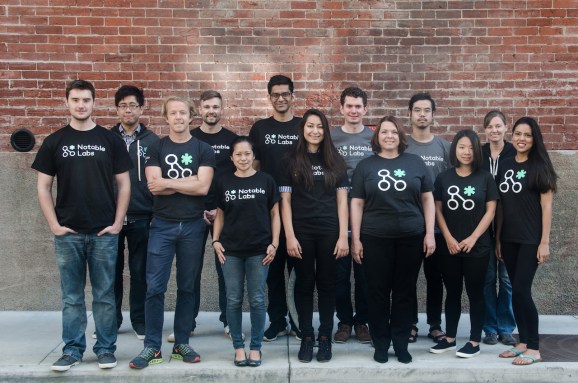 Update: Notable has raised $40 million, not the $50 million suggested by the original headline.

Notable Labs, a Foster City, California-based provider of personalized drug combination testing for cancer patients, today revealed that it’s closed a $40 million series B round co-led by B Capital Group and LifeForce Capital, with participation from B Capital and Industry Ventures. Cofounder and CEO Matt De Silva said the cash infusion brings the company’s total raised to over $55 million following a $14.8 million series A in September 2017.

“Patients with aggressive cancers are in a race against time, but if we can use technology to identify the best drug or drug combination at the time of diagnosis, there is a much better chance those therapies will work,” said De Silva, a former hedge fund manager who founded Notable in 2014 after his father developed brain cancer. “We are eager to scale the results we’ve generated with our academic collaborators by expanding our AI platform and automated laboratory to more cancer types.”

As De Silva explained, Notable’s oncological approach predicts which patients are most likely to respond to drugs by applying various treatments to cancerous cells and healthy white blood cells, and by producing a therapeutic index after recording how many of the former survive. Screenings take as little as five days, expedited in part by Notable’s fleet of sample-analyzing robots.

The company’s focus is principally blood cancers like leukemia, lymphoma, and myolema — at least for now. De Silva notes that blood cells are relatively easy to obtain, enabling tests to be conducted the same day. In the future, sometime following the launch of Notable’s ND-1000 program that will combine an existing generic cancer medication with a natural product, the company will migrate the bulk of its diagnostics to CLIA-certified labs.

On the subject of ND-1000, Notable says it meets the FDA’s Rare Pediatric Disease Priority Review Voucher Program criteria, which means that if it makes it through the clinical trial process and earns regulatory approval, the company will receive a voucher for expedited review for a different product. Vouchers, which Notable says it might use for other programs or sell to another pharmaceutical company, have an estimated market value between $60 million to over $300 million.

ND-1000 is Notable’s first drug development program, but the startup plans to announce another by the end of the year and has a total of 15 treatments in development across six types of adult and pediatric blood cancers.

Notable has conducted feasibility studies in collaboration with academic partners at Princess Margaret Cancer Center, the University of Florida, MD Anderson Cancer Center, the University of California San Francisco, Rady Children’s Hospital, and Texas Children’s Hospital so far. More recently, it collaborated with Chicago-based Tempus and researchers at Stanford to create personalized treatment recommendations for myelodysplastic syndrome patients who had unsuccessfully undergone the standard of care for their disease.

According to Notable, early clinical data in the Stanford and Tempus study indicates that Notable’s solution was 84% accurate in predicting patient response to drugs or drug combinations.

“We are very impressed with the groundbreaking work Matt and the team at Notable have done over the last few years to change how cancer can be treated with the goal of completely personalized treatment from the point of diagnosis,” said LifeForce Capital managing partner John Noonan. “LifeForce Capital is increasing its commitment to the company because of the results Notable has already achieved, and because Notable’s technology will continue to help physicians use data to make more informed decisions on which treatments and clinical trials will be most effective for each individual patient.”