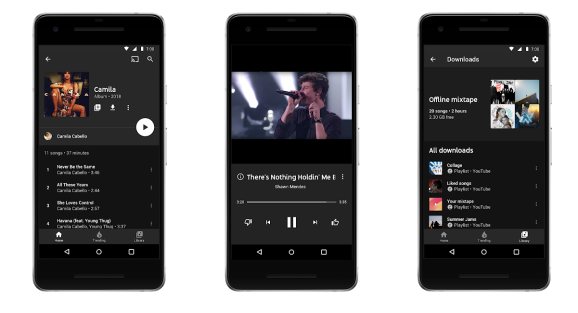 YouTube is introducing a new feature that allows premium subscribers to toggle between audio tracks and artists’ official videos.

Since May 2018, the Google-owned company has offered YouTube Music, which includes audio tracks and their associated official videos, for millions of artists. Users can also upgrade to YouTube Music Premium for $10 per month, which removes the ads and unlocks downloads and background listening. At the same time, YouTube Premium was also unveiled for $12 per month, which bundles YouTube Music while also including its premium features for all YouTube videos.

Now, those on one of the paid premium plans — YouTube Premium or YouTube Music Premium — will see a little switch at the top of their screen, allowing them to transition between an audio and video version of a song — and remain at the exact same part of the song during the switch.

To achieve this, YouTube said that it time-matched more than 5 million music videos with their corresponding audio counterparts, meaning you can now flip back and forth between the two versions without the merest hint of an interruption.

“If a song has a video, YouTube Music will surface a video button so switching between audio and visuals is just one click away,” noted YouTube Music product manager Brandon Bilinski, in a blog post.

There could be a number of practical use cases for this — a user may be listening to an album while on the move and wish to momentarily watch one of the videos for a specific track they love. They can then switch back to audio, which should also preserve battery life on their phone. Moreover, many music videos have long theatrical elements at the beginning of a track — if you can’t be bothered fast-forwarding, you can just switch to the audio version.

Earlier this week, YouTube Premium and YouTube Music expanded to 13 new markets, bringing their availability to more than 60 markets around the world.