Millions of roads around the world have yet to be mapped, and that’s a real problem, particularly in the developing world. Missing map data can harm disaster response, community planning, and local economies. And while government-run and tax-funded projects like the U.K.’s Ordnance Survey have produced enormous corpora, they’ve largely failed to freely and widely distribute them.

That’s motivated crowdsourcing efforts like OpenStreetMap, which recruit thousands of volunteers to catalog roads, buildings, and bridges every day. It’s an arduous process, but one buoyed by Facebook, which has worked with communities and partners to fine-tune a tool — Map With AI — that automates several of the most time-consuming steps.

Now, after nearly two years in development, Facebook is today making Map With AI available to the OpenStreetMap community. It includes access to AI-generated road mappings in Afghanistan, Bangladesh, Indonesia, Mexico, Nigeria, Tanzania, and Uganda (with more countries to come “over time”), and it comes with RapiD, an AI-powered version of OpenStreetMap’s editing tool iD. 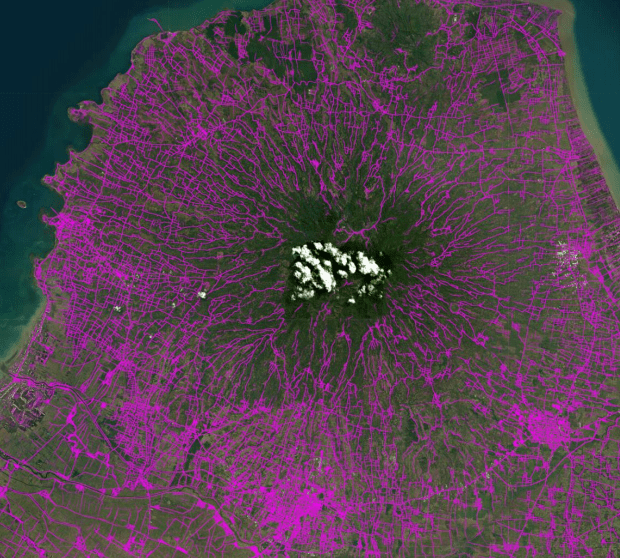 Above: The road network around Mount Muria, Indonesia. The brightness of the magenta lines indicate the model’s confidence.

“Many rural parts of the world are difficult to map on the ground. As I experienced in my previous work with the Red Cross, the challenges include remote locations, lack of power and internet access, and complicated economic and political environments,” said Facebook maps and location infrastructure product manager Drishtie Patel. “Map data gaps can affect everything, including disaster response, community planning, and helping the local economy.”

As Patel and colleagues explain in a blog post, Map With AI is designed to make adding and editing roads quick and relatively simple. It achieves this in part by leveraging a novel method of predicting road networks from commercially available satellite imagery from Maxar, which enables it to accommodate regional road differences.

A 34-layer convolutional neural network at the heart of Map With AI isolates roads in geospatial snapshots with a resolution of 2 square feet per pixel, and then it produces rasterized maps showing prediction confidence for each pixel. (In the prediction result map, the model’s confidence corresponds to the brightness of magenta lines.) Subsequently, the maps are converted into mathematical representations — vectors — compatible with OpenStreetMap’s geospatial database via postprocessing techniques.

Facebook says that in 18 months in Thailand, its team used Map With AI to suss out the remainder of the country’s 600,000 miles of roads (including over 300,000 miles of missing roads) and more than 90% of missing roads in Indonesia, a process it estimates would have taken three to five additional years if completed by hand. Moreover, the company says that in the aftermath of severe flooding in Kerala, India last year, Map With AI expedited mapping of the region by the OpenStreetMap’s humanitarian response team. 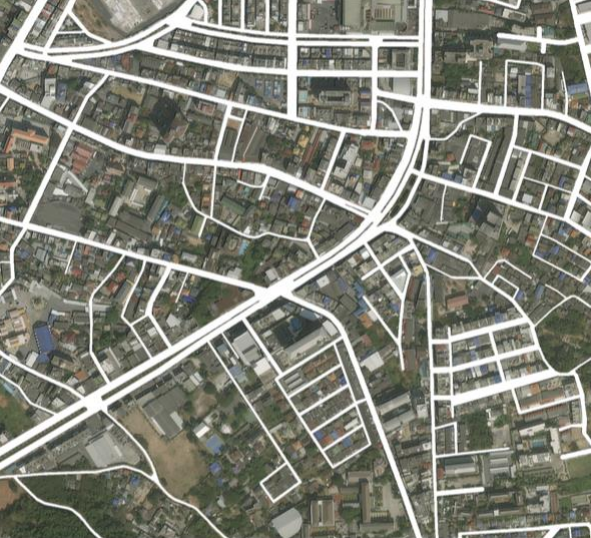 Above: Part of the data used to train the AI model to recognize roads correctly.

Mapping data like that collected in Thailand (which was manually reviewed by a team of human experts) can be used to improve the road-segmenting system’s accuracy, Patel and colleagues note, but only for the region from which it was collected; it tends not to generalize well. To address this problem, the Map With AI team investigated ways to incorporate additional OpenStreetMap data during model training.

The solution turned out to be a weakly supervised technique involving identifying regions with accurate, adequate data and converting the OpenStreetMap database’s road vectors into rasterized semantic segmentation labels. Specifically, a set of 2,048-by-2,048-pixel tiles (with a resolution of approximately 24 inches per pixel) was collected and filtered for those containing fewer than 25 mapped roads, which were discarded. The road vectors were rasterized for each remaining tile, and the resulting masks were used as training labels. Lastly, each source satellite image was randomly cropped to 1,024 by 1,024 pixels, resulting in roughly 1.8 million tiles covering more than 700,000 square miles across six continents.

The Facebook team rasterized each road vector to five pixels to create segmentation masks, which was trickier than it sounds. Roads vary in width and contour in ways that the rasterized vectors couldn’t capture perfectly, and because roads in different regions were mapped from different satellite imagery sources, they didn’t always align completely with the training data imagery.

Facebook says that with only noisy labels generated by the data collection process, it was able to produce results competitive with many entrants in the DeepGlobe Satellite Challenge, a competition launched at the 2018 Conference on Computer Vision and Pattern Recognition that seeks to advance the state of the art in satellite image analysis. After a bit of fine-tuning, the team’s model nabbed a 62% relative improvement and 13.7% absolute improvement over an identical model trained on the open source DeepGlobe data set (which contained road data only from India, Indonesia, and Thailand).

“Technology of this scale, complexity, and precision became available only in recent years,” said Map With AI engineering manager Danil Kirsanov. “This level of detail means it can spot unpaved roads, as well as alleys and even pedestrian pathways.”

But no model is perfect. That’s where RapiD comes in.

Once Facebook’s system identifies potential roads, they must be validated before they’re submitted to OpenStreetMap. Local or regional differences can affect whether roads are classified correctly, and some results mistakenly trace other satellite image features like dry riverbeds, narrow beaches, and canals or miss connection points and pathways altogether.

To ease this process, and to complement existing mapping validation tools like the Java OpenStreetMap Editor and HOT Tasking Manager, Facebook built the aforementioned RapiD, an open source extension of the iD map editor. Using a process called conflation, it combines the model’s results with data already available in OpenStreetMap, both advising on how to join new roads with existing data and preventing overwriting existing road data with suggested roads.

The RapiD editor enables reviewers to visualize the conflated roads, highlight new changes, and use new commands and shortcuts for common data cleanup tasks like adjusting the road’s classification to fit in the surrounding context. Integrity checks catch potential issues with the model’s results, ensuring that map edits are both consistent and accurate.

“Altogether, good tooling empowers mappers, reduces the tedious and time-consuming parts of drawing roads based on satellite data, increases road shape accuracy, and provides options for identifying suggested roads — even if mappers choose not to make use of those suggestions,” wrote Facebook in a blog post. “It was important to provide tooling that did not limit the capabilities and judgment of professional mappers. We will continuously improve RapiD based on feedback from these mappers to make the process smoother. We believe the resulting tooling improves the utility of satellite imagery for mapping.”

Facebook says that the mapping data validated by Map With AI — which will be publicly available — might help to inform disaster urban planning and development projects, and to improve Facebook products that use OpenStreetMap like Marketplace, Local, and Pages. 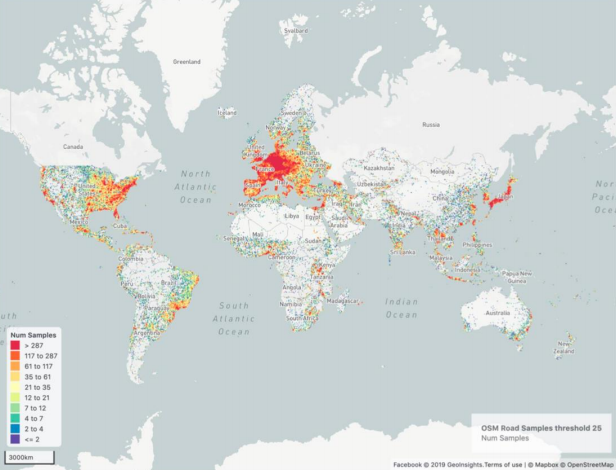 Above: Visualization of the geographic distribution of training data for the road segmentation
model.

“The RapiD tool was developed in conjunction with those in the mapping community who have been working in this area for many years. Because this tool was built with their input, it is already having an impact,” said Tyler Radford, executive director of the humanitarian OpenStreetMap team.

“RapiD is a big step forward toward meeting this goal,” Radford added. “By augmenting what was previously an entirely manual process — tracing of roads from satellite imagery — RapiD combines the best of machine learning with the best of human expertise. It supercharges mappers.”

Map With AI builds on Facebook’s other efforts to facilitate mapping with AI, as well as its ongoing population density maps project and its use of satellite imagery to detect flooding in the wake of Hurricane Harvey in Texas and fire damage in Santa Rosa, California in 2017. (Facebook previously partnered with organizations including the Harvard School of Public Health, Unicef, the World Bank, and others to produce disease-combating real-time maps powered by satellite imagery, computer vision, census data, and proprietary data.) The company says it’s developing new machine learning techniques and architectures suited to the problem space of remote sensing, and it says it’s investigating how to apply these to “road mapping work at a global scale” with supporting tooling.

OpenStreetMap — which is supported by the nonprofit OpenStreetMap Foundation — launched in 2004, and has since grown to over 5 million registered users who collect data via manual survey, GPS devices, aerial photography, and other free sources. The collated maps are available under the Open Database License for use in both traditional applications and default data included with GPS receivers. In addition to Facebook, companies like Craigslist, OsmAnd, Geocaching, MapQuest Open, Flickr, MapQuest, MapBox, Moovit, Tableau, Niantic, Snapchat, Webots, JMP statistical software, and Foursquare have tapped OpenStreetMap’s database for mapping and basic routing tasks.