Mobile messaging is the cornerstone of communications today — both WhatsApp and Messenger claim well over 1 billion users each, while Twitter claims north of 300 million users. It’s safe to say that most people — under a certain age, at least — would generally prefer to message someone than call them.

As such, businesses have increasingly embraced messaging platforms as a means of connecting with customers — the idea being that people who use such channels to chat with friends will likely use the channels to liaise with companies. Quiq, like others in the space, is setting out to capitalize on this growing push toward messaging in customer service.

Quiq offers a platform that makes it easy for businesses to integrate multiple messaging tools into their websites and apps, including SMS, Apple Messages (via Apple Business Chat), Twitter, Facebook Messenger, web chat, Kik, and Google’s RCS-based RBM. Quiq also enables companies to integrate messaging into their own native mobile apps, and it offers a one-way “broadcast” service for disseminating important messages to customers.

Today, Quiq announced it has raised $12.5 million in a series B round of funding led by Foundry Group, with participation from Teamworthy Ventures, Venrock, and Next Frontier Capital. Quiq had raised $6.5 million in a series A round of funding way back in 2016, and with its fresh cash influx it plans to build out its platform to “make it smarter” through AI and bots that “deliver the next generation of conversational commerce,” according to a statement. The company also plans to introduce what it calls the “first messaging-based shopping cart.”

“This investment validates our vision that digital engagement channels, like messaging and chat, are the future of consumer communications and that asynchronous messaging will be the foundation of the next-generation enterprise contact center,” Quiq cofounder and CEO Mike Myer said.

With Quiq integrated into a website or app, the customer clicks on whatever options a business has made available — be that live web chat, SMS, Facebook Messenger, or the rest — and can instantly message the company. 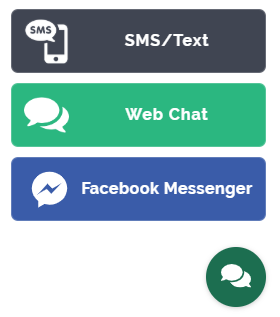 Customer service agents will see all inbound communications aggregated within a single interface. The Quiq platform can also automatically group messages together from the same user, even if the individual sends messages from different platforms — if someone messages via SMS one day and Messenger the next (for example), it would all be seen in a single conversation.

Additionally, Quiq integrates with third-party platforms such as Salesforce, so if a customer contacts a company through non-messaging channels (e.g. telephone), the information from this interaction can also be funneled into the broader cross-channel conversation. 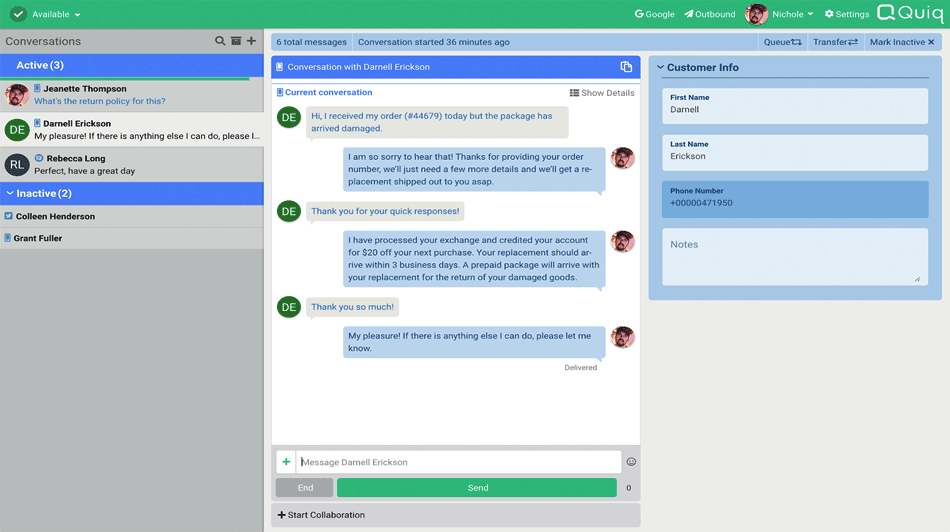 In 2019, not all communications are carried out in a traditional human-to-human exchange. This is why Quiq supports chatbots — working with those a company has embraced itself or helping businesses create their own bots to automate elements of the conversation. Such bots can be used if a human customer service agent isn’t available, to help route a query to the correct representative, to troubleshoot customer problems, or even to garner feedback. 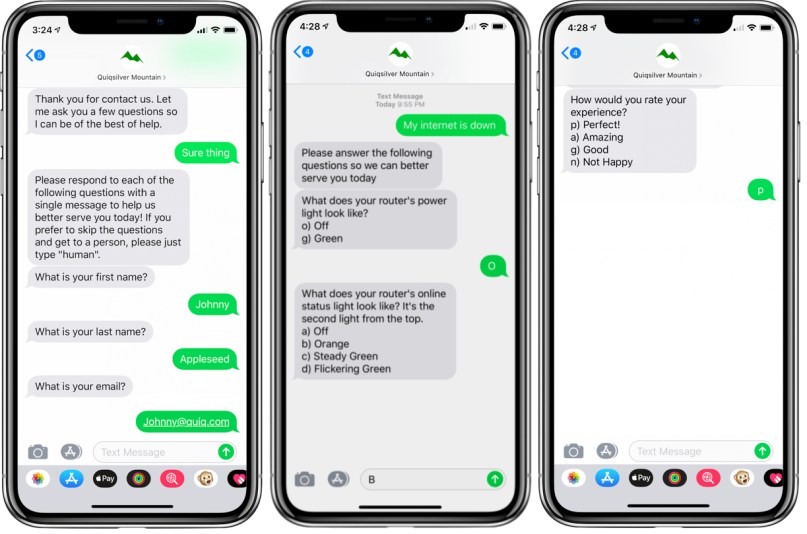 It’s worth noting that despite WhatsApp’s popularity in the messaging realm, it isn’t yet supported by Quiq — something Myer attributes to his company’s focus on its domestic market.

“Quiq is focused on first growing our business in North America before international expansion,” Myer told VentureBeat. “WhatsApp has not been a high priority for our target companies in the U.S., but it’s certainly a messaging channel we plan to add in the future. Quiq has been architected to make it easy to plug in new messaging channels.”

In terms of pricing, Quiq doesn’t charge on a per-user basis — instead it adopts a usage-based approach, meaning the more conversations a company has with its customers, the more it pays. A “conversation” is defined as any number of messages that are exchanged between the company and a customer in a 24-hour period.

By way of example, $500 per month will get a company 750 SMS conversations, 500 messaging chats, and 2000 outbound “broadcast” notifications. For $1,000 a month, those numbers are pretty much doubled, and if a company requires more, well, they’ll need to negotiate a price.

Quiq was founded out of Bozeman, Montana in 2015 as Centricient before changing its name two years later. The founding team, which includes CEO Mike Myer and William O’Neill, previously worked on a cloud-based customer service platform called RightNow, which was acquired by Oracle for $1.5 billion back in 2012. Oracle eventually rebranded the service as Oracle Service Cloud.

“Quiq’s team previously built RightNow, so we have a deep understanding of enterprise customer communications,” Myer said. “We’ve leveraged that background to evolve existing contact center concepts into a platform for the generation of asynchronous communications that seamlessly blend agents and bots, both native and third-party, into one customer conversation.”

Numerous companies have built big businesses off the back of communication APIs — including Twilio, SendBird, and MessageBird — but Quiq’s focus on contact centers and enterprise customer communications could set it apart. Moreover, its support for human agents, bots, and third-party integrations with the likes of Salesforce, Zendesk, and Oracle Service Cloud — in addition to its provision of performance-related insights and data — positions Quiq as a serious tool for customer service agents and their managers.

“Large brands rely on Quiq to manage messaging at enterprise scale, which includes not just sending and receiving messages reliably at high volumes, but also the tools that contact center managers need to gauge agent performance and make sure every customer gets a response in a timely manner,” Myer added.