In March during its GPU Technology Conference (GTC) in San Jose, California, Nvidia took the wraps off of GauGAN, a generative adversarial AI system that lets users create lifelike landscape images that never existed. In the first month following the beta version’s release on Playground, a web hub for Nvidia’s AI and deep learning research, it was used to create 500,000 images including concept art for films and video games. Now, to coincide with this week’s Siggraph conference on computer vision in Los Angeles, Nvidia is updating GauGAN with a new filter feature that layers on lighting and styles from uploaded photos.

“As researchers working on image synthesis, we’re always pursuing new techniques to create images with higher fidelity and higher resolution,” said Nvidia researcher Ming-Yu Liu. “That was our original goal for the project.”

GauGAN — whose namesake is post-Impressionist painter Paul Gauguin — improves upon Nvidia’s Pix2PixHD system introduced last year, which was similarly capable of rendering synthetic worlds but that left artifacts in its images. The machine learning model underpinning GauGAN was trained on more than one million images from Flickr, imbuing it with an understanding of the relationships among over 180 objects including snow, trees, water, flowers, bushes, hills, and mountains. In practice, trees next to water have reflections, for instance, and the type of precipitation changes depending on the season depicted. 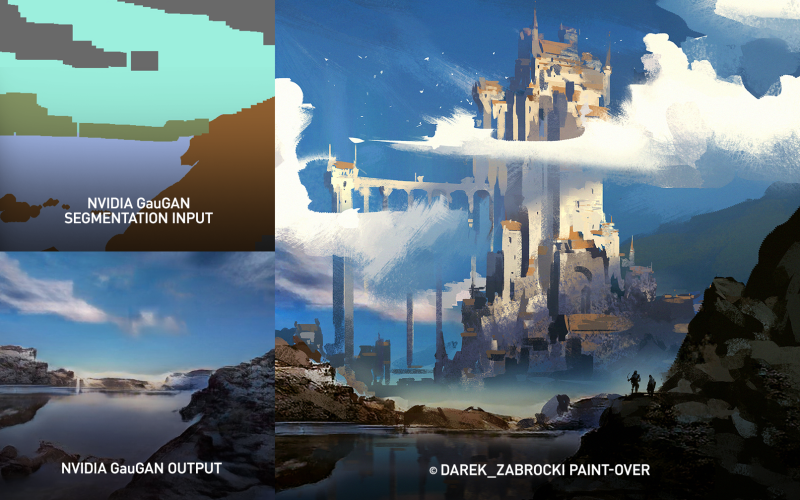 Paintbrush and paint bucket tools allow users to design their own landscapes with labels including river, grass, rock, and cloud, and the aforementioned style transfer feature lets them modify the colors and aesthetic on the fly. (For example, images can adopt a warm sunset glow, or display the cooler lights of a city skyline.) Alternatively, they’re able to upload their own landscape images, which GauGAN converts to segmentation maps — maps describing the location of objects in rough detail — that serve as foundations for artwork.

Nvidia says that GauGAN has been used by a health care organization exploring its use as a therapeutic tool for patients, and by a modeler — Colie Wertz — whose credits include Star Wars, Transformers, and Avengers movies. “We want to make an impact with our research,” said Liu. “This work creates a channel for people to express their creativity and create works of art they wouldn’t be able to do without AI. It’s enabling them to make their imagination come true.”

The code for GauGAN’s AI model was open-sourced on GitHub earlier this year, and an interactive demo is available on Nvidia’s website. GauGAN is one of the newest reality-bending AI tools from Nvidia, creator of deepfake tech like StyleGAN, which can generate lifelike images of people who never existed. Last September, researchers at the company described in an academic paper a system that can craft synthetic scans of brain cancer. And in December, Nvidia detailed a generative model that’s capable of creating virtual environments using real-world videos.