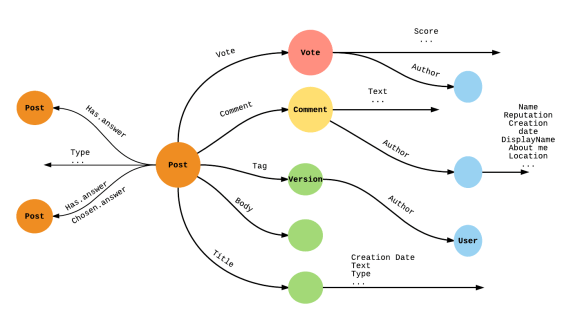 “[C]urrent ‘off-the-shelf’ solutions don’t provide the benefits they require, such as horizontal scalability, performance, multiple data models which need to be served and flexible schema, among others,” said Jain, a former Google employee who worked on the tech giant’s Web Search and Knowledge Graph project before founding Dgraph in 2015. “This is what inspired Dgraph.”

Dgraph’s eponymous flavor, which is written in Go, is open-sourced under the Apache 2.0 license and uses a version of Facebook’s GraphQL as its default query language. It shares data horizontally and uses an adaptable schema to break queries into subqueries that run in parallel, enabling it to achieve low latency and reliably high throughput.

Jain claims that Dgraph is currently in production systems ranging from gaming services, advertising platforms, fraud detection frameworks, and search engines to internet of things backends, medical research suites, and machine learning and AI tools. “Most companies do not have the capability or desire to spend millions of dollars building a custom graph database,” he said. “Dgraph is designed to execute equally well on graph style joins and traversals and SQL style selects, providing the only truly scalable general-purpose graph database available today.”

Markets and Markets anticipates the graph database market will reach $2.4 billion by 2023 from $821.8 million in 2018, and analysts at Gartner expect that enterprise graph processing and graph databases will grow 100% annually through 2022. Startups like Neo4j, TigerGraph, MongoDB, Cambridge Semantics, DataStax, and others have risen to meet the need, in addition to incumbents like Microsoft and Oracle. Even Amazon threw its hat in the ring in November 2017 with the launch of Neptune, a fully managed graph database powered by its Amazon Web Services division.

“I was immediately inspired by Manish’s vision to deliver the first general-purpose graph database,” said Redpoint Ventures partner Satish Dharmaraj, who plans to join Dgraph’s board of directors. “In an industry that has only seen incremental advances over the last several years, Redpoint is excited to partner with Dgraph on its mission to bring the the only truly scalable graph database to the market. We look forward to working with Manish and the team as the company continues to grow and scale.”