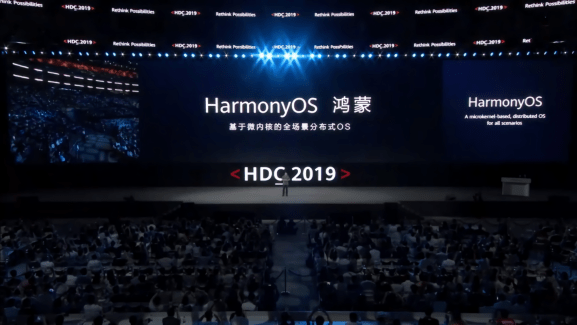 Huawei unveils HarmonyOS at its developer conference in China.

In response to the U.S. government’s decision to effectively ban Huawei equipment from stateside cellular networks, the Beijing-based company asserted in May that it was readying an in-house operating system (OS) for launch on devices in China by year-end 2019. Today at its developer conference in Dongguan, China, Huawei formally announced the OS — HongmengOS, or HarmonyOS in English — and revealed that it will ship not only on future mobile devices, but on in-vehicle systems, smart speakers, and wearables, too.

Huawei expects the first version of HarmonyOS — HarmonyOS 1.0 — to arrive with unnamed smart screen products due out in the coming months. (Reuters reported this week that Huawei-owned Honor would bring HarmonyOS to a smart TV and potentially a smartphone.) China will be the initial focus ahead of an expansion to other markets in mid-2020, and Huawei says it plans to “optimize” and “gradually adopt” HarmonyOS across a range of devices over the next three years.

“We’re entering a day and age where people expect a holistic intelligent experience across all devices and scenarios. To support this, we felt it was important to have an operating system with improved cross-platform capabilities. We needed an OS that supports all scenarios, that can be used across a broad range of devices and platforms, and that can meet consumer demand for low latency and strong security,” said CEO Richard Yu onstage. “These were our goals with HarmonyOS. HarmonyOS is completely different from Android and iOS.”

Hauwei describes HarmonyOS as a “lightweight” and “compact” operating system that’s microkernel-based, meaning the underpinning kernel — which acts as an interpreter between software and a central processing unit — contains the near-minimum amount of required functions and features. To this end, it provides only basic services, like thread scheduling, and has roughly one-thousandth the amount of code contained within the Linux kernel, enabling it to achieve up to 5 times the efficiency of existing systems, with respect to inter-process communication.

HarmonyOS’ microkernel implements a number of system services in user mode (i.e., when HarmonyOS is running a user application) outside of the kernel. On the security front, Huawei says it implements formal verification methods and “mathematical approach[es]” in a Trusted Execution Environment (TEE) to validate the integrity of software paths.

Fortunately, performance doesn’t suffer for it. HarmonyOS features a distributed architecture and virtual bus technology that unifies communications, data management, task scheduling, and virtual peripherals, ostensibly eliminating the need for developers to deal with the complexities of distributed apps. Moreover, thanks to what Huawei calls a Deterministic Latency Engine, which sets task execution priorities and time limits for scheduling in advance, HarmonyOS can reduce app latency by up to 25.7%.

So what about the third-party developer experience? Well, HarmonyOS boasts a multi-device integrated development environment, a multi-language compilation pipeline, and a distributed architecture kit that can automatically adapt to different screen form factors and layouts. And it supports both drag-and-drop control and preview-oriented visual programming, enabling developers to code apps once and deploy them across multiple devices.

Yu said HarmonyOS will be open-sourced in the near future, adding that Huawei intends to establish an open source foundation and an open source community to support its development.

“HarmonyOS is a microkernel-based distributed OS that delivers a smooth experience across all scenarios. It has trustworthy and secure architecture, and it supports seamless collaboration across devices,” said Richard Yu. “We believe HarmonyOS will revitalize the industry and enrich the ecosystem. Our goal is to bring people a truly engaging and diverse experience. We want to invite developers from around the world to join us as we build out this new ecosystem. Together, we will deliver an intelligent experience for consumers in all scenarios.”

Huawei’s announcement comes as the U.S. contemplates easing trade restrictions on the company and its subsidiaries as soon as this year. Escalating tensions with China threaten to put the kibosh on those plans in the near term — Bloomberg reported yesterday that the White House will delay a decision about granting licenses that would allow U.S. companies (including Google and Intel) to restart business with Huawei, in light of China’s decision to halt purchases of U.S. farming goods.

Huawei founder and CEO Ren Zhengfei said in June that the U.S. ban would cost Huawei in the neighborhood of $30 billion in lost revenue.