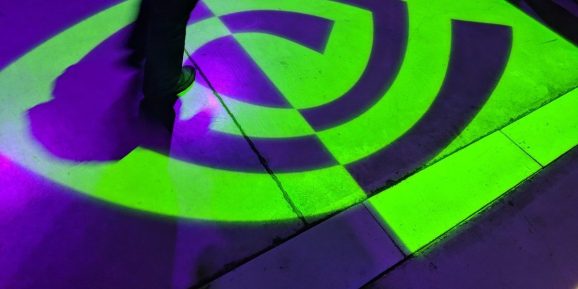 Nvidia today announced that it has trained the world’s largest language model, just the latest in a series of updates the GPU maker has aimed at advancing conversational AI.

To achieve this feat, Nvidia utilized model parallelism, splitting a neural network into pieces with a technique for creating models that are too big to fit within the memory of a single GPU. The model uses 8.3 billion parameters and is 24 times larger than BERT and 5 times larger than OpenAI’s GPT-2.

Nvidia also announced the fastest training and inference times of Bidirectional Encoder Representations (BERT), a popular model that was state of the art when it was open-sourced by Google in 2018.

“Without this kind of technology, it can take weeks to train one of these large language models,” Nvidia applied deep learning VP Bryan Catarazano said in a conversation with reporters and analysts.

GPUs have also enabled gains for Microsoft’s Bing, which has used Nvidia hardware to cut latency time in half.

Each of the advances introduced today is meant to underline performance gains Nvidia’s GPU can provide for language understanding. Code for each of the above feats was open-sourced today to help AI practitioners and researchers explore the creation of large language models or speed training or inference with GPUs.

Alongside a sharp decline in word error rates, reduced latency has been a major enabler of adoption rates for popular AI assistants like Amazon’s Alexa, Google Assistant, and Baidu’s Duer.

Evolution of the state of the art for conversational AI systems has largely revolved around the evolution of Google’s Transformer-based language model in 2017 and BERT in 2018.

Since then, BERT was surpassed by Microsoft’s MT-DNN, Google’s XLNet, and Baidu’s ERNIE, each of which builds on BERT. Facebook introduced RoBERTa –also derived from BERT — in July. RoBERTa is currently ranked atop the GLUE benchmark leaderboard, with best in four of 9 language tasks. Each of the models outperforms human baseline on GLUE tasks.